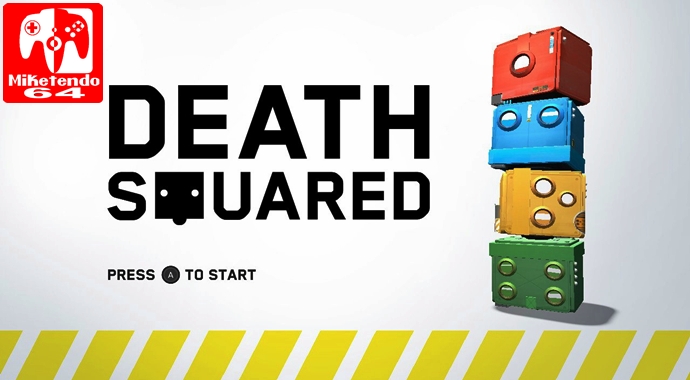 What’s that you say? You love the Switch but want to play a game that doesn’t fall into the “Adventure” or “Fighting” category? That’s quite alright as this month (July), the likes of SMG Studio’s Death Squared comes to Switch and you know what, it’s actually pretty good!

For the uninitiated, Death Squared is a puzzle game that can be played on your own or with friends and yes the latter is most certainly the best way to play. Why? Well when playing on your own, it means you have to solve every puzzle on your own and with 80 Story levels to play through and 40 Party levels, which all feature maddening puzzles, there is only so much you can take before either the frustration and rage quitting gets you, or the puzzle you’re facing puzzles you so much, you can’t help but ask for assistance!

So skip the whole maddening and asking processing process and just go straight for the “playing with others” option, because after all, more heads are better than one, especially when one of those heads house a brain of puzzling genius. But hey, if you are a gamer with a cunning mind and you feel the 120 levels didn’t offer you the challenge you hoped they would, well upon completing them all, you’re more than welcome to head on over to the Vault for some 2 player and 4 player experiments. It is the home after all to additional levels of intense puzzling complexity, which includes 7 levels exclusive only to the Nintendo Switch version of the game.

But what good is being able solving puzzles if you don’t even know how to play in the first part and sadly that is something you have to figure out for yourself and I mean that literally! Nowhere in the game is there a tutorial or a screen to access the controls, so instead you have to fire up the game and figure out the controls for yourself for your chosen controller. But for the sake of this review, the majority of my Death Squared play-through saw me playing with the Pro Controller, so here’s me telling you the controls for the dual Joy-Con controllers/Joy-Con Grip/Pro Controller, whilst talking about the story.

So when playing Story Mode, which is named as such due to featuring a story in the form of voice acted Dave and Iris the AI, who work for Omni and are  testing a program that sees cubes solving puzzles, only two cubes are controlled (Red and Blue.) However when doing Party mode, there are four cubes to control (Red, Yellow, Blue and Green) and controlling them is not easy. Sure you can’t move all of them at once when playing, but you can move two of them as the left analog stick is used to move the Red cube and the right analog is used to move the Blue cube, but if you press and hold the ZL button and move the left analog stick, then it is the Yellow cube who would move and a similar thing (holding ZR and moving the right analog stick), will move the Green cube. Now it all sounds easy in theory, but differentiating is anything but. You could be right at the end of one particular puzzle and just need to shunt the final cube to the final colour-coded goal, except when you go to move Green, you forget to hold ZR down and you move blue instead, who then falls off the ledge and explodes, or walks into a trap and you have to do the whole puzzle again!

Personally speaking I am not a fan of the controls, with so many buttons serving only as minor movements, they are incredibly underutilised, as each D-pad button could have been assigned a certain coloured cube, so when you press the Up or X button for example, you gain control of the Red Cube. And then to control the Blue cube, you press its designated button and so on. The inclusion of this feature would have sparred me plenty of deaths because with Death Squared, all the deaths are counted and your progress on each level is also registered, so if you feel like beating your completion time during a later playthrough, you can!

Or you know, just play with three friends so you only have one cube to control, as that too would save you some of your sanity and save a lot of deaths from being added to your grand tally. Of course it could back fire on you if you and your friends delight in mischief and can’t help but prank each other by activating traps or plummeting cube head first over the nearest edge, but then that’s all part of the game’s charm! Just like cubes being able to pass through and fall through holocubes of the same colour as them, as well as acting as shields against lasers of the same colour and riding on top of each other as part of a Totem Pole is also part of the game’s charm. But yes without a doubt, Death Squared is yet another welcome addition to the Nintendo Switch’ ever growing line-up of available games and just like that, it is of course conclusion time!

Is Death Squared going to change the world? Certainly not, as it will drive players up the wall in both the good way and the not-so good way, but it is a hoot when playing with friends and easily scores a 7/10. So if you are a lover of puzzle games, than Death Squared is most definitely a game you should check out and if not, there are plenty of other games available on the Switch eShop, including the soon to release Splatoon 2!