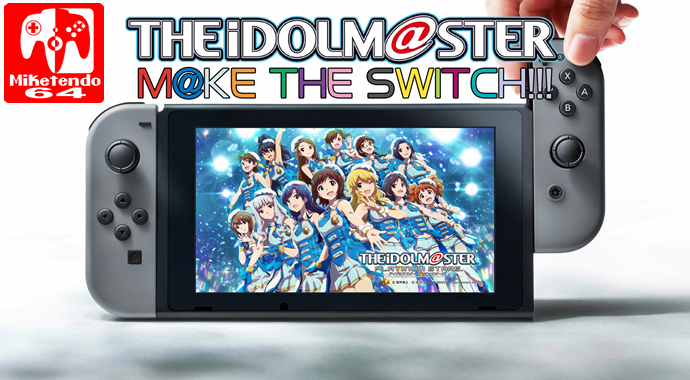 *The following is an article submitted to us and penned by Patrick Adams:

On March 3rd 2017, the Nintendo Switch was released to the world. But as I am writing this article here on Miketendo64, I am here to inform you of a campaign I started on March 12th, 2017. A campaign to help support BANDAI NAMCO Entertainment’s THE iDOLM@STER franchise, which is very big in Japan. The campaign is called “M@KE THE SWITCH!!” Now why did I start this? Well, I’m going to give you a bit of a backstory.

But first, for those of you unaware what THE iDOLM@STER is, here’s a history lesson!

THE iDOLM@STER all started out as a touchscreen arcade game on July 26th 2005. Did you know it was originally called “Idol Game” when the game was first unveiled as a prototype in 2002 during the 40th Amusement Game Show? The characters were illustrated by Toshiyuki Kubooka. As a producer at 765 Production, your job was to train 10 pop girls on their way to stardom. The idols include: Haruka Amami (CV: Eriko Nakamura), Chihaya Kisaragi (CV: Asami Imai), Yukiho Hagiwara (CV: Yurina Hase, but was replaced by Asakura Azumi from iM@S 2 onward), Yayoi Takatsuki (CV: Mayako Nigo), Ritsuko Akizuki (CV: Naomi Wakabayashi), Azusa Miura (CV: Chiaki Takahashi), Iori Minase (CV: Rie Kugimiya), Makoto Kikuchi (CV: Hiromi Hirata), and the two troublesome Futami twins, Ami and Mami (CV: Asami Shimoda). The original arcade version was directed by Junichiro Koyama. But when THE iDOLM@STER came to the Xbox 360 in Japan on January 25th 2007, which also introduced Miki Hoshii (CV: Akiko Hagesawa) (Takane Shijou (CV: Yumi Hara) and Hibiki Ganaha (CV: Nanami Numakura) would later debut in iM@S SP), Youzou Sakagami came in and directed. And he’s still the director of iM@S to this very day. Due to THE iDOLM@STER’s success, over the years, it spawn home console and handheld games, CDs, anime and manga, radio shows, three spinoff series named CINDERELLA GIRLS (2011), MILLION LIVE! (2013), and SideM (2014), and even live concerts featuring the actual seiyuus of the idols themselves.

Here’s a video of the 765PRO ALLSTARS performing their song, “HAPPY!!” together in the latest mainstream game, THE iDOLM@STER Platinum Stars:

OK, history lesson over. Now let’s get down to business.

When I first saw the Nintendo Switch on October 20th 2016, I was surprised to see that you had the ability to take out the console from the dock, and take it with you wherever you went. Plus, BANDAI NAMCO is a full third-party supporter. Another thing I learned about the Switch, on January 12th 2017, the Switch was region-free. When I heard about that, I had a vision. What if you had the ability to produce your idols anytime, anywhere?

And just like that, nine days after the Nintendo Switch launched, my campaign was born.

It’s time that after many successful years of the series being on PlayStation, in light of Nintendo Switch sales selling like wild in Japan, even managing to topple the PS4, our idols deserve better. In order for THE iDOLM@STER to play catch-up, especially if they want a bigger Western fanbase, the time has come for a change of pace, or should I say, it’s time for a switch. (See what I did there?)

Now, if BANDAI NAMCO were to bring the franchise to the Switch, the best place to start is a Nintendo Switch version of THE iDOLM@STER Platinum Stars, with all the DLC available from the start, with additional content not included in the original PS4 version which released on July 28th 2016. Like amiibo support for example, with a new set of figures of all 13 of your favorite 765PRO idols. Which 765PRO amiibo would you like to own? Iori for me! Heck, maybe Nintendo costumes would be perfect! Imagine Haruka performing in a Mario costume.

If THE iDOLM@STER: Platinum Stars were to seek a Western release, being ported to the Nintendo Switch, all voices, that includes the performances of the songs, must be left untouched, with just English subtitles added. Trust me, we don’t want a cheesy English dub cast to ruin the voices of our best idols, even though there are great English voice actresses out there who can actually sing, such as Christine M. Cabanos, Cristina Vee, Caitlin Glass, iDOLM@STER fan Natalie Hoover, and Erica Lindbeck, and we especially don’t want English versions of all of our favorite songs, just so they can be ruined, such as GO MY WAY!!, Aoi Tori, First Stage, and READY!!, because that would be an insane nightmare to long-time iDOLM@STER fans, including those who live in the West. To top it off, THE iDOLM@STER: Platinum Stars, due to that it does not have that much big of a fanbase yet in North America, would be released as a digital-only release on the Nintendo eShop. The best price so newcomers and veterans to the series can begin producing idols and seeing them onstage anytime, anywhere is a range between $14.99 – $24.99.

Fun Fact: Did you know that Asami Imai, the voice of Chihaya Kisaragi, loves playing video games (Yes that means Nintendo too?) It is explained in episodes of her web video show, “Singer Song Gamer.” Maybe she would love to produce her own idol character anytime, anywhere, thanks to the many possibilities of the Nintendo Switch. She’s also the Japanese voice of Ringo in SEGA’s Puyo Puyo series.

With the Nintendo Spotlight on the way on June 13th especially with six seiyuus from THE iDOLM@STER CINDERELLA GIRLS heading to Anime Expo to perform for the American fanbase on June 30th during Anisong World Matsuri at Microsoft Theater, now is the best time to help support THE iDOLM@STER for its big Nintendo Switch debut, not only in Japan, but also in North America. To help with the campaign, here’s what you can do: You can help be part of the movement on Twitter at these special hashtags:

The road might not be easy, everybody. But if we all work together as one, I’m confident we will win the day. I can’t do this alone however… I’m going to need your help.

If you know what THE iDOLM@STER is, and would love to see the series make its Nintendo Switch debut, you can join the movement. So, what are we waiting for, producers? Let’s go out there and M@KE THE SWITCH TOGETHER!!

*Patrick, thank you for your submission and we wish you the best of luck with your campaign.