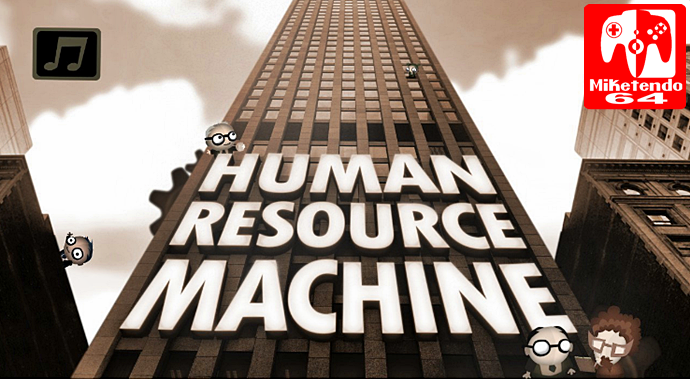 Joining the likes of Little Inferno and World of Goo on the Nintendo Switch eShop is of course the self-described “puzzle game for nerds,” Human Resource Machine, by Tomorrow Corporation. Only unlike the other two titles that released back in 2008 and 2012, Human Resource Machine is Tomorrow Corporation’s most recent offering to the world, having released not too long ago back in 2015.

Besides being more recent, something else that separates it from the other two titles, is the fact that unlike the Switch versions of Little Inferno and World of Goo, is the fact that Human Resource Machine is not a multiplayer title (Little Inferno does not actually have it implemented right this second, but an update that will introduce the two player function is on its way this month.) Other than that, it is still very much so a regular Tomorrow Corporation  with the usual graphics we’ve come to enjoy that uses touch screen controls and has Joy-Con support. However because it features touch controls, this does of course mean that Human Resource Machine is not playable in TV mode, but it doesn’t mean it is not an enjoyable game.

So with that in mind, let’s talk about exactly what kind of a game it is and in my opinion, it is marmite, because you will either love it, or hate it. But because that’s a statement and not a proper explanation, here’s the explanation. Human Resource Machine is a visual programming-based puzzle game that sees a corporate worker who most solve puzzles that will either make the player feel stupid when they fail to solve the, or like a genius when they do. Only the solution to the puzzles are not as clear-cut as they could have been, especially in the much later on levels. (39 levels in all and each level counts as another year the protagonist has been with the company.)

But to solve each puzzle, the player must compose a list of instructions from basic commands to control the movements of the protagonist on an overhead view of an office. An office that features two conveyor belts, (one marked as inbox and the other as outbox) and typically tends to include a number of marked number spaces that can hold one box each. For each puzzle, the player is given a specific assignment (but sometimes it isn’t specific enough) and just in case that isn’t enough, or the slightest bit confusing, machines are invading the city and guess what, they’re gunning for the jobs of those who work in your office building. So if you’re not machine minded enough to get the job done, actual machines will! (It could be worse. It could be Zombie aliens instead of machines.) And just in case you can solve the puzzles easily enough, there’s additional challenges too, such as solving the puzzles in fewer commands (lucky us!)

So while it may not be the very best of the three available Tomorrow Corporation games and by no means a relatively easy game as it will offer a challenge to most who play it, but for the select few who do like this sort of thing, it is a game you should strongly consider getting for your Switch since it is affordable and something that can keep you entertained for a couple of hours a days, whilst challenging your brain. So for those reasons alone, we score it a 6/10. But if you feel like giving this one a miss than that is perfectly understandable, as the Switch does have some great indie games available for the same price as this one.