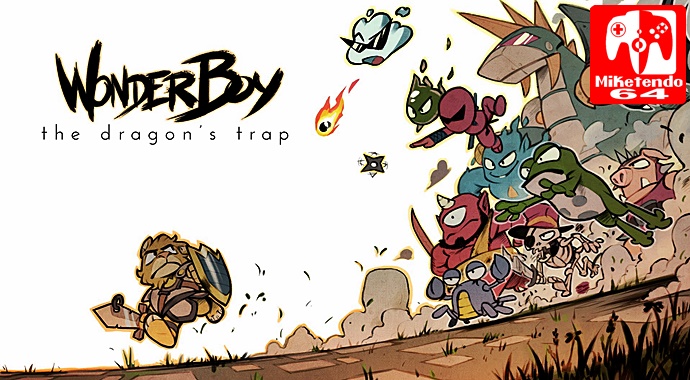 For quite some time it has been known Wonder Boy: The Dragon’s Trap is coming to Switch, but what wasn’t known was its release date, until now.

Straight from the typed words of DotEmu, the France based publisher has announced that the long awaited Wonder Boy is to release on multiple platforms on the 18th of April next month, with a PC launch for Steam planned a little later on this Spring. Below you will find some of what is shown in the new press release:

WONDER BOY: THE DRAGON’S TRAP SIDESCROLLS ONTO PS4, XBOX ONE AND NINTENDO SWITCH ON APRIL 18:

Also Announced for PC, The Game Will Launch on Steam Later This Spring

Paris, France – March 8, 2017 – DotEmu, developer and publisher specializing in modern releases of beloved retro games, and Lizardcube, are thrilled to announce that Wonder Boy: The Dragon’s Trap will be available on April 18th for the PS4, Xbox One and Nintendo Switch (and a few weeks after on PC).

Boasting beautiful, hand-drawn animations and a re-orchestrated soundtrack, the cult classic returns with a unique blend of exploration, action, and adventure. Play as Lizard-Man, Mouse-Man, Piranha-Man, Lion-Man, and Hawk-Man, and use their unique abilities to uncover the land’s deepest secrets. Switch in real-time between the original retro graphics and the visually stunning modern remake, and input your old Sega Master System passcode to unlock all of your old saves and progression – just how you left them in 1989.

But this will not be the last we hear from DotEmu from now and release as the company has also announced that a further announcement will come on the 22nd of March and will be something of a “Surprise.” As soon as it is unveiled or an additional release is sent out, we’ll be back to share it just like we shared this one.