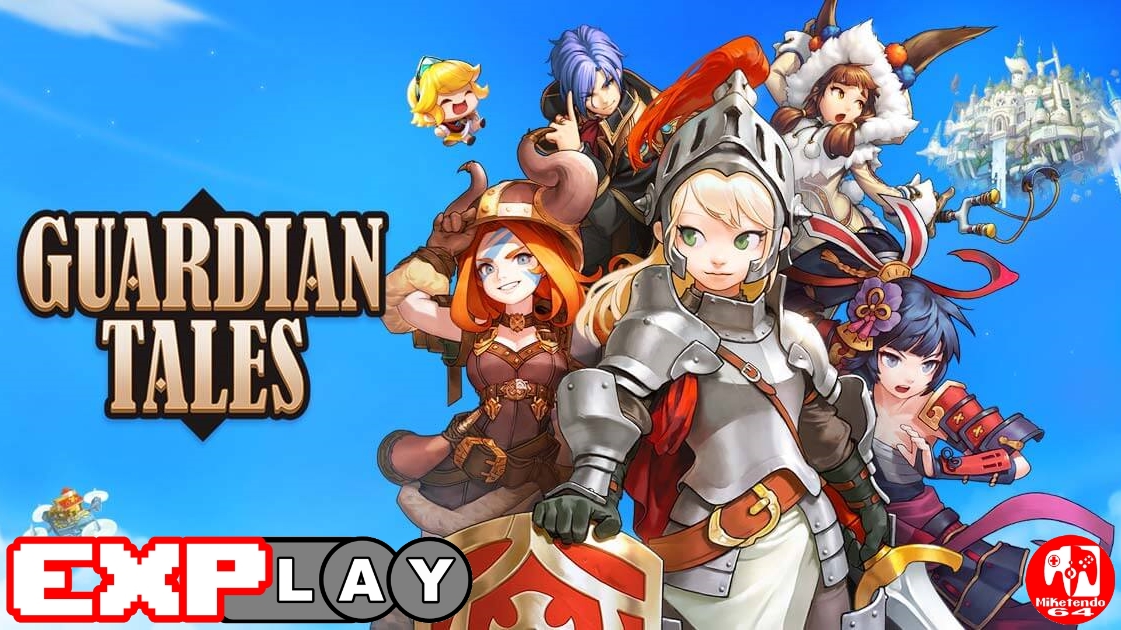 Welcome to EXPlay, (Explain & Play) the review series where we care not for scores but tell it how it is when it comes to every game we get our hands on, whilst also taking the time to include some lengthy gameplay, to give you the reader, the chance to shape your own impressions and views whilst watching and reading. In this installment, we’re covering Guardian Tales by developer Kong Studios.

If you’re a lover of RPGs and not afraid of gacha-focused mobile offerings, there’s a good chance you might be familiar with a little game called Guardian Tales. Developed by Kong Studios and initially released back in 2020 for mobile devices, a console port for Nintendo Switch was first announced in May 2021. Kong Studios had hoped to release the game later on in 2021 but, regrettably, the game was quietly pushed back, never to make its Nintendo Switch debut until October 2022. For a port that’s been a long time coming, the wait is finally over, but has it been worth it? To answer bluntly, yes.

The story of Guardian Tales begins in the Kanterbury Kingdom. Players take control of a nameless knight, to whom they are free to give a name and choose their gender. Once done, your knight is one of the latest recruits for the Guardians, but don’t go expecting to have much time to soak up the storied history because the Invaders have arrived and Kanterbury is about to fall.

This is the scenario players can expect to play through during the game’s opening prologue. Nevertheless, since this is the prologue, things have to get a lot worse before they can get a lot better. Your knight will try and fail to save the day and the world will never be the same again. With a prophesied evil free upon the lands, a perilous quest has unfolded before you and the real fun can begin.

With regards to gameplay, for those that did play Guardian Tales on other platforms, you’ll be pleased to know almost everything is the same, as touch-screen controls have been removed completely and replaced with controller support. Feels a little weird to not have it present, as it would still have been handy to have but it is immensely gratifying to be able to use a real joystick for character movement. For those unfamiliar with the gameplay of Guardian Tales, Guardian Tales is a turn-based RPG that plays out in real-time with a top-down viewpoint.

In the early stages of the game, you are limited only to your knight as your playable hero character, but when more become available, you are free to play as whoever you wish from the game’s huge selection, provided you have summoned them or acquired them already via other means. Of course, the further you progress, the more party members you can take into battle with you and use a combination of regular attacks, skills and chain combos to do real damage to your foes.

Still, just because Guardian Tales is an RPG, you will be mistaken to think that it is only an RPG. There are plenty of puzzle elements at play with many levels requiring it extensively to progress. There is also a very rich customisation system available in-game in the form of levelling characters and weapons up, awakening skills, evolving your heroes and enhancing their weapons.

There’s also a huge amount of content to play through with side quests available, the main story and game broken up into chapters comprised of main stages and sub-stages, lots of collectables but also fun little modes made up of other stages. From Rift stages where players can acquire a broad spectrum of items, gold and EXP, to a Tower mode and an Arena mode where you can play other players online, there is plenty to experience.

The only thing that will slow down your progress, more so later on than in the beginning, is the game’s stamina-based system. However, when playing through the main game, once a stage has been unlocked, you are free to replay it as many times as you want without having to use any more stamina. Then again, with so many achievements available, including the daily kind which rewards stamina and daily sign-in bonuses, there are plenty of ways to get more coffee-based stamina than just having to wait for enough time to pass to have it recover.

Additionally, once players have completed the game’s first chapter/world, you’ll gain access to Heavenhold, a special location where players can construct buildings and establish a kingdom of their own making and upgrade each building for better benefits. Players are also free to join a Guild or join one, to unlock another game mode where they can embark on Raids for useful items.

Now, despite being a game that does support in-game purchases should you wish to go to town on Guardian Tales’ gacha summoning system, be it for new heroes or new weapons, at no point does the game ever force it upon you. At the current moment, free daily summons are being gifted to players but if you do not feel the need to accumulate additional heroes and weapons faster, there is no need to do so. Just by playing through Guardian Tales, the game will help you build a formidable team, but the helping hand is there for those who do wish to take it.

There is a reason why those who play and enjoy Guardian Tales, refer to it as an engaging title with charming graphics and a solid plot. It’s an absolute delight of a game that is full of charm and wonder. Both the A Link to the Past and Link’s Awakening vibes are strong with it and it comes packed with plenty of Easter eggs referencing classic lines of dialogue, films, games and a whole Super Saiyan-like transformation that feels like something completely out of Dragon Ball.

Guardian Tales is a gacha game done perfectly right and it feels so good to be able to play the game with an actual controller. I always hoped Dragalia Lost might have made it over to the Nintendo Switch and have been sorely disappointed that it didn’t. Guardian Tales is clear proof of the fact that a Dragalia Lost port would have worked wonders but, you win some and you lose some. At the very least, we finally have Guardian Tales on Nintendo Switch. It plays and looks amazing and players can download it for free. So, what are you waiting for? If you haven’t downloaded it yet, you positively should.