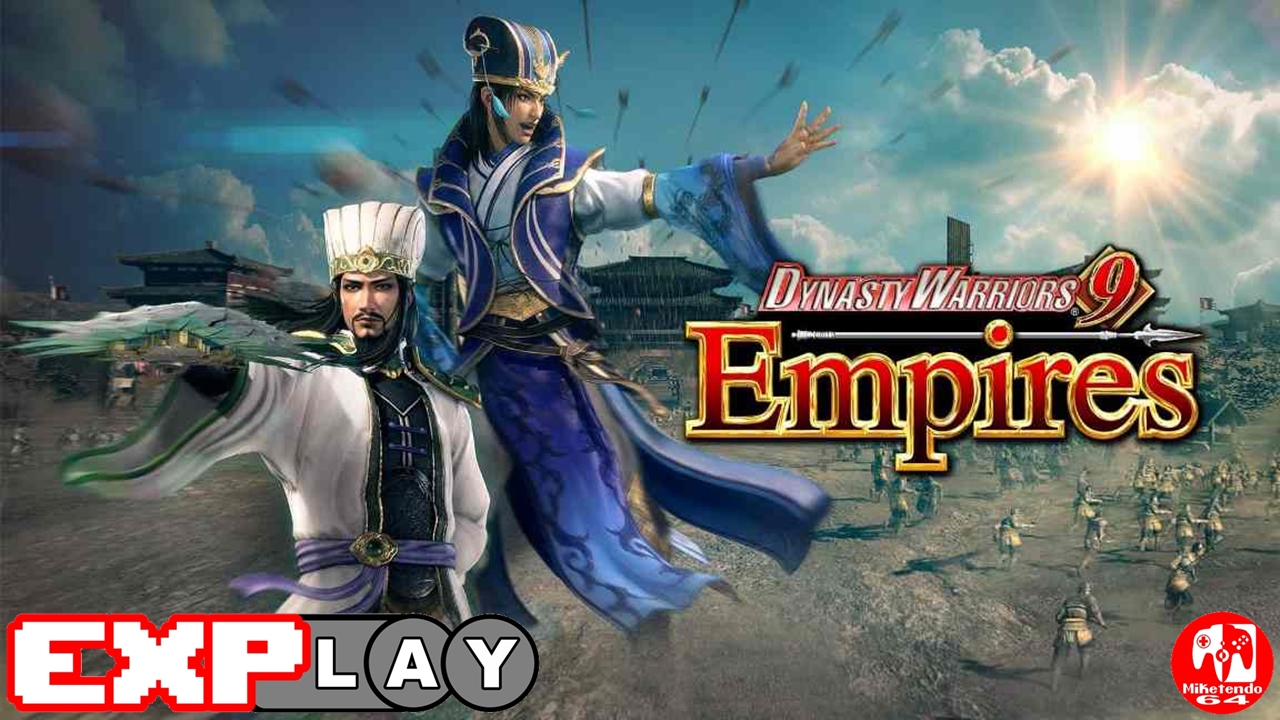 Welcome to EXPlay, (Explain & Play) the review series where we care not for scores but tell it how it is when it comes to every game we get our hands on, whilst also taking the time to include some lengthy gameplay, to give you the reader, the chance to shape your own impressions and views whilst watching and reading. In this installment, we’re covering Dynasty Warriors 9 Empires by developer Omega Force.

The Dynasty Warriors franchise has been running for quite some time. It first released on the Sony PlayStation in Japan in 1997 but it was far from being the Musou “1 vs. 1,000” that we typically know today. In fact, it was a 1 vs 1 fighter game more akin to Virtua Fighter according to Wikipedia. The series genre changed with Dynasty Warriors 2, which is Japan recognizes as the first true entry in the Musou series. For the rest of the world, however, every Dynasty Warriors title is numbered one higher than its Japanese counterpart due to counting the very first game as part of the series.

The Dynasty Warriors series is actually a spin-off of one of Koei Tecmo’s other titles, Romance of the Three Kingdoms, which is actually a video game adaptation and retelling of a 14th century historical novel of the same name. The novel was written by Luo Guangzhong and was a part historical/fictional account of feudal China and the three kingdoms who had designs to unify the country under their own banner.

As for Dynasty Warriors 9 Empires, it is labelled as a “Strategy-Focused” expansion for the open world hack & slash Dynasty Warriors 9 (whilst still being a standalone game). DW9E is still a hack and slash game but it drops the open world of the base game for a more strategic approach. The main game mode is conquest mode in which you can choose to be a ruler or an officer and are tasked with procuring and maintaining supplies, as well as occasionally embarking on the invasion of a neighboring nation. It is less focused on full-on battle from one mission to the next and more about making sure your army is well provisioned so when the time comes, you can better guarantee a sure victory.

Essentially, the gameplay is threefold. You start off with a War Council to decide on your nation’s objectives for the next six months. The months are basically turns and each action that you choose takes a month (or turn) to accomplish them. When not in a physical conflict, you are tasked with planning and procuring supplies to support and fund your army. This can be from increasing gold and rations to replenishing your ranks and that of your fellow officers. You can also take a stroll in the city to talk with fellow officers to build up your affinity with them. Just outside the town, you can find unaffiliated officers who you may be able to persuade to join you on your conquest. The third part is of course the actual combat itself that can be from defending your own territory or invading someone else’s.

Combat is very much like that of other Dynasty Warriors games where you must fight through hordes of enemies whilst completing set objectives. You have weak attacks and strong attacks, as well as special attacks to really do damage. For the most part, you will play on foot but if you need to travel long distances between keeps in a short amount of time, you can call upon a horse that you can mount and ride to where you need to go. You can also fight on horseback too.

The main objective of Dynasty Warriors 9 Empires is to capture siege weapons so you can use them to besiege the defending nation’s castle. You can enact a secret plan that can give you an advantage in battle and oftentimes, you will be tasked with thwarting the enemy’s own secret plan. Once you are in a position where you can make it inside the castle by means of ramming in the doors or by capturing the lookout towers and using the grappling hook to scale the walls, you will then have to find the target enemy officer or ruler and defeat them.

The gameplay is rather straightforward but the real challenge comes from what difficulty level you set yourself when starting your conquest. By choosing a higher difficulty, you will make enemies that are much tougher to beat and in turn, they can defeat you much easier too. Another challenging aspect may be the large choice of officers that you can choose from. The game has 96 official officers and boasts 900 generic ones to choose from. You can even create your very own officer to play as in Edit Mode. You can use a whole array of customization options to make them look however you want them to look and there are plenty of templates you can use too.

Dynasty Warriors 9 Empires has quite a fair bit going for it and I give it credit for the use of new mechanics and features whilst still keeping the tried and true Musou formula. I respect Omega Force and Koei Tecmo for releasing this game on Nintendo Switch and I am sure a lot of Dynasty Warriors fans will be very appreciative too. I do have to say though that it just doesn’t quite stick the landing on Switch for a number of reasons.

Most importantly, Dynasty Warriors 9 Empires does not look fantastic on Switch. The game is playable and most of the time you will completely glaze over the drops in framerate and resolution if you are not paying too much attention but it does become more and more noticeable over prolonged play. To say that the Switch can’t handle it is all too easy to say and is just an excuse. After all, Hyrule Warriors Definitive Edition and Hyrule Warriors: Age of Calamity ran fine, and even Warriors Orochi 4 Ultimate is acceptable on Switch as well. I feel that some more optimization and a finer polish is required on Dynasty Warriors 9 Empires up so it can be the best it can be on Switch.

Another issue that I have with the game is not so much the game or gameplay itself but rather the vast amount of characters there are. There are just so many that it is an absolute challenge to try and remember their names (let alone pronounce them). The beauty of the other spin-off games like the aforementioned Hyrule Warriors or even the likes of Persona 5 Strikers or One Piece Warriors is that you are most likely already familiar with the characters and are more invested in them. To come into Dynasty Warriors 9 Empires with no prior knowledge of the series or the historical figures that the characters are based on, requires a level of pure interest and a strong desire to conquer and unify China.

Dynasty Warriors 9 Empires is actually pretty fun once you get into the swing of things and the turn-based strategic elements when not in combat really do add more depth to the game. The issues with the framerate and resolution on Switch do make it tough to recommend playing on the system but if you are fan of the series and own another platform, then you will be able to enjoy the game far better on a more potent system. If the Switch is your only gaming system and you are not too fussed with slight performance drops, then you can still have quite a lot of fun with Dynasty Warriors 9 Empires on Switch.