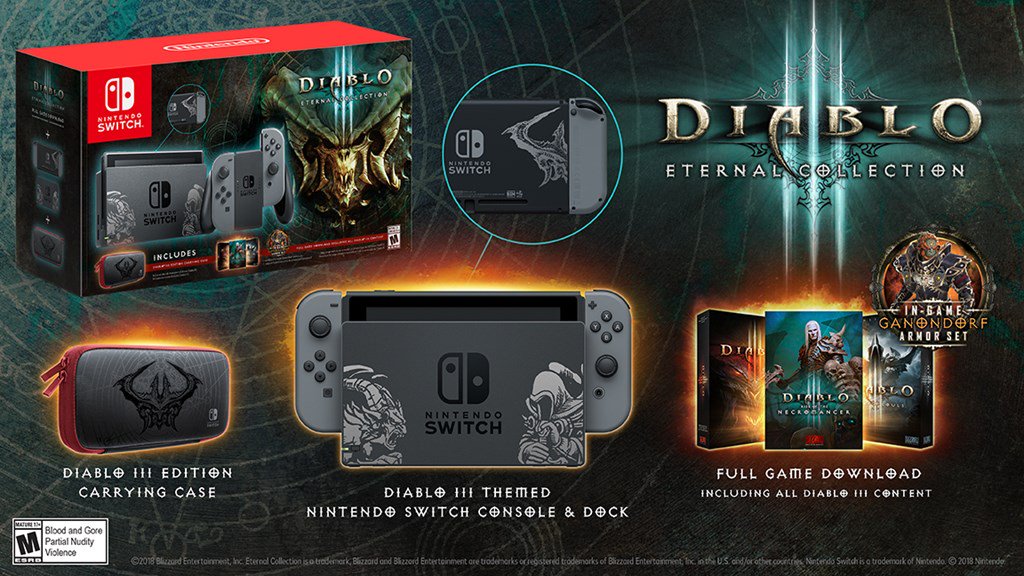 If you are desperate to be a special edition Switch this year and are unsure if you’re willing to throw money at the special Pikachu & Eevee Pokémon: Let’s Go Switch, or the Super Smash Bros. Ultimate bundle, perhaps you should consider a Diablo III one!

Launching on the same day as the game, the super duper bundle from hell, will be a GameStop exclusive in the US and comes with both a Switch and dock that feature artwork of a Diablo III nature. A code for the digital version of the game is also available, along with a carry case. The full details can be seen here:

The devil is literally in the details of a new Nintendo Switch bundle featuring Blizzard’s legendary game Diablo III: Eternal Collection, launching exclusively at GameStop on Nov. 2. Fans who pick up the devilish bundle will receive a Nintendo Switch system and dock featuring Diablo III artwork, a download code for the Diablo III: Eternal Collection game and a themed carrying case, all at a suggested retail price of $359.99.

Diablo III: Eternal Collection contains the full classic game, as well as all of its expansion content: Rise of the Necromancer and Reaper of Souls. In addition, fans who play the Nintendo Switch version will receive in-game items that are only available on Nintendo’s hit console. These in-game bonuses include a variety of items from The Legend of Zelda series, including Ganondorf Transmog Armor, a companion Cucco pet and a Golden Triforce Portrait Frame.

In Diablo III: Eternal Collection, players choose between one of seven classes, including Barbarian, Crusader, Demon Hunter, Monk, Necromancer, Witch Doctor and Wizard, to set off on a dark and memorable adventure to destroy demons and discover loot. The critically acclaimed game is hailed for its style and gameplay, which is perfect for playing on the TV or on the go using Nintendo Switch.