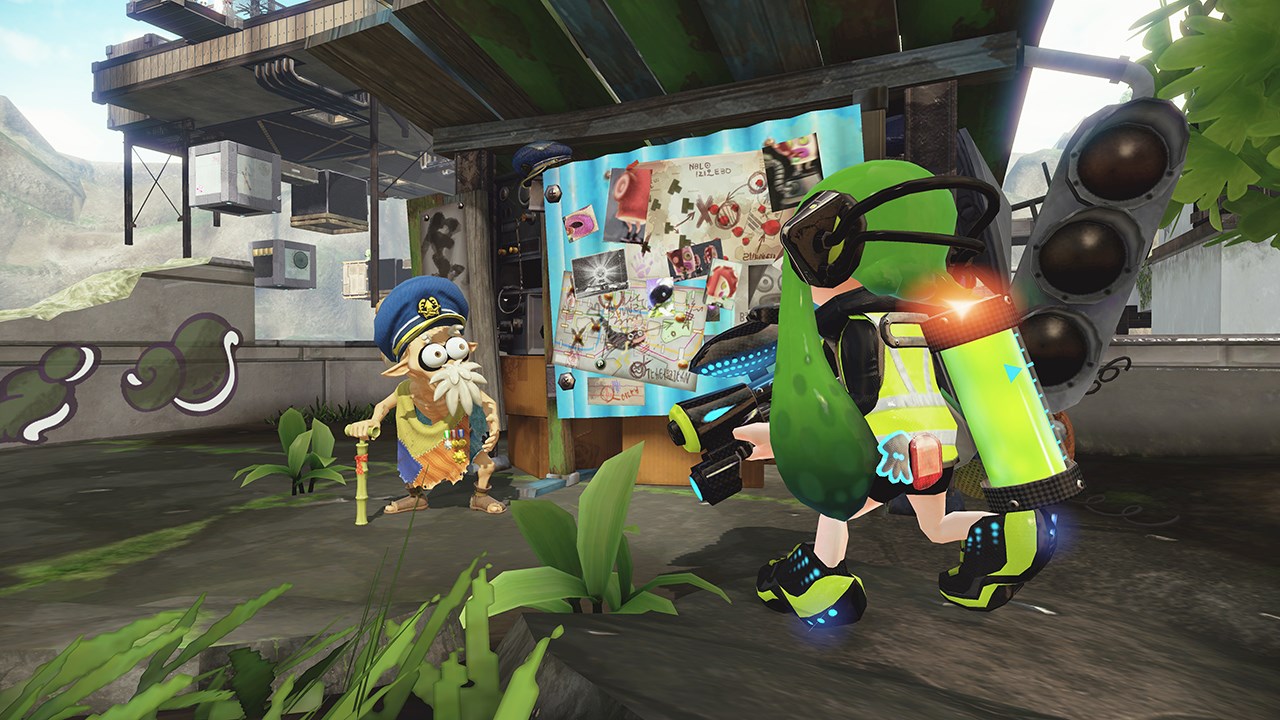 With my fill of Battle Dojo peaked, it was time to step away from Battle Dojo, as the undefeated victor, and take to painting the town red, or whatever colour ink your assigned, when engaging in Turf Battles against other players online, but no lobby, your Turf war games have no hold on me as of yet. I wish to leave behind Inkopolis and follow that mysterious stranger Cap’n Cuttlefish, heading off into the unknown Octo Valley. So Let’s do it.

In his company for all of five minutes and already he’s volunteered me to aid in his mission of getting the Great Zapfish back (a very large electrical Catfish, which powers only all of Inkopolis and has been stolen by those damned Octarians—(Damn you Octarians!) Not only that, but good ol’ Cap’n Cuttlefish decides my clothes are no good and gives me the hero uniform, previously handed to Agents 1 and 2. With the new garb also comes the title of Agent 3 as apparently enlisting into the Inkling armed forces is a rather easy affair, as the Captain assigned me a role in the Squidbeak Splatoon, his old regiment. (A dream come true, I always wanted to enlist, thank you videogames.) But duty calls, the Great Zapfish awaits rescuing and there’s only 27 levels, 32 if you count the boss battles that stand between me and that goal.

So already in the first unlocked section, of 5 sections, only able to progress to next one, upon recovery of the required number of Zapfish (much smaller versions of the Great Zapfish), which in this case is 3. But in order to save them, you’ve got to find the doorways to the each level, finding the invisible openings, by dousing them in ink, so get shooting, and once you’ve found the first one, or all three, time to pick one and get underway.

The very first thing I noticed about the level layout and state of play, is just how much like Super Mario Galaxy is, further proved when super jumping halfway across the level, platform to platform. Only this wasn’t the only “Mario” connection I found. When in the Blackbelly Skatepark level, much later on, when having to evade the constant inkstrikes of those dastardly Octostrikers (my mortal nemesis as far as this game is concerned. The only baddie who presented me with challenge, which is saying something, when I found trying to reach him, a whole lot harder than actually battling the final boss, whose DJ skills, are just as sweet as those of Avicii and you KNOW, the proverbial **** has hit the fan, when the bass changes #spoilers), you will actually come across an area, where a sunken scroll resides, hidden in a crate, as they all are and on the wall, is a poster of a Blooper. So if you’re on this level and can’t find the scroll, Blooper will show you the way.

The other Mario tie in it has, is that gaming feeling, that Mario Galaxy brought, only not as hard, but the whole ink blasting system, filled me with Déjà vu as it had me reminiscing about Mario Sunshine, when Mario had that big ol’ water jet system on his back. Who knows maybe at some point, they’ll actually make it possible that the Mario amiibo, will unlock the Sunshine blaster, as an additional inking weapon?

But back to the levels, each one offers something new, new rules to abide by in order to reach the end, new baddies to fight or just a new location, but and this is a big but, as well as the Zapfish at the end of each and every level, there are also Sunken Scrolls to be found, which I realise I have mentioned a couple of times already, so I will be going more into those, but in the next paragraph, let’s get back to the level. Level play is pretty much moving and super jumping, platform to platform with killing a couple of baddies, here and there, more and more, passing checkpoints, until lastly coming face to face with the Zapfish at the end of the level.

Right, Sunken Scrolls, let’s get into it. The scrolls are a collectible on each level, secreted away. However although hidden, they are very easy to find, just climb those very tall pillars, drop down those wire grated areas, and on levels where new challenges are established, (invisible paths, spreaders and more), they are also a hint as to how you go about finding the Sunken Scrolls, which are always hidden inside a crate, except on normal boss levels. There you just have to beat the boss and you’ll see the scroll appear in front of the Zapfish, but when fighting DJ Octovicii (my name for him, but feel free to use it yourself), the scroll is in a crate. (Confused yet?) Now just what do this scrolls do, they make up pages to an old research book, with notes about the war, Octarians, fashion, the 12,000 year old remains of a Wii U gamer and more. Plus you know, getting them satisfies that typical 100% Game completion, complex a huge number of gamers have (me included!!)

Play-through levels such as the one I’ve previously covered, aren’t the only ones on the menu, for there are also a shoot-out styled level in each of the 5 sections, where you need to fight your way across the level, reaching the awaiting Zapfish, by battling Octolings, evolved Octarians that can possess a humanoid form. And of course there is the boss levels, where you have to make your way to the boss kettle, just so you can face the monstrosity that awaits, but in typical gaming fashion, the rule of three is all you need to take them. Oh and seeing as how I am giving tips, if stuck on the final boss level, remember, don’t talk to the hand, ink the hand, then rule of three that and just when you think it’s all over, there’s still more afterwards, but hey, beat him and we’re onto the credits baby!!!

And with all of that, we’re almost at that part of the review where I give Splatoon its game rating, but no decision can be taken so lightly, it’s time to bust out a list of – Pros & Cons:

-Something you can pick up and leave

-Easy to get on with, offering no real complications.

-Something everyone can play, regardless of age.

-Stimulating offers a great gaming experience, something you can enjoy playing over and over.

-Even though there are 32 levels and of course online play, the 32 levels, each one can be played and finished to completion, in five minutes each, including boss fights, which means as far as general story goes, it only really leaves you with around 160 minutes of game time to complete every level once first try, which means allowing for the likes of error, Story mode can be completed in a single 5-6 hour gaming session, which us gamers, we all know does happen quite a bit when the game is that gripping. Much like I was gripped in my first session with Hyrule Warriors (damn I love that game). Something you can pick up and leave

-Although as original as could be in this modern age, the story, undoubtedly Nintendo, it just didn’t feel as up to par as it could have been, but then again, although with a lot of games, story is everything, this isn’t one of them. My sister and I were both playing this, with her skimming through story and me reading and paying attention to everything, but there was no real difference. You don’t need to know the story, all you need to know is who to shoot at and which direction to go in and away you are.

-The challenges and boss fights lacked the whole, challenging aspect. Sure some Octarians got lucky and got me, along with a small number of splattered deaths, dealt by the hands of the Octolings, but that was pretty much it, but that could just be me, I like a game that really makes me have to think and solve the equation. Finding all of the Sunken Scrolls, was a whole lot easier than it could have been.

-Not enough colour and I don’t mean actual colour as far as the background is concerned, but ink shooting wise. In single player, a singular colour works best and an asset, but it would have been nice, to have the option of dual colour, to swap back and forth in Battle Dojo. Giving the game a little more colour, something that does happen, but right at the end of the game, during title credits, when players are confronted with a black screen that you have to ink (which changes colour by itself), in order to reveal the game credits, which scroll up from the bottom, along with character illustrations.

So with all that to consider, I can safely say, that out of 10 Ink squirts, I give Splatoon 8.6/10. It’s not the best game on the Wii U Console, but it is one of the most colourful, funniest and enjoyable games to lay your hands on. Easily worth adding it to your gaming shelf and playing it on one of those days where work, or life bites you that little bit harder. So if you are itching to get you tentacles wet then arm up soldier, You’ve got some Octarians to ink, Cap’n Cuttlefish awaits.

After all, this was just my opinion, its time you made your own.