Before Ghosts, I had never played a Call of Duty game, seen others play it, but never played it myself and now that I’ve finally gotten round to playing a game from this iconic series, why didn’t I start playing COD sooner? You’ve got guns, explosions and with Ghosts, you’ve got Riley, not Simon “Ghost” Riley, who is awesome, but Riley the German Shepard and this Riley is seriously amazeballs. Is there nothing this dog can’t do? (Besides carrying itself off to safety, after it got shot), which by the way, I seriously can’t believe, the Federation shot my dog.

Yeah they killed Daddy, but he’s a Ghost, quite literally now, he wasn’t an innocent dog that did nothing to deserve a through and through bullet wound. He didn’t rip out that many throats. 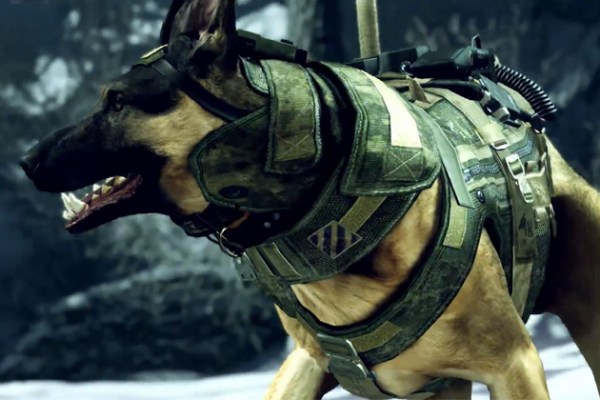 But seriously, this game does not fail to raise the bar, each of its 18 missions intensifying more so than its predecessor, with each level bringing a new mechanic to the level, and honestly it is really hard to pick a favourite, I rather enjoyed repelling down a building, shooting all enemy tangos who were visible inside. I also enjoyed scuba diving under the ice and setting off charges before gunning down all those who feel into my icy trap, although I really didn’t like getting attacked by the Tiger sharks, they could be right buggers when they wanted to be, just charging right at me, turning the sea a misty bloody red around my savaged body. After the third brutal murder, I couldn’t help but spend an entire clip into the first shark I saw, (chew on that!) Still that very first step into space was pretty special, everything going tits up and time to steal a gun and stat shooting, or start dying.

I doubt the Moonraker mission in 007 Legends was anywhere near as good as the space missions COD brought to the table. The amount of times I died on the second Space Mission, I just could not get past the second bit on veteran mode, and then I did at long last and what a joyous moment that was in the Longman household. Still as a diver, I’m just overwhelmed with love of the underwater gunfights, they were true fun and out of all the weapons available, my favourite isn’t the big guns, or even the hand guns, but the knife. Who doesn’t like tossing a throwing knife at an unsuspecting victim? Or stabbing an enemy soldier in the chest? Knives are awesome, blades may dull but they don’t run out of bullets and they are great for silent take-downs.

Then, when you get bored of campaign (like you could get bored of story?) Well maybe after the tenth time you play through all the missions, there’s always local and online multiplayer, which come chock full of modes to be enjoyed, my all-time fave being Infected, hands down. Set bots to 10, chose one of the many levels and get the match started. It’s always more fun when you get to start off as the zombie, just one of you against an entire team of Gun-toting Hardballers, all of them waiting to be infected. Shoot’em, stab’em, infect them and totally destroy them, all in the name of good fun gameplay and good fun it is. Anyone can run round mindlessly shooting at members on the opposite team, it takes true skill to take on Infected and be the last soldier standing, battling relentless against a horde of zombies as you wait for time to finish. Also adding the element of greatness to multiplayer, is the inclusion of Riley (because you can never get enough of Riley) as that loveable dog is also available to be exploited. Rack up the killstreak and you can unleash the beast, because if there is a sneaky badass aiming to come up behind you and you can’t get him, Riley sure as hell can. (I know, I’m seriously crushing on that dog, almost as obsessed with Riley as Rorke is infatuated with Logan, you can find out more when you play the game).

Time for a Call of Duty Pros & Cons, I doubt there will actually be many as far as the latter is concerned but its procedure:

-Plenty of customizable options for tweaking your chosen soldier and load-out.

-Multiplayer modes for gamers of different fields to engage (Infected and Kill Confirmed are awesome).

-Underwater battles, land battles, sky battles and space battles, forest battles and city battles, why we’re just fighting everywhere. I have never played a game where quite literally the entire world is the battle ground and I seriously have to start playing more games like this.

-Logan Walker is hard, he takes a bullet to the chest, watches his father get his brains blown out in front of him, only to then fight his way out of the Vegas safe-house and carry Riley to the chopper, after Rorke paid a friendly visit.

-The effects to the cut-scenes introducing the levels, were a stunning spectacle to see and truly set the pace for the mission to come.

-Lastly this game is just awesome, free to play online for Nintendo and I picked it up for a right bargain on Amazon.

-I know we’re in the middle of a battle, but a couple more side objectives would have been nice, I know this isn’t 007 Goldeneye from the Wii but it plays a lot like it and I always found having an extra couple of objectives to my mission, fun. Sure I have to go out my way, put myself at further risk, but it was all good fun. Getting all the Rorke files was fun, but I like collecting things, would have been nice if there were more collectibles available. At least I got to collect a lot of bullets though, so at least that’s something.

-You never get to hit Rorke once (What I would give to pistol whip him at least once. Yeah I may get to shoot him, but a fat lot of good that is.

-You never get to hit David “Hesh” Walker either. I have had it up to here (imagine me holding my hand way up past my head), with his constant barrage of orders. I will get Riley Logan, but when you and Keegan can’t be arsed to clear my path, I have no choice but to set down my only helpful team mate and kill everyone myself before clearing out (talk about lazy).

-Ghosts came a long way with multiplayer on this, would have been nice to have seen it extend to co-op story mode, after all, the likes of Keegan, Merrick and of course Hesh, charging into battle alongside you, it’s not like there isn’t another team member Player 2 could have played as.

There is no way I can delay it any longer, Call of Duty shoots high as it scores an accurate 9.1/10.0 shell casings and because Riley is so awesome, he gets to be rated too, 5.0/5.0 barks. Any dog that takes on a wolf when you’re under attack, charged tangos out of a building and arrives on a boat as part of a rescue operation, after the plane I was in, went down, is A-okay in my book. The term “good boy” is nowhere near enough praise this dog deserves and is alone, worth buying this game for, but for you non dog lovers, how about these reasons to play it: You can shoot Tiger sharks, throw knives, zip-line, repel down buildings and blow a whole load of stuff up.

But as always, this is just thoughts on the matter and its encouraged for you to make your own.