TriForce Heroes: The One Fan Theory that could Change it All

I’m going to be blatantly honest, when I first heard the news of the Legend of Zelda: TriForce Heroes I was gravely disappointed. Sure it looked like it could be a fun game, but it just felt like the wrong direction for Nintendo to take the beloved Zelda series and the more I learned about it, well the more I detested it.

How such a game could be included as a canon title confused me and yet no matter my growing hatred for it was, every time I saw it, I was reminded of something. The game was speaking to me but I just could not get the message, until now. Never in a million years did I think I’d purchase the game and yet it was the first title I purchased for my all new handheld console and since it arrived in my hands at 4pm of yesterday, I spent the next twelve hours trying to figure out just what the message was and I can honestly say, the mystery is no more, but before we get into that, let’s go through a little run-through.

Is it the best Zelda game in the world? No, no it’s not, but then again, it’s not the worse one either because there are no bad Zelda games, they are all too different to really be compared to one another and to do so is just folly.

Is it the best story in the entire Zelda franchise? Absolutely not.

Does it deserve to be canon?  Right now, at least two thirds of the Zelda fandom would cry out a deafening no, but we are not done with my run-through.

Does it tie into the established Zelda timeline? Yes it does, as it was announced by Nintnedo that the Link we see in the game, is the very same Link from A Link Between Worlds, just a few years older as the events of TriForce Heroes takes place a few years further down the line and just because Link in the new game does look different, due to the fact that the developers tried to use as much of the ALBW style but changed it where they could, it doesn’t mean he can’t be the same Link. For example in Wind Waker, when Link is in Hyrule Castle, there is a statue of the Legendary Hero of Time, who in the game is in Toon Link style,  a style that wasn’t implemented in a Zelda game because it wasn’t done yet. The statue of Link was nothing like Ocarina of Time Link, but it was the game’s own style representation of him. Further more, Hyrule is a large place, with many surrounding realms and Kingdoms, there’s no reason why they couldn’t have created an outpost that soon enough became Hytopia and let’s not forget, in Majora’s Mask Link’s adventure took place in Termina, so Link being able to travel to such a place is perfectly understandable, why wouldn’t he want to see what other places the world has to offer, he’s already seen Hyrule and Lorule.

TriForce Heroes is not just one game, it’s two because in my opinion this game is the love child of A Link Between Worlds, whose looks it inherited and Legend of Zelda: Battle Quest (that very awesome minigame from Nintendo Land). Battle Quest was all about co-operation, one player having one weapon which serves an important purpose, such as the bow and the other, or others, depending on how many of you were playing at the time, would be equipped with the sword. It was a game where you would light up switches, stand on switches and more as you navigated this fun and crazy world, fighting your way across various stages. Now are you telling me that doesn’t sound anything like the all new Zelda game? 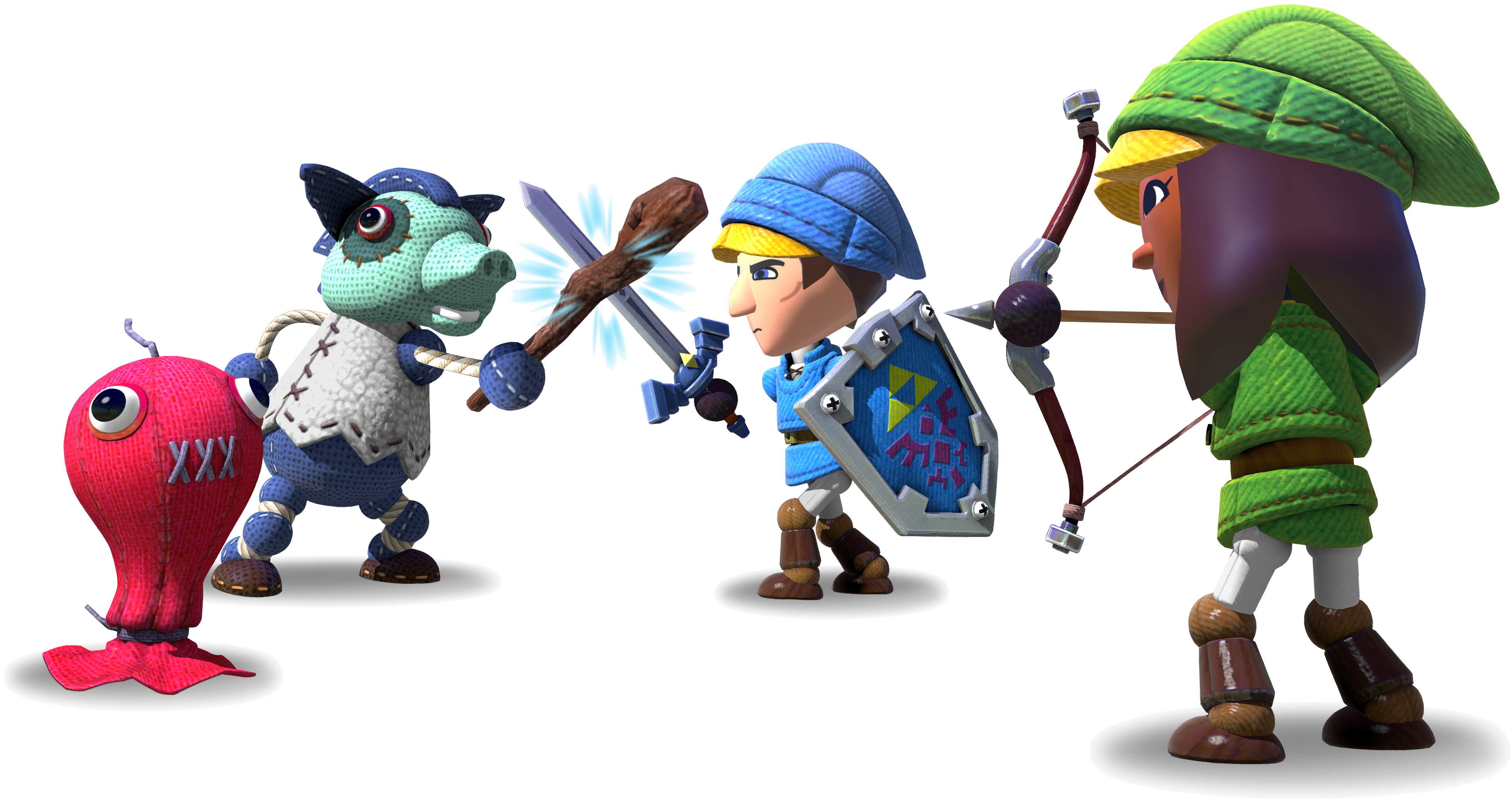 Sure Battle Quest featured Ganon, the Triforce, but it didn’t have Zelda and yes it isn’t classed as a canon game, but it was still given the full title of the Legend of Zelda Battle Quest and for me, having played it, I really wanted Nintendo to make a full game of Battle Quest but the sad truth is even if they did, it would never be on the Wii U, with the HD capabilities Nintendo’s latest console has, why would it want to make a cartoony game like that, but to do so on their handhelds is a complete other story because every Zelda title on there with the exception of remakes are toony, less serious and more fun and because of that its why Triforce Heroes works so well. Not every realm has to be facing total annihilation in every Zelda game, sometimes the crisis can be a lot light and in a Kingdom with no Ganondorf trying to make it his own, there can be humour, there can be jokes because the people aren’t as afraid and Link’s been doing this for nearly thirty years, why not let him have a break and have a taste of the simple life for once? He deserves it. Every Zelda game offers something new and brings in a fresh perspective wherever possible and with the large open world of Zelda U on the horizon, this is just the type of game that will make us love it even more.

Love it or hate it, Triforce Heroes is a real Zelda game and it deserves its place as being a canon game and for me as someone who hated it when he first saw it, I love it. It was exactly a Zelda game I wanted to see and play and I highly doubt I will be the only person whose views of this game, gets turned around. You can expect my review of this game very soon, but to tide you over till then, here is some reading of our previous discussions regarding Battle Quest.