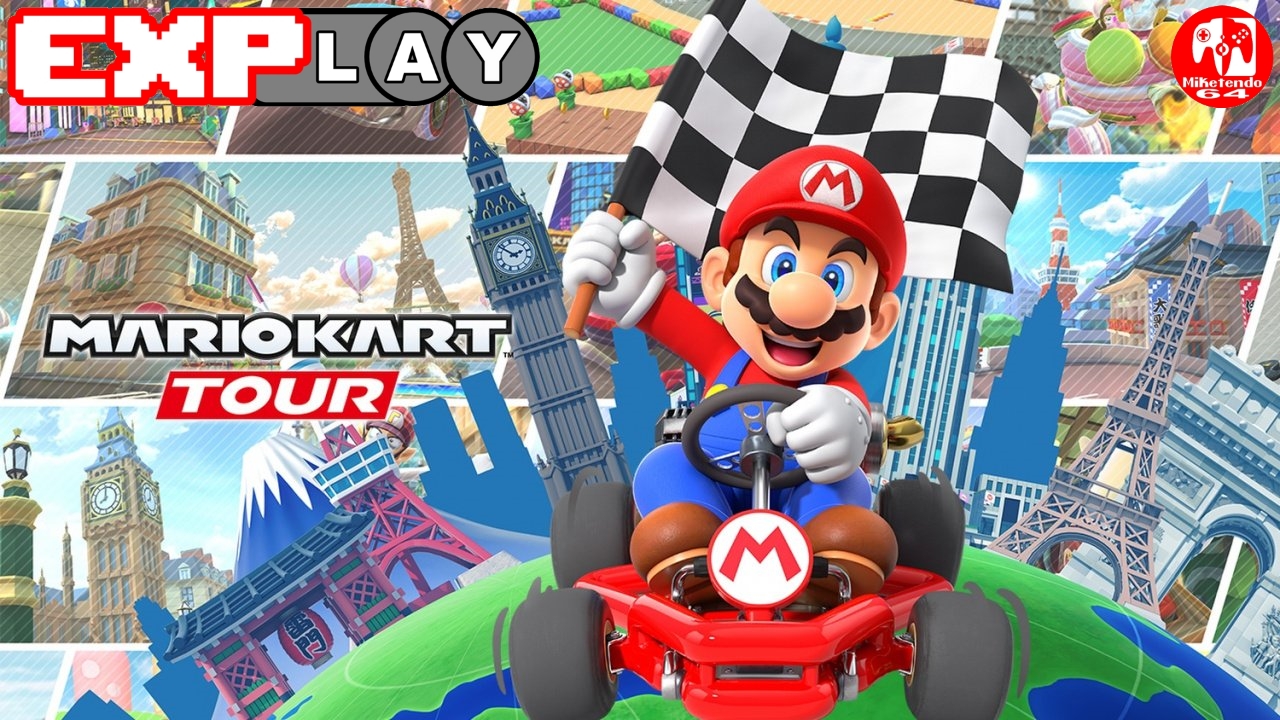 Welcome to EXPlay, (Explain & Play) the review series where we care not for scores but tell it how it is when it comes to every game we get our hands on, whilst also taking the time to include some lengthy gameplay, to give you the reader, the chance to shape your own impressions and views whilst watching and reading. In this instalment, we’re covering Mario Kart Tour from Nintendo EDP and DeNA.

What do you do if the sales numbers for a racing game that was first released in 2014 but ported to a new console in 2017, proved the port was an insane hit? Well, if you’re Nintendo, instead of announcing a sequel, you announce a spin-off game for mobile devices. In 2018, this was literally the case as high sales numbers for Mario Kart 8 Deluxe, lead the way for Mario Kart Tour, a new mobile game based on a Nintendo IP, to be announced in January 2018, but released in September 2019.

Fast forward two years and two months to the present, instead of going the same way of Miitomo and Dr. Mario Word, Mario Kart Tour is still the mobile racer you can play on the go, without needing a Nintendo handheld or console to play it, and yet, despite some new changes and tweaks, unlike Fire Emblem Heroes, Nintendo’s best-performing game for mobile devices, which has seen many new features, modes and more, added since its initial release, Mario Kart Tour is still very much so the game it has always been.

Instead of featuring cups and tournaments, you can play all the time, as seen in other games, Mario Kart Tour is comprised of Tours. Events lasting two weeks at a time, that can be based around a certain theme, specific characters, a city such as London and New York and are comprised of 12 cups, with each cup consisting of 3 races each and 1 bonus challenge, ranging from taking a screenshot that meets all requirements, avoiding obstacles, finishing a race in first place, or just gliding.

Another key change between the main series games and Mario Kart Tour, is how stars are earned. Instead of 3 stars being given if the player comes first in every race, in Tour, while finishing first helps with earning points, the amount of stars you earn per race (maximum of 5 available with 3 available on the bonus challenges), is determined on whether or not you earned enough points to earn them all.

As for how these points are earned, finishing in first place is a good way to go about it, but so is picking a kart and glider that offers the best combo and a character who can use 3 items on any given race track. It also helps to use select characters, karts and gliders with higher levels as together their combos will last longer and more points. (These things can be increased via point level and point boost tickets.)

By choosing the three things that will give you the best edge, you will increase your chances of getting a frenzy, an instance that occurs when you drive through an item box and the items you get, provided you have chosen a driver who can have three items, are exactly the same. During frenzy mode, players become invincible for a brief period of time and can use unlimited items that match the ones that you received from the item box. Another thing that helps keep your score count climbing is using items against other racers and performing jumps and drift boosts.

In terms of gameplay, whilst racing is at the forefront, with gacha being a close second, at its heart, Mario Kart Tour is very simple as you can easily complete entire cups with just a thumb being used to steer, drift and use your items thanks to directional and dragged thumb movements, but as an added bonus that wasn’t included original, the game now supports both portrait and landscape gameplay whilst racing and for the player who doesn’t want to use a thumb, auto is an option as well.

Then to help fill the game out, there is a level up system at play, which offers more rewards, bonuses and points the more you level up, but also a complete online mode where you can race against random strangers or good friends and believe it or not, the online side of things is actually handled pretty well and the matchmaking isn’t half bad.

Then of course, there are plenty of challenges on offer, hundreds of badges to collect, including a special one dedicated to each tour, provided you complete the daily race each day the tour lasts for and then, there is the games shop itself. With plenty of opportunities to coins, gems, and tokens, players can purchase all sorts from Mario Kart Tour’s shop, from new drivers, upgrade tickets, karts and gliders.

You can also use real-world money to purchase in-game currency and even splurge on the special pipes offering an assortment of highlighted goodies, which includes  spotlight drivers, karts and gliders if the highest rarity. Gacha mechanics aren’t for everything and it is very annoying just how many alts there are of beloved Mario characters, but there is plenty of representation of lesser-known characters and the variety of vehicles and gliders is not something to be sniffed out.

They only get better and better the longer Mario Kart Tour lasts and when you feel like picking a side, special team rally events where one character is pitted against the other is a thing and the Bowser vs. Donkey Kong event will always stick with me, as the team I choose, actually won and because Godzilla vs. Kong was nearing its cinematic release when the event kicked off.

Despite boasting one of the best rosters in a Mario Kart game, along with featuring plenty of good ideas worthy of carrying over into the main series of games, there is but one simple truth, it is not Mario Kart 9. It’s as good as as far as some are concerned, but it’s not the true home console experience fans have been waiting. It’s certainly a great introduction to the racing series and one that can go toe-to-toe with earlier instalments but even though this mobile instalment is pretty spectacular in its own right, the shadow cast by Mario Kart 8 Deluxe stretches far and wide.