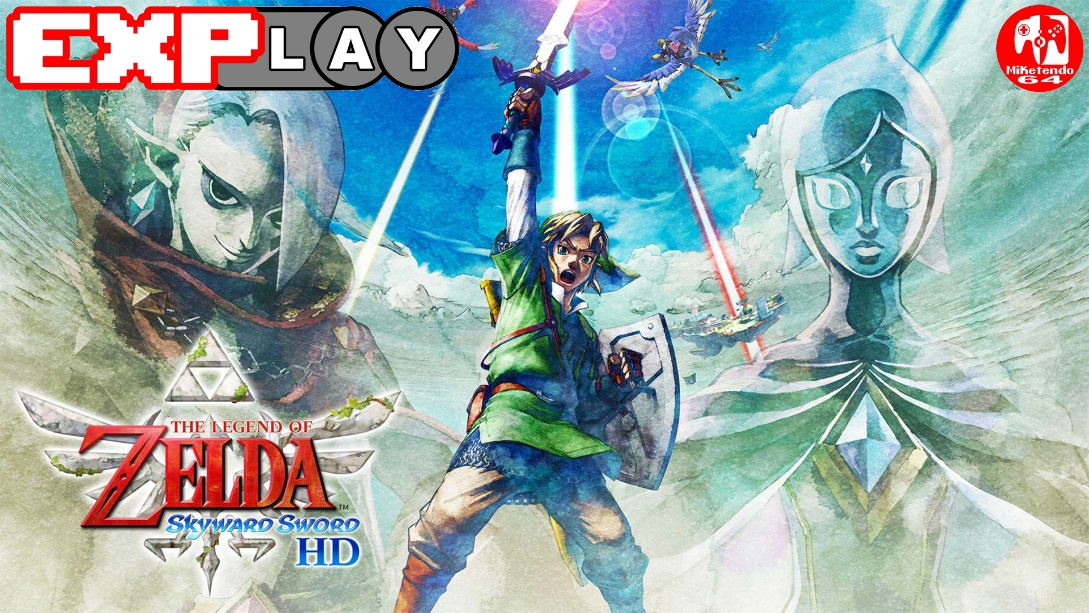 Welcome to EXPlay, (Explain & Play) the review series where we care not for scores but tell it how it is when it comes to every game we get our hands on, whilst also taking the time to include some lengthy gameplay, to give you the reader, the chance to shape your own impressions and views whilst watching and reading. In this instalment, we’re covering The Legend of Zelda: Skyward Sword HD by developers Tantalus Media who handled the port and the original development team of Nintendo EAD.

The Legend of Zelda: Skyward Sword HD: (The Explanation)

First and foremost, The Legend of Zelda: Skyward Sword HD is still very much so the game Zelda fans experienced previously. Storywise, it is the earliest instalment in the entire Zelda series and provides an origin story for Link, Zelda and endless hate that will forever be reborn to plague our noble heroes. It also introduces the Goddess Hylia, who is heavily referenced to and featured in The Legend of Zelda: Breath of the Wild, and a whole array of gameplay features, including a stamina metre, that would ultimately be improved upon and included in the 2017 dual-platform Zelda masterpiece.

Graphically, Skyward Sword took the artistic flair of The Wind Waker, fused it with the darker tones and 3D realistic characters of Twilight Princess and the fused result was the sublime beauty of Skyward Sword, which in turn would also serve as the inspiration for the graphics and art style of Breath of the Wild. Still, the game’s beauty was not only covered in its characters and colours, but its locations, dungeon design, and even in-game sequences.

For all intents and purposes, one could argue Skyward Sword is the early game beta that would eventually be reworked into the more superior Breath of the Wild. However, whereas Breath of the Wild looked to expand into new horizons, Skyward Sword closely followed the series’ typical conventions and became one of the strongest traditional 3D Zelda games, that was severely let down by its motion controls, which in the end resulted in the game getting more hate than every warranted.

For a game on one of the best-selling consoles of all time, The Legend of Zelda: Skyward Sword did not get the reception it is deserving of, so it is a fantastical opportunity that the game can see a HD revival that among its many quality of life improvements, includes much finer tuned motion controls that feel a hell of a lot more responsive and offer an accurate representation of the player’s movements. Just in case motion controls don’t take the players fancy though, players are free to utilise the game’s button inputs, but please be advised motion controls offer the best method of gameplay as this is a game designed around them and that some of the button inputs could have been better implemented, especially the sword fighting.

The only drawback to motion controls, is as far as camera controls are concerned, whilst players can easily move the camera when playing with motion controls, with button inputs, players will need to hold down the L button, whilst rotating the right stick to reposition the camera. The second sour taste that might be left in players mouths could be the graphical output of the HD release. The graphics haven’t been as improved as some had hoped they would, but a severe graphical upgrade isn’t always warranted for a game to be able to call itself a “High Definition” release, especially since they were HD to begin with.

Sure, the graphical changes here aren’t the same as those of Xenoblade Chronicles and Xenoblade Chronicles: Definitive Edition, but there are still plenty of other changes that warrant the HD title, which includes a 60 fps that is utterly fantastic and brilliantly speeds up gameplay, loading times and guarantees sharper swordplay. As for the other changes, Fi will no longer harass the player to the extent she previously did. Now she will only appear in cut-scenes and will only make herself known, should players seek her advice.

There is also a handy autosave function, three available save slots when saving your game, item information has now been made much more streamlined, ceasing unnecessary item descriptions every time you play, but there are even skippable dialogues for tutorials, on-screen text can now be fast-forwarded and any cut-scenes you wish to skip, can be avoided by pressing the – button.

Unfortunately, players will still need to do battle against a certain boss multiple times, as no changes have been made there, but things are still faster at least and the land of Skyloft is still as gorgeous as ever. Then of course there is also the other disliked new addition. Whilst the surface to land and vice versa fast travel function being locked behind an amiibo, can still leave a bad taste in the mouth for part of the Zelda fanbase, at the end of the day, the HD release is the definitive way to experience the earliest legend in the Zelda series.

What’s more, with the 2021 quality of life changes implemented, many of the criticisms players of the earlier version possessed, are no longer present, allowing more gamers the chance to enjoy the game that took heavily took inspiration from earlier titles, added plenty of new ideas and would ultimately become the basis for what The Legend of Zelda: Breath of the Wild would build upon. 2011 was a great time to play this game the first time around, but 2021 is the best time to play it.

The Legend of Zelda: Skyward Sword HD: (The Gameplay)