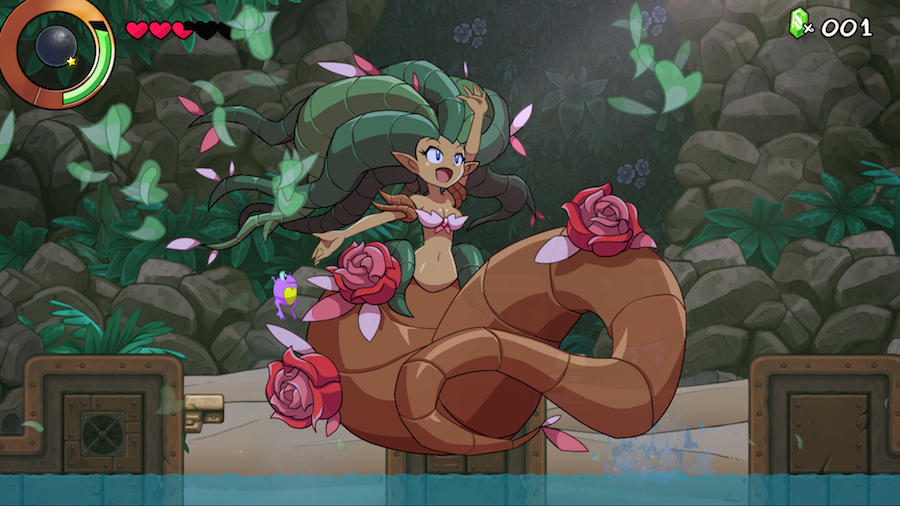 Just because we have to wait until May 28, 2020 to play the new Shantae and the Seven Sirens on the Nintendo Switch, it doesn’t mean there isn’t a selection of titles we can’t play in the meantime and in this guide, we’re covering all of Shantae’s Switch adventures:

Using the original 1988 NES title “Blaster Master” from Sunsoft as a base, Blaster Master Zero has many new additions, such as new areas and bosses, new gameplay elements such as extra sub-weapons, improved gameplay, a more robust scenario, refined and expanded exploration mechanics, and more.

In the near future on Earth, a young man named Jason Frudnick boards the battle vehicle SOPHIA III and sets off on an adventure in the subterranean depths of the planet.

On the side-view maps, take control of SOPHIA III and explore your surroundings as you search for the entrance to the dungeon where the area’s boss lurks.

Once you find the dungeon entrance, exit SOPHIA III and make your way inside as Jason and take on the mutants inside in top-down mode.

Defeat the mid-bosses and area bosses to acquire new items, sub-weapons, upgrades to SOPHIA III and Jason’s equipment, and new abilities and move to the next area.

What awaits Jason at the end of his long adventure…?

Shantae embarks on her first full HD adventure! When a mysterious crime wave sweeps Sequin Land, it’s up to Half-Genie Hero Shantae to save the day! Use Shantae’s devastating Hair-Whip Attack to send monsters flying, or Belly Dance to transform into a more powerful creature form! Topple the masterminds behind each criminal caper and prepare for the ultimate showdown against Shantae’s arch nemesis: the bodacious buccaneer Risky Boots!

Shantae and the Pirate’s Curse

Embark on a brand new adventure with Shantae, the hair-whipping belly dancing genie. When she loses her magic, Shantae must team up with her nemesis, the nefarious pirate Risky Boots in order to save Sequin Land from an evil curse. As a pirate, Shantae gains new weapons to advance her quest, slay monsters, battle epic bosses…and hopefully get her magic back in the bargain! But can she really trust her deadliest enemy?

This all-inclusive version comes with all of the previously released DLC, Modes, and Costumes!

Save the day as belly dancing half-genie Shantae! Conquer Sequin Land as the evil Risky Boots in ‘Pirate Queen’s Quest’! Swap between Sky, Bolo, and Rottytops in ‘Friends to the End’! And finally, wall-jump as Ninja Shantae, soak up sun as Beach Shantae, serve justice as Officer Shantae!

With tons of competitive modes for up to nine players online and eight players locally and a massive Single Player Adventure, Runbow is the crazy, color-based platformer you’ve been waiting for.

Indivisible is an action RPG / platformer featuring stunning hand drawn art and animation combined with unique real-time combat mechanics. Immerse yourself in a fantastical world with dozens of playable characters, a rich storytelling experience, gameplay that’s easy to learn but difficult to master, and the trademark razor-sharp quality that Lab Zero Games is known for!

Our story revolves around Ajna, a fearless girl with a rebellious streak. Raised by her father on the outskirts of their rural town, her life is thrown into chaos when her home is attacked, and a mysterious power awakens within her.

The game’s huge fantasy world, characters and aesthetic design are inspired by various cultures and mythologies. Throughout Ajna’s quest she’ll encounter many “Incarnations”: people whom she can absorb and manifest to fight alongside her. There are many Incarnations to recruit, each with their own story and personality. By uniting people from faraway lands, Ajna will learn about herself, the world she inhabits, and most importantly, how to save it.

Shantae and the Seven Sirens

Shantae is back in an all-new tropical adventure! In her fifth outing, the Half-Genie hero gains new Fusion Magic abilities to explore a vast sunken city, makes new Half-Genie friends, and battles the Seven Sirens in her biggest, most thrilling quest yet! Featuring multiple towns and more labyrinths than ever before, an awesome aquatic journey full of danger and discovery awaits!

Genie-girl Shantae is the self-appointed guardian of a small fishing village, Scuttle Town. Living life in a lighthouse rather than a bottle, she’s constantly on the lookout for danger. When the nefarious lady-pirate, Risky Boots catches wind of the treasure that was recently unearthed in the village, she launches an attack. To get Scuttle out of trouble, it’s up to Shantae to prove that she’s the rightful “Guardian Genie” to the best of her dancing, buying and hair-whipping abilities. Learn “Dance Magic” to get new attacks, and battle your way through over 50 locations and Mini-Games!

Relevance: One of the games in the Mutant Mudds Collection is Mutant Mudds Super Challenge, in which Shantae is a playable character

Relevance: Although not present as a fighter, characters Shantae and Risky Boots make an appearance as Spirits