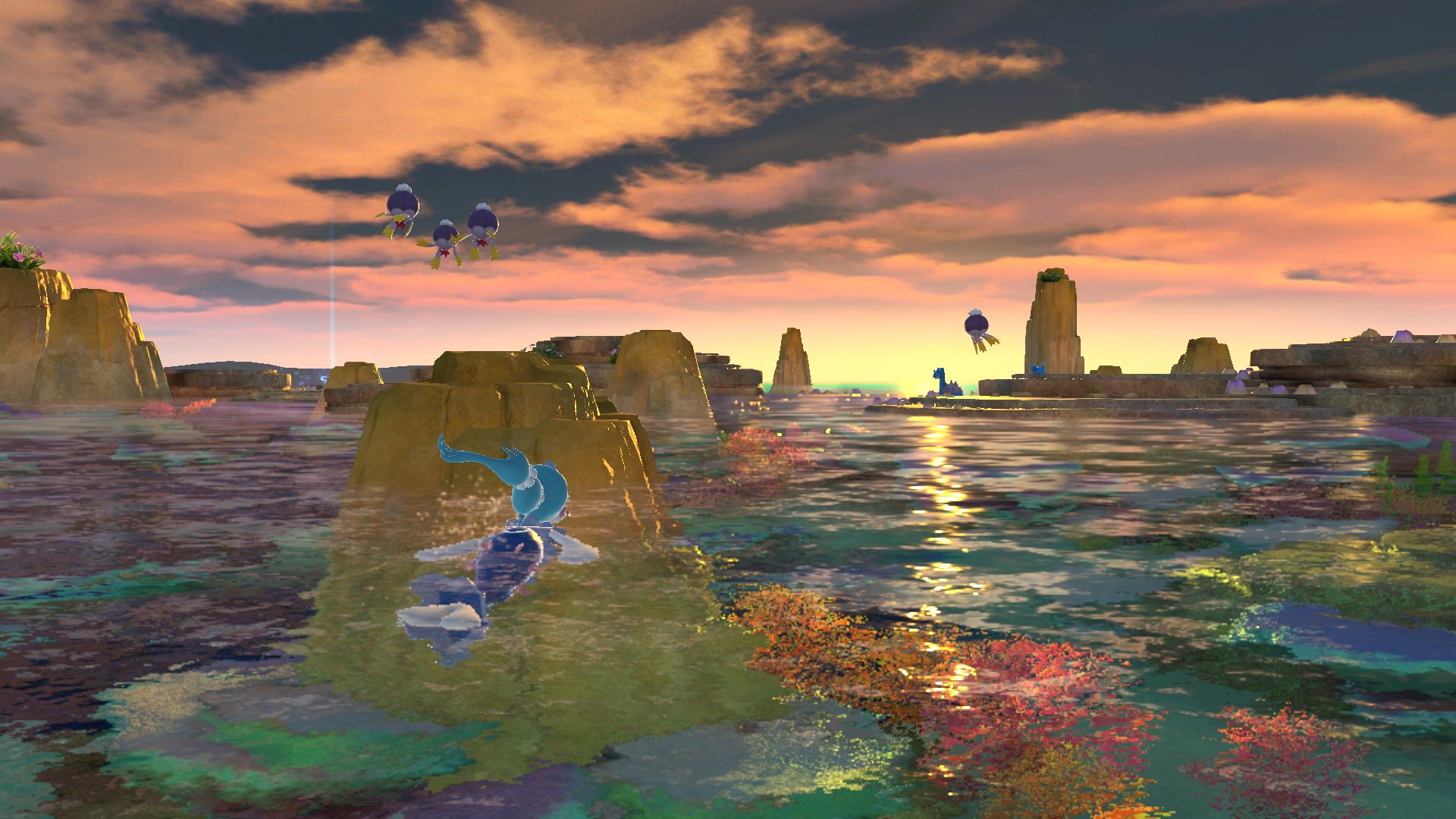 For those of you wishing to be the very best Pokémon Master, like no one ever was, when it comes to the Nintendo Switch, the journey can be quite a long one, thanks to an impressive and varied line-up of available titles, and if you’re unable to name them all, we’re going to do it for you:

Introducing the first Pokémon title for the Nintendo Switch console. Take direct control of one of 21 prized Pokémon fighters to defeat other Pokémon in arena fights. Call upon Support Pokémon to assist in the fight, then unleash your Pokémon’s unique Burst Attack to climb atop the ranks.

With all new modes and new ways to battle with friends, this is your chance to become champion of the Ferrum Region!

With a cube-shaped art style, Pokémon™ Quest is unlike any Pokémon game you’ve seen before. The simple gameplay makes it easy to hop into expeditions and start exploring Tumblecube Island with the help of your Pokémon buddies. Afterwards, head back to your base camp where you can use the loot you found during your adventure to befriend more Pokémon. Attract various Kanto Region Pokémon to your base camp by cooking up dishes made with collected ingredients! You can even decorate your base camp with fun items that provide helpful bonuses that make your expeditions more beneficial.

Hello new Pokémon Trainers, a demo of Pokémon: Let’s Go, Pikachu! and Pokémon: Let’s Go, Eevee! games is available just for you. Explore Viridian Forest, where you can catch Pokémon in the wild and battle trainers with either a partner Pikachu or a partner Eevee at your side (randomly selected). Start your journey now.

Take a Pokémon™ journey to the Kanto region with your energetic partner, Pikachu! Become the best Pokémon Trainer as you battle other Trainers, Gym Leaders, and the sinister Team Rocket. Catch Pokémon in the wild using a gentle throwing motion with either a Joy-Con™ controller or a Poké Ball™ Plus accessory, which will light up, vibrate, and make sounds to bring your adventure to life. You can also use button controls in Handheld Mode. Share your adventure with family or friends using a second Joy-Con or Poké Ball Plus (sold separately). You can even connect to the Pokémon™ GO app* using a compatible smartphone to bring over Pokémon originally discovered in the Kanto region! Explore the vibrant region of Kanto—home to beloved characters like Brock, Misty, and the nefarious trio Jessie, James, and Meowth! Throughout the story, your bond with your partner Pokémon grows stronger as you care for it and travel together. See the world in style by customizing Pikachu and your Trainer with a selection of outfits. True-to-size wild Pokémon roam around in the game—catch them like a real Pokémon Trainer by using timing and a well-placed Poké Ball™. Battle and trade with other players who own the game via local wireless or online**. Go on a stroll with your favorite Pokémon in your Poké Ball Plus to level them up, and to receive in-game rewards after returning them to the game. Connect to Pokémon GO* to transfer caught Kanto-region Pokémon, including Alolan and Shiny forms, as well as the newly discovered Pokémon, Meltan, from that game to this one!

A new generation of Pokémon is coming to the Nintendo Switch™ system. Begin your adventure as a Pokémon Trainer by choosing one of three new partner Pokémon: Grookey, Scorbunny, or Sobble. Then embark on a journey in the new Galar region, where you’ll challenge the troublemakers of Team Yell, while unraveling the mystery behind the Legendary Pokémon Zacian and Zamazenta! Explore the Wild Area, a vast expanse of land where the player can freely control the camera. Team up with three other players locally or online in the new multiplayer co-op Max Raid Battles* in which players will face off against gigantic and super-strong Pokémon known as Dynamax Pokémon.

Certain Pokémon can even Gigantamax to gain a new look and a powerful set of G-Max moves. But there’s more to being a champion than honing your battle skills: you can pick your own clothes and get a new hairdo while visiting the stores in town, so you can be the trainer you want to be. Throughout your journey, you’ll encounter newly discovered Pokémon as well as familiar ones that will look a little different in their new Galarian forms! For another way to level up your Pokémon, assign them Poké Jobs to complete, and for fun, you can even play with your Pokémon in Pokémon Camp!

What if you woke up one day, and you were a Pokémon? You can meet and recruit Pokémon in a dungeon-crawling adventure within their world! Build a rescue team to take on mysterious, changing dungeons and strategically plan your moves as you venture forth to make the Pokémon world a safer place…and uncover your true purpose along the way.

As you recruit Pokémon, these trusty teammates will need somewhere to stay, so build rescue team camps to house, manage, and strengthen your Pokémon friends. Think hard about who is right for the job and how to approach each mysterious dungeon as you prepare a rescue team. You’ll move a single square at a time or use Auto mode to speed up movement until you engage other Pokémon in turn-based battles—but don’t forget about Pokémon strengths, weaknesses and potential rare qualities! This version adds Mega Evolved Pokémon, gorgeous watercolor-inspired graphics, and more! Get comfortable in your Pokémon form, there’s a lot of work to do.

Link together Pokémon™ icons to clear puzzles as you work to build up your very own café in Pokémon Café Mix, a free-to-start game for the Nintendo Switch™ system! Meet the goals for each puzzle before you run out of turns—link a certain number of icons, get a high score, or even destroy sugar cubes to serve up Pokémon themed menu items.

Recruit Pokémon to help out at the café (in their adorable uniforms) by building friendship and expand your café and menu offerings by completing puzzles. Each Pokémon staff member has a Café Skill that will come in handy during puzzles!

Earn or purchase Golden Acorns, the in-game currency, and redeem them to regain hearts, continue puzzles, and get helpful items.

As you complete puzzles to build a world-class café, you’ll face obstacles such as sugar cubes, dollops of whipped cream, and tomatoes! Use your puzzle skills to clear them and employ the help of Pokémon’s Café Skills for some extra oomph! In addition to Café Skills, each Pokémon staff member has a specialty. Match a Pokémon’s specialty with the dish or drink you are making for bonuses in puzzles.

Once a day you can invite two randomly-selected Pokémon to your café. Looking for a specific Pokémon to join your staff? With Golden Acorns you can refresh this selection.

In addition to recruiting more Pokémon staff members and growing your collection of menu items, the café itself will expand as you play! Getting new tools or having areas added to your café may even draw in more customers. All the action in Pokémon Café Mix unfolds in a playful art style that brings out the cuteness of your Pokémon pals and patrons. It’s time to become a café owner, solve puzzles, and bring joy to Pokémon patrons!

Seek out and take in-game pictures of Pokémon in their native environments in the New Pokémon™ Snap game, only for the Nintendo Switch™ system! You’ll even discover behaviors and expressions you’ve never seen before when you encounter and research lively wild Pokémon.

Travel to unknown islands with beautiful scenery like lush jungles and sandy beaches. The Pokémon pictures you take there will be used to build your very own Pokémon Photodex!

This brand-new game brings the gameplay of the 1999 Pokémon Snap game for the Nintendo 64™ system to life on the Nintendo Switch system with unknown islands to discover and different Pokémon to see!

Photograph lively wild Pokémon in their natural habitats as you research and explore unknown islands. Journey through a variety of environments such as beaches and jungles to capture previously-unseen Pokémon behaviors. The photos you take can also be used to fill out your very own Pokémon Photodex!