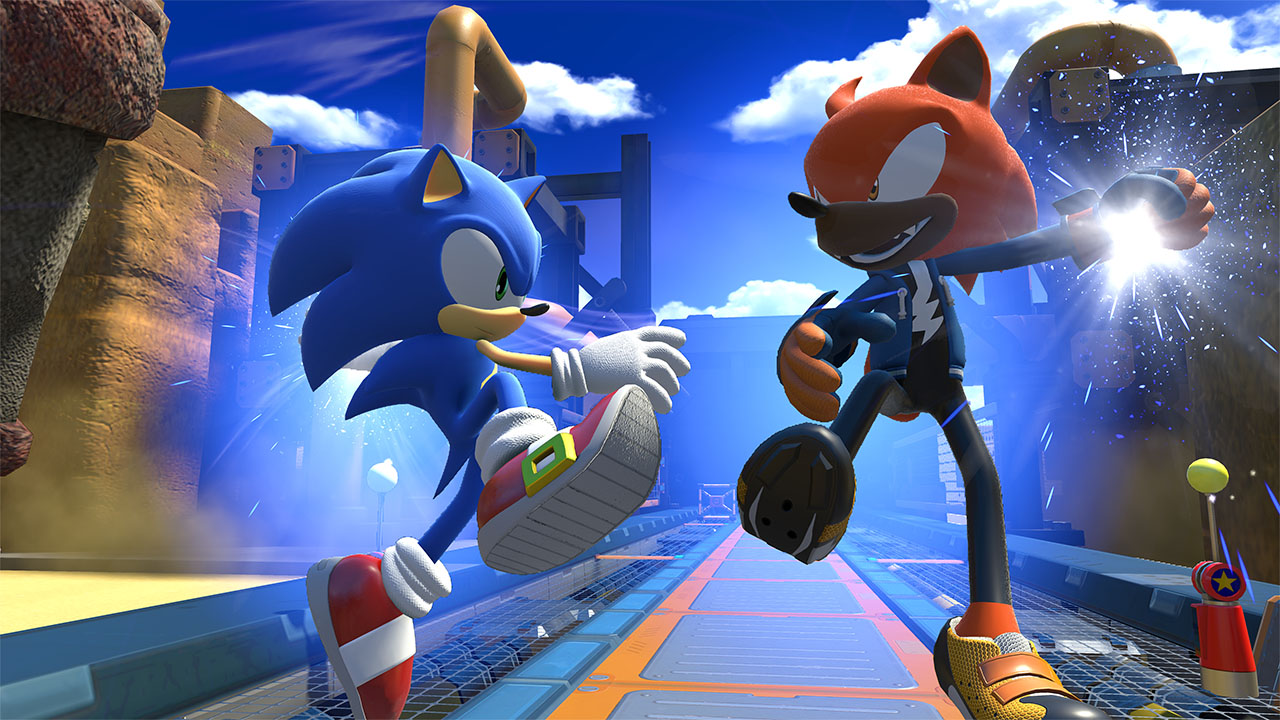 If you love a certain blue hedgehog and wish to play as him and friends in a game that’s not the brilliant Sonic Mania, don’t you worry! As far as the Nintendo Switch is concerned, there are plenty of Sonic titles you can dive right into and we’re covering them all:

Experience the ultimate celebration of past and future in Sonic Mania, an all-new 2D Sonic adventure running at a crisp 60FPS with stunning HD retro-style graphics. Multiple playable characters give you the ability to go explosively fast as Sonic, soar as Tails, or power through tough obstacles with Knuckles’ brute strength. You can re-live the Sonic of the past with an exciting new twist on classic zones while fighting against new bosses and Dr. Eggman’s evil robot army. Go head to-head with players in Competition Mode or play in Co-Op Mode with a friend. Sonic Mania was developed by Christian Whitehead, Headcannon, and PagodaWest Games in collaboration with Sonic Team. Welcome to Sonic Mania!

In SONIC FORCES, the evil Dr. Eggman has conquered much of the world with help from a powerful and mysterious new villain named Infinite. Now, you must assist Sonic and build an army to reclaim the world as they fight against chaos and destruction.

Defeat enemies with blazing speed as Modern Sonic, catapult past perilous platforms as Classic Sonic, and create your very own Custom Hero Character equipped with a variety of powerful gadgets. Experience fast-paced action with these three unique gameplay styles.

The fate of Sonic the Hedgehog’s world is in your hands – Join the Uprising.

SEGA AGES: Sonic The Hedgehog includes Mega Play, previously only available in the Sonic the Hedgehog arcade game. Familiar stages will feel new again as you race against time to the finish line. It’s a thrilling challenge for seasoned Sonic fans!

With features such as Drop Dash from Sonic Mania, Ring Keep Mode, and stage select, Sonic is a fun and accessible game for all players!

Team Sonic Racing combines the best elements of arcade and fast-paced competitive style racing. Face-off with friends in intense multiplayer racing, race together across stunning worlds and work together as a team by sharing power-ups and speed boosts. Take control of your racing style – Choose from 3 distinct character types and unlock game changing vehicle customization options to suit your racing style.
Gear Up. Speed Up. – Team Racing at Sonic Speed!

Team up with Mario™, Sonic, and friends on Nintendo Switch™ in action-packed sporting events! Bring your best moves to the track, the gym, the ring, or the water in dozens of different party games everyone will enjoy.

Skateboard, surf, and race your way to the top! With more than 30 events to master in this fun-filled Olympic Games contest, there are plenty of ways to prove your skills to your friends in multiplayer mode.

The team’s all here! Play as Mario™, Sonic, or choose from a star-studded cast of colorful characters from your favorite games.

Dive into unique Dream Events that layer fantastical chaos with reality. Zip through a downhill obstacle course on your hoverboard, throwdown for territorial control with lightning-fast karate action, or smash the most targets inside a traditional Japanese manor!

And you won’t want to miss an epic story mode that sends you to 1964 to compete in classic, retro 2D sports events.

Play any way you want on your Nintendo Switch™. We’re talking motion and button controls, single and dual Joy-Con™, single-player and multiplayer, local split-screen and online!

Hailed as one of the most successful Genesis games, Sonic The Hedgehog 2 garnered critical acclaim swiftly after its 1992 release. Follow Sonic and Tails (in his debut!) as they team up against Dr. Eggman in order to save the Chaos Emeralds from the clutches of evil.

Sonic The Hedgehog 2 introduced a competitive two-player mode that will be available once more, along with newly added features such as drop dash, rankings, time trial, and Knuckles!