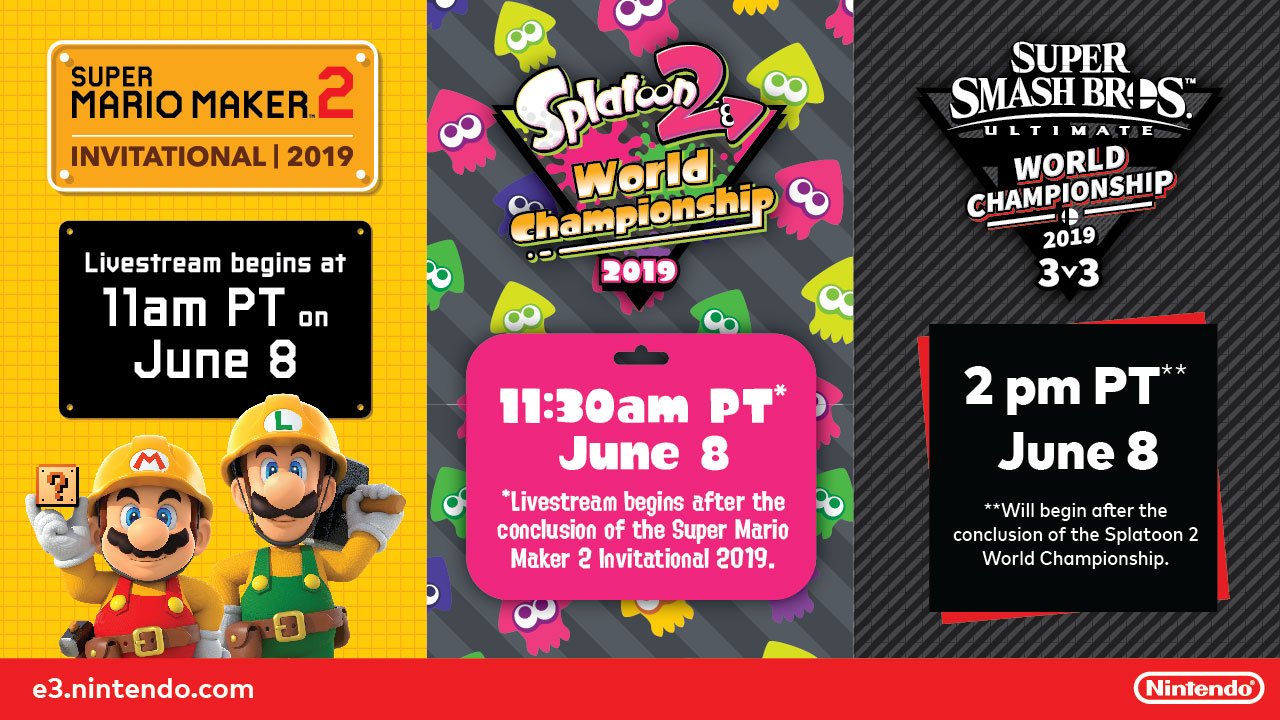 The countdown to E3 is certainly on. We are just 12 days away from one of the biggest gaming events of the year. Nintendo has just announced its E3 tournaments via @NintendoVS on twitter. There will be a Super Smash Bros Ultimate and Splatoon 2 world championships for 2019. A Super Mario Maker 2 Invitational will also be held

The #SmashBrosUltimate & #Splatoon2 World Championships 2019 are close, don’t forget to tune in to see who will be crowned Champion! The #SuperMarioMaker2 Invitational 2019 will kick off the action on 6/8 11am PT!

For the super smash bros championship there will be a 3v3 rule set. There will be four teams: USA, Japan, Europe and Australia. It will kick off at 2pm ET on 8th June. There will also be four announcers whom are;

The tournament format is split into three sections.

The full rule set can be found here

Each member of the winning team will win a 3v3 medal and a trophy.

The Splatoon 2 world championship will kick off at 2:30 PM ET. Once again there are four teams which are USA, Japan, Europe and Australia. The tournament format is as follows:

The winning team will each win a medal and a sterling squid trophy which will be sent to the winning teams regional Nintendo Headquarters.

Players will take on a variety of original courses designed by Nintendo’s Tree house.

The four players will each compete in timed speed runs.

Players will split into teams of two and work together to complete the course. The winning team will move onto the Finals.

The remaining two players will face off in three objective-based mini-courses and one final course to determine the champion.

The announcers for this invitational are Jordan Kent, Nine and Vish. I think it is interesting how the courses are designed by Nintendo’s Treehouse. Let’s hope they make some interesting courses for us to watch!. The winning team will win a Super Mario Maker 2 Invitational Trophy.

Nintendo states that 4 members of the Super Mario Maker community will attempt these courses. They have told us to stay tuned for more information so I assume we will find out who the participants are in the coming days