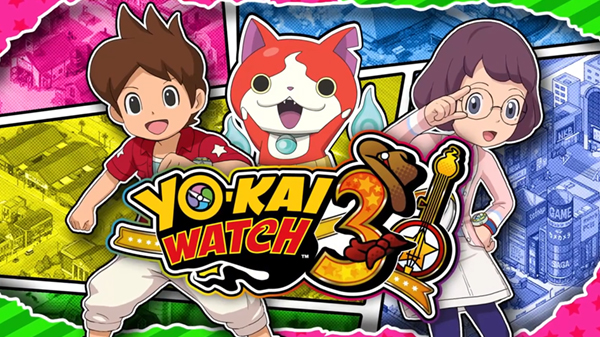 Yo-kai Watch 3 from Level-5 (the team behind the Professor Layton series and Fantasy Life) is a return to form after the slightly disappointing Psychic Spectres and the spin-offs, which features a brand new story and two protagonists. Quite frankly, it is by far the best game in the series and it’s time to find out why.

If you have played any of the main series games so far, you will be aware they are role-playing games featuring monster capture and battles. The games are based around the Yōkai of Japanese folklore, who are said to be ghosts that cause mischief in everyday life.

The series is a huge success in Japan and also does well in the West (despite selling under expectations initially), when the series eventually reached us in 2015, despite being first revealed in 2011. The first game is one of the best selling games on the 3DS. The success spawned an anime and toy collection (I myself own a Whisper plushie). The first game really set the bar high, followed by Psychic Spectres (the definitive version of the second game which was split into two games- Bony Spirits and Fleshy Souls), which was enjoyable but many said it was really just an enhanced version of the first game, with barely any new areas.

In this instalment we see series regular Nate (you can change the names of the protagonists) moving to St. Peanutsburg, a rural area near a beach and port. Nate has to contend with making new friends and Yo-kai causing trouble there too. FBY detectives Blunder and Folly (sound familiar?) are on the case, believing they are aliens. We also get to play as Hailey who is an upbeat anime addict living in high rise apartments in the city, who happens to come across a Yo-Kai Watch in a shop.

The game allows you to switch between both characters whenever you want to experience their individual stories and different Yo-kai. The two stories can sometimes link together and the game prompts you to switch to the other, however you do have the freedom whether to switch or not. Although I recommend not going to chapter 5 in one story and chapter 3 in the other for example.

The story is a bit more daft this time overall but that isn’t a surprise judging what the other games story-lines were like, and I do love switching between the characters when I wanted. I enjoyed spending time either on the beach or in the bustling city. I think if I had to choose, I prefer Hailey’s story as I feel she has more personality than Nate, and I loved visiting the Shoppers Paradise street where there are anime shops and a maid café, based around the real city of Akihabara in Japan. I would love to go to Akihabara in real life one day. With Yo-kai Watch being a brand new story, you could probably jump straight into this one as a newcomer, but it doesn’t give much history on who or what Yo-kai are.

With regards to the graphics, they are exactly the same as they are in previous games in the series. They are very colourful and pleasing to the eye. The sound effects and music are still quirky and fun- with the updated battle music adding more tension. Some of the soundtrack has stayed the same but that isn’t really a bad thing and I have no complaints. The voice acting on the other hand, can get a little irritating at times. Fortunately, the voice acting is only minimal and it was only really a couple of character voices that I found irritable.

The battle system is quite unique. The touch screen is used to execute special moves and use items while the Yo-kai attack freely. The battle system has been overhauled for Yo-kai Watch 3. This time adding 9 squares for your team and 9 for the enemy to move around in. This means that there is more strategy involved and ability to predict attacks and move squares accordingly. As usual, you have 3 Yo-kai attacking and 3 in reserve which you can switch out with when you need to. There are also new mini-games using the touch-screen which activates the special moves. You can also now move to a square to pick up HP or SP orbs. I found the overhauled battle system more enjoyable and felt I had more control and rarely was I just sat there waiting for them to attack so you do need to pay attention. In the previous games, there was a lot more waiting around.

Whilst experiencing the main story and catching Yo-kai, there are also other features in the game to keep you busy. There are villager requests, bug catching, fishing- which appears to be easier now and you can earn points to exchange for items, wanted poster Yo-kai, mystery quests, treasure hunts, gates of whimsy- which involves either a quiz, a puzzle or a challenge (for example defeating a number of Yo-Kai in a time limit) and more.

The controls in and out of battle are quite easy to understand and the game does provide tutorials as you play to ease you in. The A button the action button, you can use it to confirm options and talk to people. The B button is used to cancel or if held, allows your character to run. Y allows you to use the Watch and X opens up the Yokai Pad. In the Yokai Pad, you can access settings, save the game, view Yokai that you have captured and check out your quests. The L & R Shoulder buttons are used to rotate the camera.

As regards to any issues I had with the game, I couldn’t really find any faults with the game. There are only minor annoyances such as the voice acting for certain characters, and the overuse of certain words. These words were mostly used in the rural town, for example “darn tootin’” and “howdy partner” etc. However, it wasn’t really enough to negatively affect my enjoyment of the game.

In conclusion, Yo-kai Watch 3 is a much welcome return to form for the series which, also exceeded my expectations. It has very easily become my favourite game in the series. It is certainly a must-have for newcomers and old fans alike. I will most definitely sink a lot more hours into Yo-kai Watch 3 before the fourth installment releases on Nintendo Switch next year. The charm of the other Yo-kai games is here and is taken to a whole new level. If you have yet to play a Yo-kai Watch game before, you should certainly consider picking this one up.