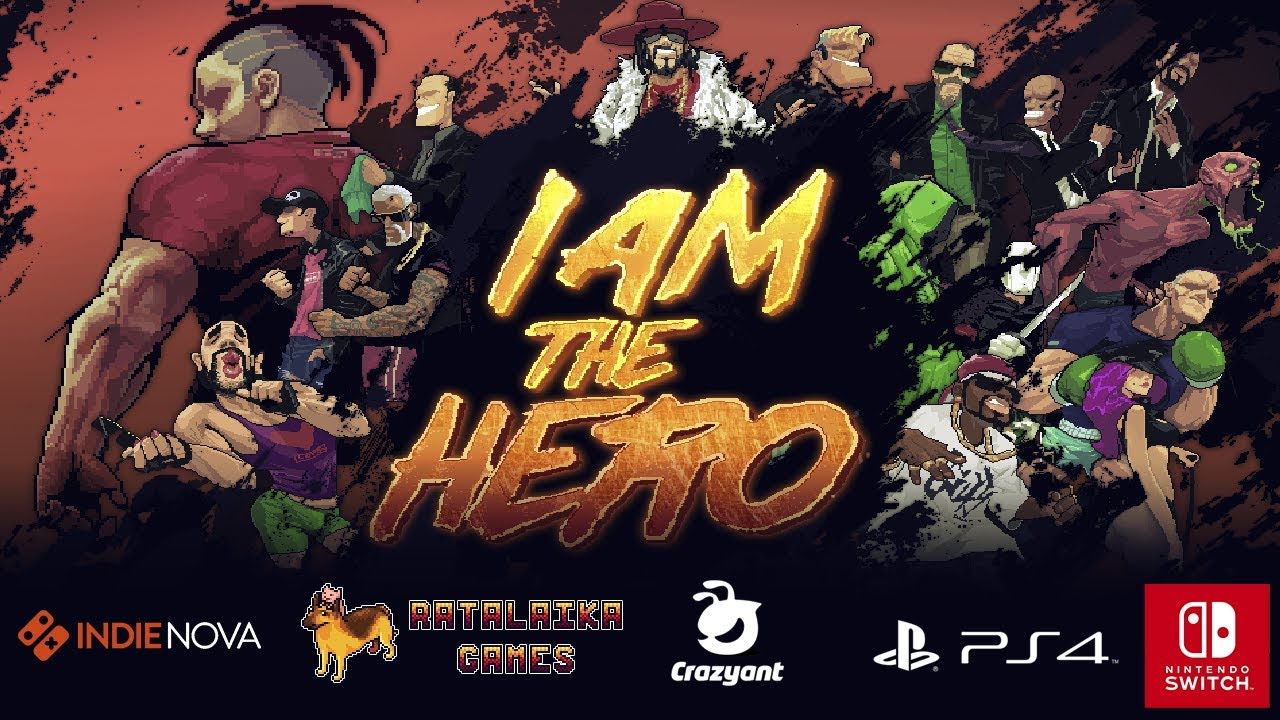 [Review] I Am The Hero (Nintendo Switch)

I’ve got a hero living in me, do you?

Heroes come in all shapes and sizes and not all of them have super powers. Some are just as ordinary as you and I and some are really good at taking a punch in between administering pain upon others and it’s because of heroes such as this that we get to write about I Am The Hero!

Previously released on the likes of Steam in January 2017, I Am The Hero is a side-scrolling, 2D pixel art beat ‘em up developed by Crazyant. It is also a game that tells the story of a nameless hero with a glorious past, but is he the hero he believes himself to be or is he just a poser with an overactive imagination?

To discover the truth and learn the answer to the question posed above, players will need to endure 6 levels, 6 boss fights and a lot of minions. Only, don’t go expecting I Am The Hero to be a story packed affair, as there is very minimal throughout the game, with a small spoonful fed to you at both the beginning and end.

Just because it’s lacking in story though, it doesn’t mean, that’s no reason to write it off just yet, since the most important thing a brawler game could focus on, is the actual brawling and I Am The Hero does deliver rather well in this regard.

The actual combat is rather fluid and can be as basic as you want it to be (just sticking to the basic punches and kicks instead of going all in on the EX-Skill combos,) and you will never have to settle for just playing as the one character, as I Am The Hero features 18 unlockable characters, and they each like to do things their own way.

Furthermore, every time you complete the segments that make up a level, players can then choose to learn a new EX-Skill, or unlock a character and by choosing the later, you will be able to play as them on the next level.

On top of being able to use their strengths and skills to give yourself an edge, they also have their own health bar, so should a certain boss prove too difficult, you can always swap over to your other playable character, and use them to finish what your first character couldn’t.

In the event you still can’t conquer your current level though, you can always opt to quit to the menu and spend some time checking out the HERO’S GUIDE. With plenty of fighting tips available, you will be a pro in no time and if you still need help, you can always play with a friend and beat the main campaign together. Heck, if Standard mode is suddenly too easy for you, you can always then attempt the campaign once again, but on a harder difficulty.

Now, although story mode is a great way of unlocking characters, it’s not the only means of getting characters as some will require you to take on WORKSHOP-FIGHT and survive a set amount of waves. Word of warning, while WORKSHOP-FIGHT does support co-op, it also features Boss Waves that will have you take on the bosses from the main game.

Of course, there’s nothing wrong with that, it just means WORKSHOP-FIGHT is not a cakewalk and honestly, if it was easy, then it has no place in an odd school styled brawler. It also makes up one half of the game’s CHALLENGES, with CHALLENGE FIGHT being the other mode and both support leaderboards, which means anyone and everyone who has the game, can marvel at your prowess when you pull off an impressive feat.

As far as cons are concerned though, there are a few typos all throughout the game, and it would have been nice if there was a proper explanation to fill me in on why I’ve gone from beating up thugs, to assaulting rappers and zombies. Sure the enemies are meant to fit in with their given level’ surroundings, but a reason for unleashing mindless violence would have been appreciated.

If you are after a love note to old-school fighting games that comes packed with free-style combos, fluid combat and the means to deal devastating damage thanks to critical blink, then I Am The Hero is the game for you. It is the arcade fighter you always wished you played, but never did because a friend of yours said it was too short.

Yes, it is short in nature, but it does replay value and it’s a near-flawless port and it’s is a great little title you can sink some time into, while you wait for the eventual release of Super Smash Bros. Ultimate.