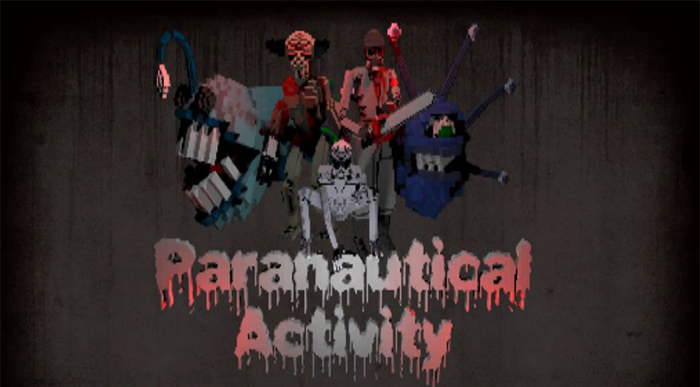 Paranautical Activity is a game that has been through a lot. It released years ago on Steam, and was met with interesting responses when it launched. I can’t help but link the somewhat interesting backstory of this game with its gameplay, as both seem so utterly confusing and unnecessary that I find myself left with nothing left to see other than a few barebones features. After hearing that Paranautical Activity was originally taken off of Steam due to death threats to Gabe Newell from one of Paranautical Activity’s developers, I was intrigued about what all the fuss was about, and after playing through this game, if I’m honest, it wasn’t worth the problems it caused.

Paranautical Activity is primarily a roguelike first-person shooter that has a similar room structure and gameplay feel to a game such as The Binding of Isaac. It’s your job to choose a gun loadout which each have unique features such as speed and power and using these stats, as well as your guns and bombs, to clear rooms of enemies and bosses to make it to the top floor of the dungeon.

While the game is a roguelike, which features procedurally generated rooms, I never felt that randomness while playing, nothing felt different when I started over, as mostly the same rooms are copy/pasted over and over, which instead of making the dungeon worth exploring, just made it downright boring and confusing at times. There are generic enemy-filled rooms, as well as shops (where you can buy different items using coins found from eliminating enemies) and treasure rooms where you can buy health, armour and different weapons to change up your loadout.

Movement, gunplay and enemies in Paranautical Activity feel downright clunky and unresponsive. There is no real story. There is no satisfaction in killing an enemy or shooting a gun. Every single gun feels like a bubble blower, with no impact or an animation to make any of it interesting. Every enemy feels like a bullet sponge with no real purpose, and any cool mechanic they tried to implement with different enemies just added to the tediousness of it all.

The movement is slow and boring and moving from room to room just feels really, really uninteresting. For the entire duration of the game and the experience I had with the gunplay or movement I never found myself stop and think, ‘wow, that was really cool’. In fact, there was one part, where a boss was literally unbeatable. Not because of my skills, but because it punished me for choosing the loadout I wanted to use. The balancing is awful.

Paranautical Activity’s art-style is something to behold – and not in a good way. Voxel art is one of my favourite art styles in video games when done right and Paranautical Activity does not do it right. There is almost no texture or depth to most of the models, and even when there is, it’s too dark to even see any of it. I found myself running into walls or ramps because I couldn’t even see them and every single enemy or gun looks like a botched Minecraft creation.

The menus and UI look horrendous. The font they chose is so difficult to look at and just makes using the main menus a strain on the eye. Paranautical Activity’s soundtrack is average. It suits the game’s fast-paced action well, but it can become boring after a while. It’s not a soundtrack I would want to listen to on repeat, though.

If I’m fair, the premise and idea behind Paranautical Activity is unique and works well, it’s just nowhere near comparable to its other competition on Switch. The Binding of Isaac, Heart&Slash and DOOM are all games that consist of the same gameplay, but done better. It’s a shame that what could have been an overall fun and enjoyable experience was overshadowed by its graphics, bugs and boringly executed gameplay. After going through it a couple of times, I felt like I had seen it all, it’s a game you pick up once and you never have interest in picking up again, it’s a wasted opportunity. However, if you’re a super fan of the roguelike genre and want to try something fast-paced and action heavy (but with no real substance or satisfaction) then have a go. Just don’t expect something glorious.