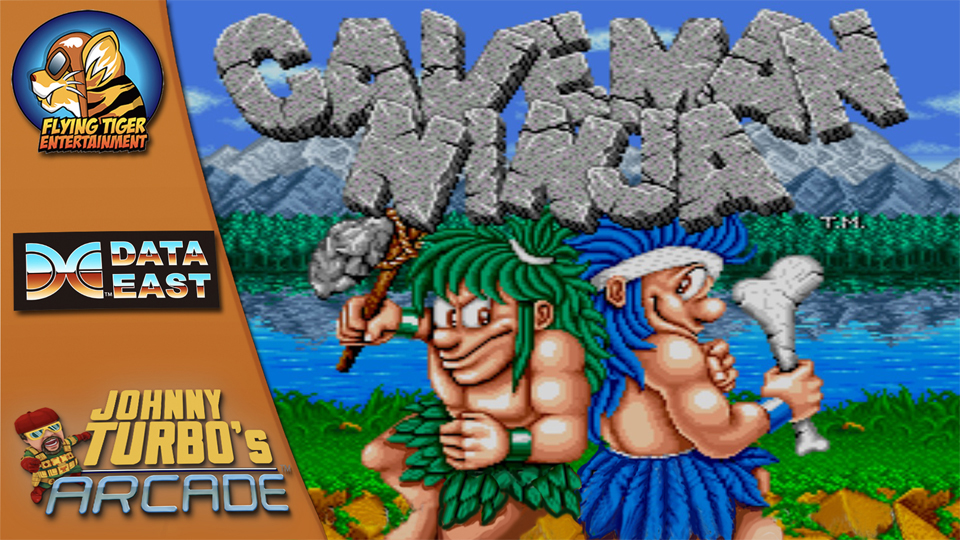 One of the Switch’s biggest markets is the abundance of classic arcade games re-released for the system. Along with Neo Geo and the Nintendo Classics line of games, Johnny Turbo has started to re-release some of the cult classic hits from 90’s arcades. One of these newer additions is Caveman Ninja, otherwise known as Joe and Mac: Caveman Ninja. The game is a fun, action platformer with a very strong arcade vibe – the charm, visuals, music and gameplay all bring a wave of nostalgia, and with the entry price being very cheap and affordable, I would happily recommend to anybody who is a fan of arcade platformers, to give it a go.

The plot of Caveman Ninja is fairly simple and generic for a 90’s arcade game – Joe and Mac, one green and one blue-haired cavemen are chilling in their prehistoric hut when, suddenly, their ‘cave babes’ are stolen by a rival tribe! It’s you and a friend’s job to battle through dangerous jungles and fight fierce dinosaurs and prehistoric creatures, while saving your cave babes along the way. Even though the story does seem extremely basic and boring, the gameplay compliments it well, as after each boss you’ll find yourself saving yet another cave babe.

The gameplay of Caveman Ninja is fairly simplistic, yet offers a various amount of ways to experience it. The game is primarily an action-packed side-scrolling adventure game, with cooperative elements. During the game, you’ll mostly be throwing your hammers at enemies such as a Tyrannosaurus Rex and Pterodactyls while dodging their attacks and traversing through the dangerous environments. The main levels are fairly short, a couple minutes to travel through the bulk of it, however, the boss fights are where most of the fun lies. Each boss fight is different and unique and requires practise, to find the perfect strategy for defeating it. These boss fights can offer quite a challenge, especially since the first level throws one right at your face.

Caveman Ninja on Switch offers a great co-op multiplayer experience. There is a simple drop in/drop-out mechanic which works well for the style of game. The second player can do exactly what the first player can, and it allows the game to be played through much easier, as enemies are taken out a lot faster and any deaths can easily just be brushed off – as long as someone else is still alive, you can respawn freely. It makes the game lose a lot of the difficulty I found made the single-player unique, but it’s definitely better if you find yourself stuck or you find it difficult to progress.

The game’s overall theme is outstanding, the visuals are old, yet charming and unique and the game always feels vibrant and exciting. The music is extremely nostalgic and has a wonderful couple of beats to listen to while playing. What is probably the most exciting thing about this game’s theme though, is the ability to customise the screen. There are multiple filters and aspect ratios to choose from to customise your experience, for example, you can choose between 4:3 and 16:9 aspect ratio, it’s fairly better to play 4:3 as the screen isn’t stretched, but it’s all up to the player to decide what they prefer. The screen styles are a great way to bring back memories, you can change the default pixel-art to any of the filters that you’d find on older TVs such as Scanline, RGB and even a VHS filter. These can lower the quality, but add even more charm to the game, as I found myself keeping them on.

Overall, I’d recommend Caveman Ninja to anybody wanting a blast from the past, the gameplay is great at keeping true to the original arcade game, and it’s definitely a game with a lot of charm. However, if you’ve never experienced this game in an arcade, or don’t have that much experience with arcades in general, you most likely won’t enjoy this game, as there are better modern side-scrollers on the system. With its quirky visuals and charming gameplay features, Caveman Ninja is a cheap budget arcade classic you might want to take a look at.