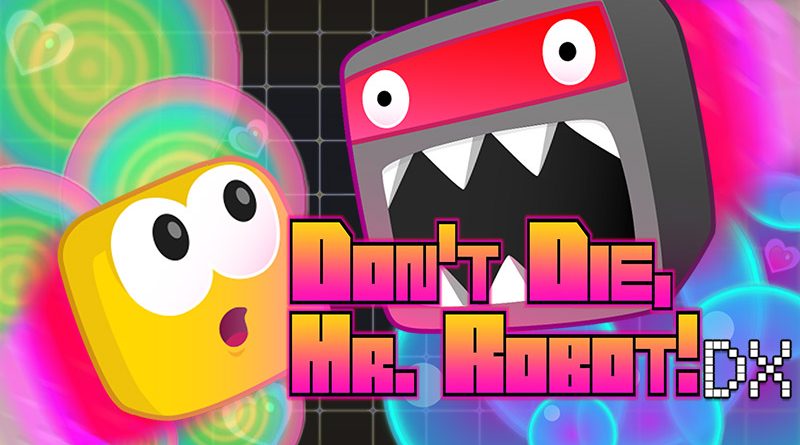 Mr. Robot needs your help to survive the endless onslaught of mechanical enemies coming towards him and developer Infinite State Games Don’t Die Mr. Robot! DX takes the ‘dodge em’ up’ formula to a whole new level. The gameplay is fun most of the time and there is a lot of content for its modest price tag. Unfortunately, a few issues hold it back from not being much more than a fun gaming distraction.

Don’t Die Mr. Robot! DX features several modes with the main mode being Remix mode. This is where you have to complete a number of missions which are slight variations around the basic premise of survival. Remix mode also works as a great tutorial in teaching the basic gameplay mechanics and techniques to attain higher scores.

The gameplay is very simple with you mainly dodging and destroying enemies by touching exploding fruits scattered throughout a stage. It works well enough and it can be rewarding to rack up high scores in quick succession. I liked the addition of being able to hold down the shoulder button to move slower as you get bonus points for grazing enemies. The only major issue is that enemies spawn on or on top of you way too frequently and this can get annoying fast.

Unfortunately, the gameplay does not progress much and this results in the Remix mode becoming repetitive after the first five chapters. Additionally, to unlock future chapters you have to earn high enough scores in current levels and considering the Don’t Die Mr. Robot! DX is difficult enough, you might have to replay the same levels multiple times.

In addition to Remix mode, there are also Time Attack, Arcade, and Chill Out modes. The first two offer short distractions and are great for this who want to chase high scores, but even this is half-baked as there are no online leaderboards and you can only chase your own scores. Chill Out mode however, is too slow to be entertaining, but is a nice way to wind down from a stressful day.

Visually, Don’t Die Mr. Robot! DX has been updated with brighter colors and crisper graphics, although this is a game that looks much better in handheld mode than docked. Being on the big screen just doesn’t do the simplistic visuals any favors.  There are some positives in the presentation with the original neon colors, but the aesthetic gets too repetitive to hold your attention for long.

I definitely enjoyed the music, with many great tracks almost making me want to buy the soundtrack with its infectious pulsating techno beats. What Don’t Die Mr. Robot! DX lacks in the visual presentation, it more than makes up for it in content. In addition to multiple modes, you’ll also be able to unlock new costumes and characters. Unfortunately, the touch controls from the PS Vita version weren’t included in this edition forcing you to just use the buttons.

Overall, Don’t Die Mr. Robot! DX is a fun experience that is lacking in replay value. There are some issues with where the enemies spawn and the repetition with gameplay, but there are satisfying moments and plenty of modes to take part in. It’s certainly not for everyone, but if you are into dodging enemies and chasing your own high scores than this might be for you.