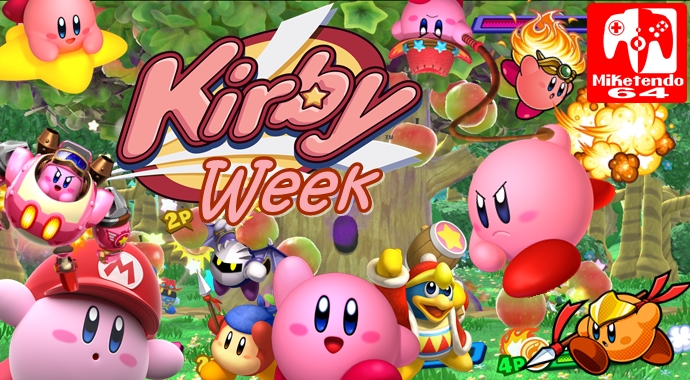 [Announcement] He’s Pink, He’s Round and if He Likes your Moves in Smash, he’ll Steal them! #Kirby Week has Arrived!

I know what you’re thinking, why did we end #BayonettaWeek? Bayonetta is awesome, her games are awesome and even #BayonettaWeek was awesome, but that was last month’s flavour and this month, we’re all about our man Kirby!

When it comes to Smash on the Nintendo64, when I wasn’t playing as Link, I was playing as Kirby, not to copy my opponents abilities, but just because I wanted to inhale them and shoot them off the ledge, like a cannon ball. Since those good old days, as he was never really a character who appealed to me, as Zelda and Pokémon games were all I needed, I never really took to playing every game he was in, or playing as him in the later Smash games, but after years of putting him on the back burner, it’s time to make amends. So, from March 12 to the day’s end on March 18 at 23:59 PT, Kirby is going to be our main focus and as such, there is a giveaway!

For anyone who would like to be in with the chance to win a couple of Kirby Star Allies for Nintendo Switch, all you need to do is be following Miketendo64 on WordPress, or on Twitter (@miketendo64) and tune in to our live Twitter show on March 14 at the following times:

One lucky follower who happens to meet the requirements and be watching the stream, will win a physical copy of the game, regardless of where they are in the world thanks to Amazon. So, if you read this and then later on win, during the show, we will be in touch to get your postage details so we can ship it to you ASAP. As for other things we’ve got lined up for this week, a sample can be summarised below:

We hope you’re just as excited about this week, as we are! So, to make sure you don’t miss a single thing, be sure to keep an eye out for the #KirbyWeek hashtag we’ll be using on Twitter and if you use it yourself, it helps us to see what you guys are doing this week as well.