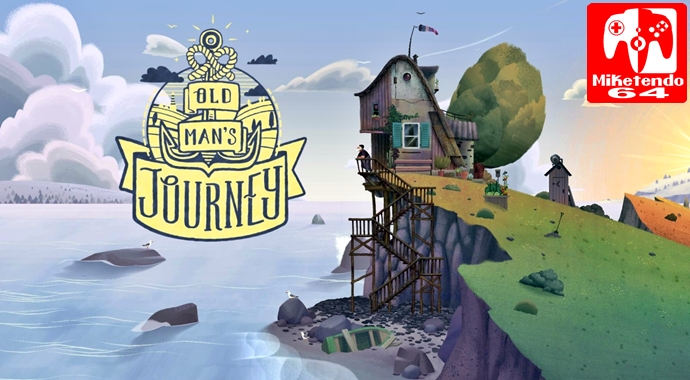 Remember the film Up? Get ready to experience something similar as Old Man’s Journey has arrived on Switch and it’s just as emotional!

Old Man’s Journey is an emotional, story-based, point and click puzzle adventure that puts you in the shoes of an elderly man. It’s hard to write an in-depth review on a game such as this without spoiling much of the story, as that is the main premise here. Old Man’s Journey may not be the most complex and interesting gameplay-wise, but the fantastic visuals, music and heartfelt story about this elderly man’s life give players an experience they’re likely never going to forget.

The story of Old Man’s Journey is phenomenal. It’s an emotional, dialogue-less story about the hardships of life, but also the beauty and hope. As someone who has never been moved much during a movie, book or game, I’m proud to say that Old Man’s Journey is the first piece of media that’s made me genuinely cry; it’s honestly that well-crafted. It begins on a rickety house on a cliff – the old man receives a letter, which prompts him to leave and go on a trek. Throughout the game, you will learn more about the reason behind and who wrote the letter, with flashbacks of the man’s life and his family.

The gameplay of Old Man’s Journey is simple but unique. You move around the environment so that the background and foreground connect so that the Old Man can jump between them. Some parts require some thought and actually pose as quite the puzzle. Many different obstacles and environmental differences add some challenge to each level, from waterfalls that make you fall down to sheep that you’ll have to find a way to avoid. There is also a couple of levels where you’ll be inside of a truck or train, and the environment will have to be connected in front of it as it travels. Overall, gameplay-wise, a lot of different unique mechanics are utilised that keep most of the levels feeling fresh.

The visuals for Old Man’s Journey are beautifully crafted, vibrant and unique in style, this game’s graphics will keep you craving for more of the kind. Each scene looks like a page ripped straight out of a children’s picture book and have that jaw-droppingly nostalgic feel. Each cut-scene is a work of art, which you can admire for as long as you’d like with the foreground and backgrounds moving slightly, making the game feel alive constantly. Along with the visuals, the soundtrack for the game fits perfectly, both compliment each other really well allowing for a tranquil, deep experience while playing.

Old Man’s Journey offers multiple play-styles, all of which compliment this type of game wonderfully. You can simply play in handheld or TV mode with the Joy-cons or Pro Controller, using the analogue sticks and buttons to interact with the environment — or you can use one of the other unique multiple ways to play too; such as full touch-screen support to play without Joy-Con or you can set up each Joy-Con to act like a Wii remote, similar to World of Goo. The Wii-remote style of play is by far the best, it feels the most fluent and smooth, the feeling of grabbing a hill and dropping it in place is seamless with the point and click mechanics. Along with HD Rumble, which allows you to feel the interaction of moving hills, placing flags the feeling of flowing water from the waterfall, Old Man’s Journey offers so many different ways to experience this visual novel for yourself. You can also play through the game cooperatively, but there isn’t much incentive to do so, and a game such as this, doesn’t necessarily feel right with two-players; it’s much more rewarding to find out everything by yourself, but even so, it’s there if you want it and doesn’t hinder the game in any way.

If you’re looking for a game on the eShop that doesn’t exactly have that much ‘gameplay’ (about two hours of it, in fact) and is more about the story and visuals than anything else, then Old Man’s Journey is the game for you, there isn’t much replayability or difficulty but it’s still an experience that anyone looking for a quick $10 game can remember fondly. It shows so much heartbreak, perseverance and emotion that it’s hard not to ignore. Old Man’s Journey is going to be my go-to title for ‘hidden gem’ on the eShop and I’d highly encourage anybody else interested in unique point-and-click story games to give it a try.