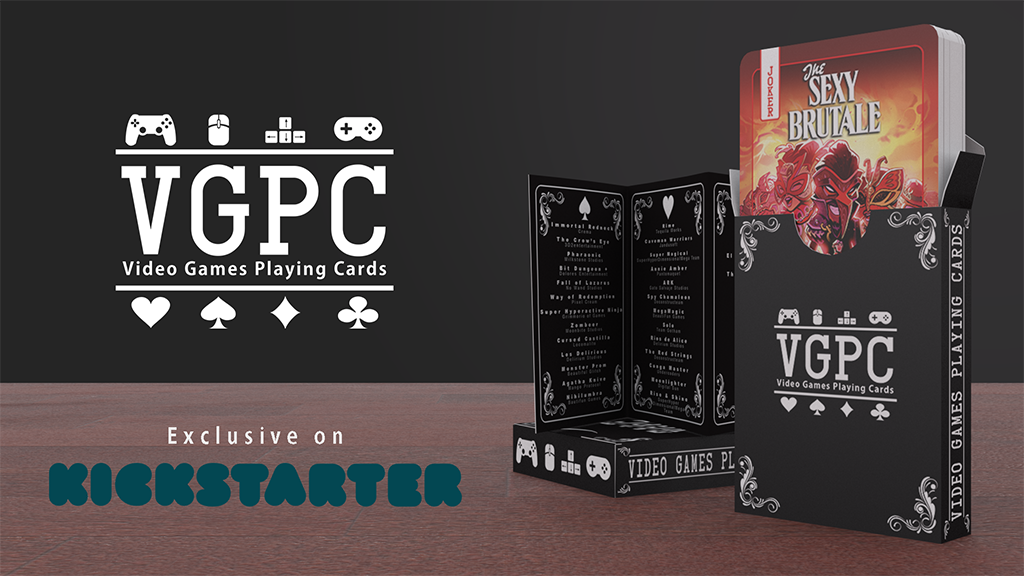 Get Your Hands On Exclusive Video Games Playing Cards Via Kickstarter

Game Development company Jandusoft (Caveman Warriors) is collaborating with 53 other indie game developers to put together a set of 54 Poker Playing Cards, each with their own exclusive and licensed artwork featuring Sexy Brutale, Rime, Dimension Drive and Immortal Redneck. The Kickstarter is live now and will run until Wednesday 24th of February from 6:00PM UTC and you can get to the Kickstarter page here.

We got in touch JanduSoft to find out a little more about these playing cards.

M64: What prompted the development?

JanduSoft: As a game developer team, we have meet with a lot of videogames companies in several events. One day, I thought that making a poker deck, based on some of the games we have met on this events, could be a great idea. After some time asking for companies to let us make this project, we made VGPC possible.

M64: How long have you been working on It?
JanduSoft: About 1-2 months
M64: Will more game decks be added?
JanduSoft: Maybe, but I’m not sure
M64: Will additional platforms be considered?
JanduSoft: Only PC/Console games, no mobile games
M64: Detailed Summary on what it is?
JanduSoft: It’s a sealed EXCLUSIVE KICKSTARTER LIMITED EDITION DECK with 54 Indie Games , one indie game on each poker card. The deck also have a custom booklet with information regarding the developers of each game.

And without further ado, here is the lowdown on theVideo Games Playing Cards (VGPC) courtesy of JanduSoft PR:

This will be an EXCLUSIVE KICKSTARTER LIMITED EDITION DECK and will not be reprinted anymore. Ever.

The kickstarter will begin on Wednesday 24th 6:00PM UTC

With a lot of “Well known games” and “Little Gems”, VGPC will showcase a collection of cards from Indie Videogames, especially manufactured for collectors.

This could not be possible without the help of this companies: