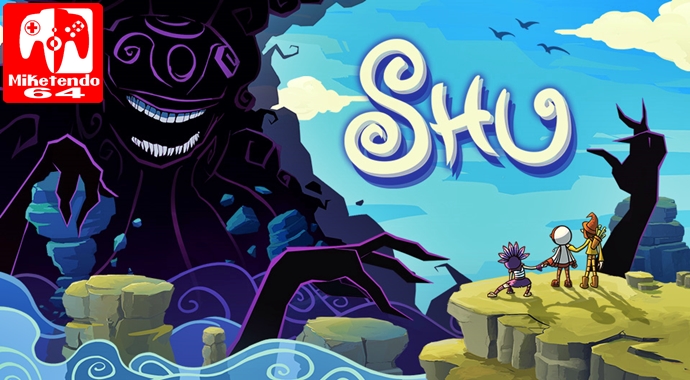 Whether you’ll be blown away, or blown over, a storm is coming and escape is the only option.

Featuring designs by Jonathon Wilson and out now on the Nintendo Switch, Shu is a 2D platformer that takes place in a world, made up of interesting hand-drawn characters and locations. Only, while everything was fine and dandy, the peaceful civilians will soon find themselves being tested for the end of the world is coming and it does so in the form of an unrelenting storm that is more monstrous than The Legend of Zelda: Skyward Sword’s “The Imprisoned.”

There is nowhere in the world of Shu that the storm won’t pursue you, so with no other choice, all you can do is attempt control the titular character Shu, in his efforts to outrun the end of the world, across 5 different lands, made up of a total of 15 sizeable levels, packed full of collectables, (in the main game, as the post-game events of Shu offers a 6th land made up of 6 levels,) by reaching the one place that will give you the chance to fight back, an ancient tower.

As a platformer, all the your expected typical running and jumping is well and truly present throughout, as all of the game’s levels will have you doing a great amount of it, whilst dodging hazardous obstacles that can kill you in one hit, but there are other obstacles that need to be dealt with. Things like walls of flowers that can only be passed through, provided you have the right power to get access, water that can be run on and even pipes that blow out air that can be used to send you in the direction it’s aiming at. Only while powers are needed to overcome these trials, Shu is a platformer where powers don’t actually exist. While Shu can use the R or L buttons to glide across vast distances and along updrafts, Shu is not the only character in Shu who has something to offer.

In addition to Butterflies (a coin like collectable litter all throughout each of the 15 levels,) murals that when gathered, can reveal story events regarding the world of Shu, and 6 Owl-like “Babbies,” Shu also has a total of 10 unique characters who can be encountered and possess a power of their own that allows you to interact with the environment in a way you couldn’t before. The problem with the characters though, is you don’t actually get to know them for very long, due to the fact that they don’t stick around long enough for you to master their skills and are not really shown again, until on the final level, when you must work with each one of them, for the final run away from the evil storm.

Oh, and on the subject of running, you will be doing a whole lot of it and I don’t just mean from one side of the level to the other, but running for your life because there are instances of Shu, where you find yourself engaging in Chase sequences, which consists of the storm having caught up with you and you need to drastically flee to the best of your abilities, because one simple mistake is all it will take for you to get devoured in the process, which is something that will happen a lot. Due to controls that aren’t as good as they could have been, dangerous surroundings and one hungry purple storm that is never satisfied, Shu is a game that can go from being child’s play to downright evil due to its difficulty and will result in plenty of frustrating deaths that you would be right to argue, was not your fault.

Fortunately, as far as lives are concerned, while you can’t earn lives as such, so if you lose all 5 its game over and you must restart the current level all over again, there are however checkpoints dotted over each of the levels and not only will they save your progression, but they’ll restore all 5 lives as well, which is especially handy when undergoing those Chase sequences that are uses so much that you can find yourself despising them and the overusing of them, come the third land in, if not sooner. Should this fact fail to discourage you though and you’re more than happy enough to invest a good few hours into Shu, there is a fact or two about Shu that you should enjoy.

Provided you have already beaten a level, a time trial on it will be unlocked, so when you replay it, you can attempt to beat the time it took you to beat it the first time round and collect everything you previously missed out on the last time you were there as Shu actually remembers everything you collected and displays it in a lighter colour, so if there’s a Butterfly you missed, it will be shown in its original colour, whereas a Butterfly you’ve collected previously, will be a lighter shade, indicating you’ve acquired it earlier, so as long as you’re the kind of gamer who likes to go back and get what they failed to do before, than this nifty little touch, is ideal for you and with that said, it’s time we moved straight on to the verdict!

Shu might not be what you would call a convention-breaking 2D platformer, or even the best one on Nintendo Switch, as the controls can be clunky at times and get in the way of the daring manoeuvres you will often strive and fail to pull off, but it is not a game you should easily pass up. The hand-drawn visuals are stunning, the soundtrack is both a treat for the imagination and ears and even though you can beat the initial game in just a couple of hours, you can easily triple the amount of time you put into it, just trying to collect each and every collectable Shu has to offer. Only, be sure to play in TV mode for the duration of your gaming as the screen and associated action can seem a little too small when playing undocked.