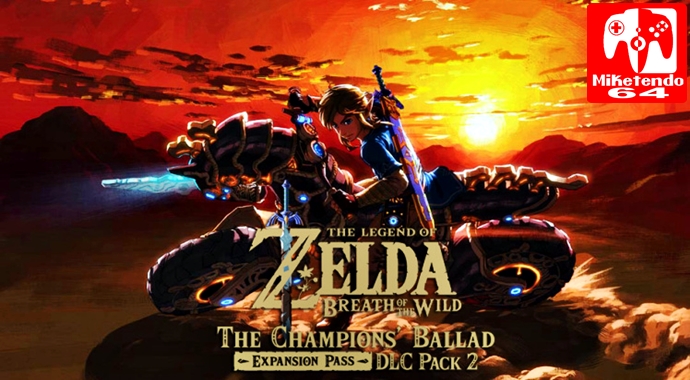 Last week, something truly incredible happened. The Legend of Zelda: Breath of the Wild beat Super Mario Odyssey for the title of Game of the Year at The Game Awards 2017 and at long last, the Champions’ Ballad finally arrived and we weren’t prepared for it.

With so little said about it, we were just expecting a new dungeon and added story like it was stated to have, but what we got, was something for more. We may not have been given a DLC campaign that let us actually play as each of the Champions, but we did get to learn more about them via the medium of 5 new cut-scenes, experiencing some of the challenges they had to face and read their diary. Yeah, it’s a bit convenient how all 4 of them just so happened to have a diary and that each diary are conveniently discovered once all 4 of the Divine Beasts dungeons have been completed, but just go with it.

Something quickly worth putting out is that Mipha’s diary is the best one to read. Not only does it show off just how much she cares for Link, with even her father going as far as saying how much he’s daughter had hoped to marry Link. There’s also a snippets about her jealously of Zelda after learning Link and her are to spend more time together. Even better than love and jealously though, are the new items of clothing that are now available (Phantom Ganon look anyone?) Granted you’ll need to venture all over to Hyrule to get them and make sure you have space as it isn’t actually possible to possess every piece of armour in Breath of the Wild. Should you find yourself with having no space, you will have to sell the clothes you don’t want to make space.

There’s also new horse gear such as an Ancient Bridle and Ancient Saddle that gives your horse of choice (expect Epona,) more spurs and the ability to summon it almost anywhere, as long as it is wearing the new gear, but the most important thing the DLC has to add, is the Master Cycle Zero. Once again, Link has been given the opportunity to swap horse power for two wheels and it is something else! Just being on that bike gives the game a whole new feel and another reason to do stupid stuff like some of the craziest stunts you can think of (I should know, I’ve spent hours just messing about on the bike and refuelling it with some of the materials I possess.)

Being the series Zelda fan that I am, it feels incredibly wrong to have a motorbike in a Zelda game, but then Breath of the Wild is not a conventional Zelda game. It is intended to be different and stand out from the previous games. I also then remember I love motorbikes with the Ducati Monster being my favourite and decide it’s time to jump off another mounter, purely because I can, or beat up a Guardian and then a Hinox with the bike, because it is actually possible to do.  The only thing is though, in order to get the bike, you will need to complete the Champion’s Ballad, which means you’ll need to return to the Shrine of Resurrection in the Great Plateau, clear out 4 enemy camps with the One-hit Obliterator and complete 4 new Shrines.

By no means is that the end of it, as you then have to go to four differebt locations, encounter Kass and embark on a new kind of adventure that has you trying to accomplish the same challenges the Champions had to beat, with 2 of the challenges require you to beat a new enemy previously unseen in Breath of the Wild. (Spoilers: They’re a bigger version of two specific enemies.) Then there’s even more Shrines of varying difficulty to progress through (a total of 16 new Shrines in all,) but you’ve even got to endure through boss battles you’ve done before against the various Blight Ganons.

Even if you dedicated the time to do all that, there’s still one last dungeon to beat (the Final Trials,) and while they start off easy enough, they can soon get worse, but while most of this does sound like a lot of what we’ve had to do in the game already, such as beating Shrines and Bosses, don’t forget the prize at the end of the ordeal, is the Master Cycle Zero and it is more than worth it. Also every time you win against the various bosses, equipped only with the gear you are given and powers you possess, you are also rewarded with improved versions of your abilities like Mipha’s Grace+ and there’s new story expanding cut-scenes! But if you need yet another reason to continue on this path, there is an entirely new boss battle as well. Should you solve the puzzles of the Final Trials, Link will find himself having to battle a monk, on a floating platform, high above Hyrule. The battle itself might not be all that epic, but the view sure is.

Now, having had to wait for so long for the DLC in the first place, it is easy to question whether all this has been worth the wait for and does it and everything Pack 1 The Master Trials, had to add offer, justify buying the Expansion Pass, but the fact of the matter is, it is definitely worth it. I hate the fact that even Zelda is not safe from the likes of DLC but the thing is, had the extra story and challenges the Champions’ Ballad been added in the main game, it would have ruined it. Breath of the Wild already has too many distractions and openness to explore to prolong the narrative, so extra quests and trials would not have helped at the time. Adding it all, after nearly everyone has had the chance to play it through, is near genius as it expands on what we knew by teaching us a lot more, but it also gives us a lot more content to. So suffice it to say, the way the DLC has been handled for Breath of the Wild is definitely the right way to do it, but if you are unsure, then maybe you should watch this.

This is just one of the reasons why #BreathoftheWild does deserve the title of Game of the Year. Its such a nice touch to end DLC Pack 2. pic.twitter.com/T0w7X4ZEbK

Having endured all the Champions’ Ballad DLC has to offer, this scene is the thing that nearly broke me, as it is the perfect way to end what has been one of the most incredible video games of this millennium and because I can feel my eyes welling up at the mere thought of the scene, it’s time I wrapped this Editorial up and did something mainly like another asinine stunt involving a certain motorcycle.

Tags: December Feature, Editorial, Nintendo Switch, The Legend Of Zelda, The Legend of Zelda: Breath of the Wild, Wii U


Categorised in: Breath of the Wild, Editorial, Nintendo Switch, The Legend Of Zelda, Wii U