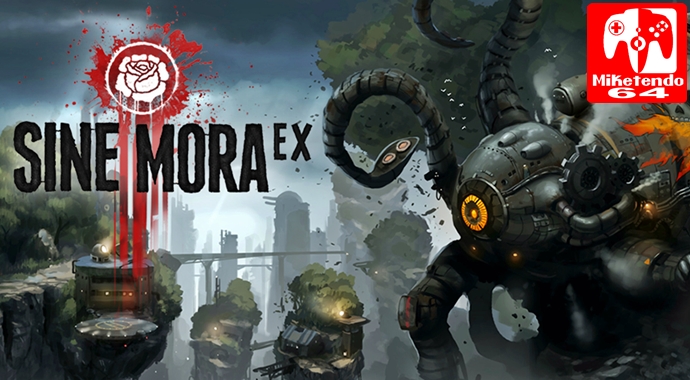 Sine Mora EX is a good, fine-looking arcade shoot ‘em up that uses interesting time control mechanics that sets it apart from some of its peers, but there isn’t much to the game beyond its brief campaign that makes it worth the £25 it will set you back.

Originally released back in 2012, Sine Mora EX is an updated port of Sine Mora that adds some questionable English voice-actors into the mix as well as the original (and superior) Hungarian original voiceover. Other improvements on the original Sine Mora include the story segments between levels becoming more clearly visible and improved graphics. New modes have been thrown into the mix, too. A “Challenge Mode” (which contains several difficult missions to take on), a “Versus Mode”, which gives two players (it can be played with a Joy-Con each), a rotating ship each and tasks you with either shooting at each other or race. These dull affairs won’t see much playtime at all. The largest addition to the game is being to play the entire campaign in co-op.

Again, the co-op mode can be played with one Joy-Con each, (the game employs simple controls) with player one controlling the aeroplane and another controlling a rotating ship (as seen in Versus Mode). The second player can help you out no end in some of the game’s trickier moments, using their free aim to destroy enemies from behind, coming from above and attacking from below. Your co-op buddy can help in other areas, too. In the game, your plane has three techniques: Shoot, Sub-Weapon and Time Capsule. Your co-op friend doesn’t have the luxury of a Sub-Weapon, but can shoot and use their own time-capsule – a shield that can prove very useful. Your little helper can also pick up any of the upgrade or point tokens that drop from downed enemies, giving player one all shot, sub-weapon ammo and time capsule upgrades, leaving you freer to blast and wave. Be careful though, as your help can also prove your hindrance.

Sine Mora EX doesn’t employ your typical health bar, instead, you are given a timer that refills when you destroy enemies and gets reduced when you take a hit (play in co-op and you have two targets that can reduce your time on the stage). If your timer reaches zero, you die, making you start the stage, or boss fight, from the beginning again. You can easily find yourself getting stuck behind enemies, constantly becoming the bullet-filled target over and over again, losing most of your shot upgrade tokens in the process, getting hit badly when trying desperately to get them back – you can’t kill anybody big with the piddly pea-shooter you’re loaded with at the start. Indeed, Sine Mora EX can prove a difficult game to beat. The screen can fill with multi-coloured bullets, enemy planes literally swoop in for the kill and even a massive, evil train attempts to kill you. Using your sub-weapons and time capsule moves at the right times can prove the difference between life and death.

You play the game as one of several edgy anthropomorphic animals attempting to stop gruesome plots of concentration camps, WMDs and even ethnic cleansing – Fox, Peppy, Falco and Slippy Toad fighting the evil Andross this is not. To make it a little more than just taking out the big bad, Sine Mora EX slips time travel mechanics into the mix – something your pilots can take control of via the time capsule. With a press and hold of the “ZR” or “SR” button you will deplete a big old blue bar in the top right corner of the screen, doing so lets you speed up your ship, which slows time down around you, allowing you to slip through bullets that otherwise you may smash into. In the campaign, this is the only time power you’ll receive, but if you play the “Arcade Mode” or “Boss Training” mode, you will be able to choose from reversing powers and a shield that reflects enemy bullets. In these modes you can also choose your pilot and colour of aeroplane, in all, there are 63 ways to play through each stage and boss. Each pilot does come with their own unique sub-weapon, but in reality, you’ll be playing through each stage repeatedly, with little to differentiate between attempts.

Thankfully, each stage is a load of fun, with interesting, varied locales to fight through. You’ll fly over the ocean, head underwater and shoot through tunnel systems filled with giant worms that damage you with their exploded guts. Sine Mora EX is a blast to play through and if you’re good enough at the game, you will be able to finish it in around an hour (you don’t have to play through it all at once, however). The best thing about the game though? The bosses. Each boss is a screen-filling menace. My favourite, Papa Carlo, looks like one of the fantastic contraptions of NieR: Automata. This giant robot shoots millions of bullets at you, attacks with a gigantic wrecking ball and circular saw. This is a helpful builder bot turned evil – most uncool. The spectacular bosses are a joy to face off against, even when they’re kicking your ass.

Unfortunately, the game’s storytelling isn’t quite as spectacular as the fast and frenetic, exciting gameplay. Sure, there’s a neat time travel hook in there to move the game beyond a simple “beat the bad guy” plot, but its delivery is a little messy and sadly focuses on being “mature” and dark rather than smart. It’s gritty, but overblown, with swearwords thrown in just for the sake of it – several lines are so bad, they’re hilarious. To be fair to it, though, arcade shoot ‘em ups such as this aren’t renowned for their storytelling prowess, so for the developers to try something a little different should be applauded –  no matter how messily it was delivered.

Sine Mora EX is a quality shoot ‘em up, but I don’t think I can really recommend it for £25. There’s simply not much to do outside of the main game that’s worth your while. Sure, there are 63 ways in which you can play through each stage and boss battle, but you won’t want to – not much changes between each play through. You’ll blast through its story mode in under two hours, appreciating the fine graphics, sound design and slick, fun gameplay, but the messy writing that focuses on foul language instead of plot at times is distracting. If you see the game on sale at some point, however, I’d pick it up – it is good.