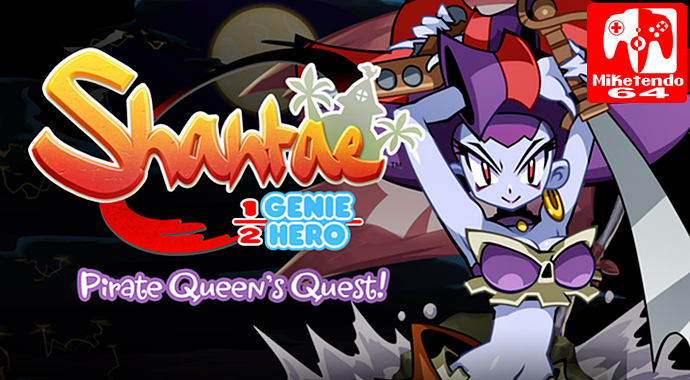 If you only know one thing about me, let it be this, I love the Shantae series. Each game is fantastic and I have a particular penchant for its latest instalment. (Let’s be honest, Shantae: Half-Genie Hero is awesome!) And now the game has gotten even bigger thanks to the arrival of the Pirate Queen’s Quest DLC!

To anyone who backed Shantae: Half-Genie Hero’s kickstarter campaign, the DLC is free, but to those who didn’t, it’s something that needs to be brought and because we have seen quite a few of our followers ask if the DLC is actually worth getting? Well, that’s precisely the question we’re going to be answering in this review!

So to properly get things underway, let’s start off with just what exactly is Pirate Queen’s Quest? The answer to that question is, although it is referred to as being DLC, Pirate’s Queen Quest looks, feels and plays like an Expansion Pack, as it adds a lot more content and features to the original content, in the form of a new campaign. I would have written game, as Pirate Queen’s Quest does have a story of its own, but it is no Shovel Knight: Spectre of Torment, so it would never hold up as a standalone title.

The reason I say that is because Pirate Queen’s Quest is limited in terms of content, due to the fact that its 6 playable levels are those from Shantae: Half-Genie Hero, with the exception of the Genie Realm areas (they do not appear in it.) It can also be easily 100% Completed easily in 2 and a half, to 3 hours, with speedrunners able to do it in less than 2, but that’s no reason to shame Pirate Queen’s Quest. Just because it is a re-imagining of the base game, with the same music and HD visuals, this extra campaign does vary in a number of ways.

For starters the Hub World is now a hub room, which is Risky Boot’s very own Captain Cabin. Only it doesn’t look as though she spends time sleeping in there, given the fact every time you see her in her own private quarters, she’s having a bath while 3 Tinkerbats watch. (As well as being deviants, one can be used to talk to for tips. One can be used to save your game and the other one you need to talk to, so as to access the world map, which is designed as a treasure map.)

As for the order in which to play, there is none. With the exception of the final level, which can only be accessed once all 15 Genie Crystals have been collected, the game’s 5 main levels can be played in any desire you wish to play them and should you reach the end of them, a Boss battle awaits you, only while new and old lesser enemies have been added, the bosses are those from the main game, so be prepared to fight the Giga Mermaid once again! There’s also new puzzles to solve, different endings, the occasional voice acted line by Christina Vee, who lends her voice to both Risky Boots and Shantae, and as previously mentioned, there’s a new story, so let’s tackle that!

The story of Pirate Queen’s Quest, is one that runs in parallel to the events half-way in of Shantae: Half-Genie Hero with a narrative, telling everything from Risky’s side. So while Shantae is dealing with her inner evil and being corrupted because of what Risky Boot’s has done with the Dynamo, the Queen of the Seven Seas, has taken the contraption for herself and now wishes to improve upon it. In order to do that, she needs 5 special components, which can be acquired via completing the 5 main levels, as well as 15 Genie Crystals. From that point on, it’s a race against time to collect all the parts, and teach some Barons who’s Boss!

Okay so maybe the story isn’t the best in the world, as it’s nowhere near as humorous as the one in the main game, but it’s still a labour of WayForward love and the gameplay is most excellent! The first Shantae game I ever played was Pirate’s Curse and with Risky being a pirate, the pirate gameplay is back. Risky has a sword for slicing, a gun for shooting that can fire all kinds of arsenal, as long as you have ammo and she can even use the Pirate Items! (Cannon Jump, Pirate Hat, and Grappling Hook to name a few.) Only in order to get the Pirate Weapons, you will need to complete each of the 5 levels, which is easily done if you played Shantae: Half-Genie Hero, as you’ll already be familiar with the level and before I go any further, another good thing about playing as Risky is that since she’s the bad guy, we don’t have to feel bad for all the enemies/monsters we kill!

Still there is quite the difference between her and Shantae’s movements, so there is a bit of an adjustment period, since she can perform a sliding dash, whereas Shantae can dash backwards and crawl, but while Shantae can only transform into animals via her magical dance moves, Risky Boots can summon Tinkerbats whenever she pleases and use them in battle/send them off to their doom. Just remember that Tinkerbats may be good for fighting half the enemies, but they are no true match for bosses, but having more of them fighting side by side gives them a fighting chance.

So it’s a good thing that while Risky can only send one off at a time in the beginning, but that can soon change as every one of Risky’s abilities can be upgraded via the use of Dark Magic, which is a collectible item, like Genie Crystals and can be found on every stage and there are 39 of them in total and they are worth hunting down! A fully upgraded Risky Boots is an over powered Risky Boots! Besides, it wouldn’t be a Shantae game if there wasn’t some degree of backtracking to it, only now when you backtrack, you can even pick certain “areas” to backtrack in, so if you’re sure you’ve cleared the first area, you can always just select the second one instead, which will save you a few a good couple of minutes if you do wish to beat the game in the fastest time possible and if you want to skip anything, than the ­+ button is your friend!

With regards to everything else, in game, it’s still classic WayForward Shantae gaming, as the puzzles are on the same level of those in Shantae: Half-Genie Hero, the new ways to explore previously enjoyed levels, is a refreshing take on a game that was originally released last year, giving it an unnecessary yet welcomed breath of life. So nice going WayForward, you’ve truly made my all-time favourite Shantae game even better!

If you love the Shantae games, especially Half-Genie Hero and did not back the game’s kickstarter campaign, the Pirate Queen’s Quest DLC is a must buy add on. It may not be large enough to be worth releasing as a standalone game, but it is a worthy addition to the Shantae series and does add to the Half-Genie Hero experience, regardless of what platform you play it on. Also it lets you play as Shantae’s arch-nemesis Risky Boots and that is pretty damn special in itself.