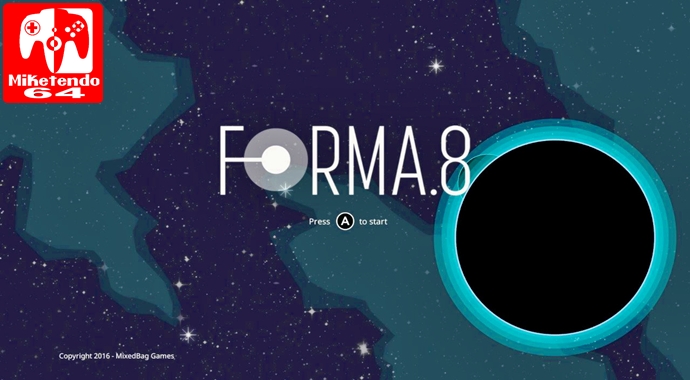 While utterly sublime graphics are not always expected of indie games, there are indie games that are designed in such a fantastic and tantalizing manner that it is hard not to fall in love with them the first time and see them and forma.8 is one such game that has that effect.

Developed and published by MixedBag, forma.8 is what has got to be one of the best looking indie games of all time. It’s made up of hand-drawn vector graphics and plenty of 3D elements that make its world feel real and life-like because of such a clean and vibrant look. But more than that though, it is a game without any text, so if you’re the kind of player who needs a narrative to urge you on, or a helpful comment to push you in the right direction, than be prepared to be awakened.

There are no aids with forma.8, there is only the world you see before you and a series of puzzles to be saved that really do have to be seen and tried, in order to figure out how to solve them, but we’ll go more in-depth with that in a moment. For now, let’s dive into the world and concept of forma.8 first.

forma.8 takes place in the distant future, a time that sees a small exploration probe forma.8 wind up being stranded alone o n a bizarre alien planet, due to an accidental event that separates him from his companions. Separated or not though, forma.8 wasn’t going to let his troubling circumstances stop from completing his assignment, finding and recovering a powerful energy source on the alien world it’s found itself on. Only nothing is as it seems as there is a terrible true to discover and once it becomes known, there is no unknowing it.

But reaching the truth, is a long journey as it will take just 5 hours from start to finish (almost twice that if you wish to explore every crook and cranny and collect every collectable the game possesses.) There’s also plenty of local flora and fauna that soon turns hostile when forma.8 comes in close proximity. Still while forma.8 might be helpless at first, he can soon turn up the heat thanks to the 10 power-ups he can acquire as the game progresses and they are a lot of fun when used in combination with one another. Why just send out a repulse like attack to lash out at those around you, when you can drop a bomb and repulse it in a direction of your choosing? And these aren’t not the only power-ups you can use in combination, but discovering those is half the fun, so I’m not going to spoil those for. (In this review anyway.)

Only it’s not just the occasional dead probe belonging to part of forma.8’s cluster that you’ll encounter as while the world in which forma.8 is set in, as in addition to huge open spaces that can take forever to explore earlier on in the game when the probe is without the power-up to move at a faster paced, there are rooms featuring timed passages, tight passages packed with enemies and some big old gnarly looking bosses, which will take you a good few minutes to figure out how to beat them.

However, while there is a lot going for this game, it is not without its issues. Although stated to run at 60 FPS, there were some instances I encountered where the frame-rate dropped exponentially and had some buggy boss battles. The worst thing however is the controls, as sometimes when flying the little drone, when you want to stop it completely, you actually have to pull back on the remote a bit, to ensure forma.8 doesn’t skid further than you would like, but they may be intentional. The good news however is faults or not, the faults are nowhere near enough to ruin what is a pretty sweet metroidvania.

forma.8 isn’t just yet another metroidvania kind of game, it is a phenomenally gorgeous metroidvania. Yes at times it can be a bit tedious exploring absolutely everything, but its fantastically colourful designed world that even now is just so unexpected of a game made by two people, is truly breath-taking. But it’s not just the graphics that make this game so good, its composed soundtrack, the inventive ideas at play and the feeling of accomplishment you get when you beat a boss and solve a puzzle. forma.8 isn’t just another indie game on Switch, it’s a positively enchanting game on Switch that is just so wonderful, it’s actually a bit of a sin if you don’t get it, so if you have the cash to spare, your next must have indie game has arrived!