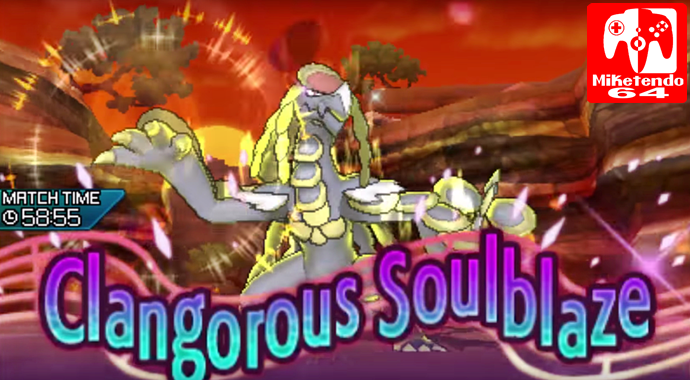 It was only a few hours ago that it was revealed the Ultra Gen 7 games would feature new Z-Moves and now the very first move has been revealed thanks to a video shown during the opening ceremony for the Pokémon World Championships, which we’ve got right here:

Only instead of just sharing the footage and spending a line or two telling you about what the Clangorous Soulblaze Z-Move does, we’re going to give you 2 whole paragraphs as the official website has been updated again and provided more details than most sites are currently giving you, so here it is:

If a Kommo-o knowing the move Clanging Scales is given a piece of the exclusive Z-Crystal Kommonium Z to hold, it will be able to use the Dragon-type Z-Move Clangorous Soulblaze.

Its additional effects are extremely powerful, raising the user’s Attack, Defense, Sp. Atk, Sp. Def, and Speed all by one stage. And this surprising move is the first Z-Move to be able to attack all opponents when battling against multiple Pokémon.

There’s also a new paragraph dedicated to the Z-Move using Pokémon, which we’ve got right here:

The Dragon and Fighting-type Pokémon Kommo-o definitely makes its presence known. When it spots enemies, it threatens them by jingling the scales on its tail. When it howls after finishing off its prey, the metallic sounds of its celebrating comrades can be heard from all around. Kommo-o is the only Pokémon that can learn Clanging Scales, a Dragon-type special attack with extremely high power that also lowers Kommo-o’s Defense after it uses it.

Now I don’t know about you, but Kommo-o was already a favourite of mine to use and now, he is even more so! But with Kommo-o being the first Pokémon revealed to have their own exclusive Z-Move, who do you want to be revealed next to have the same privilege? Let us know!