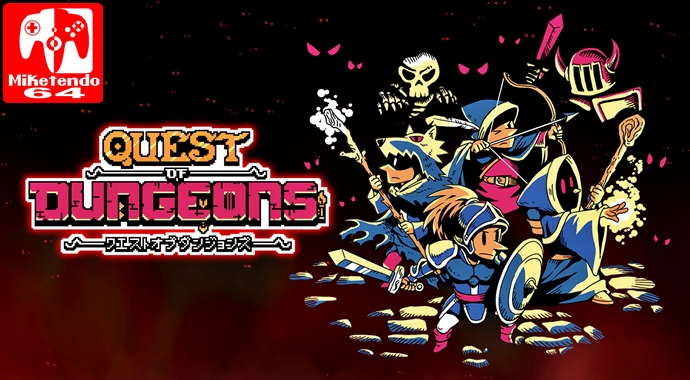 Quest of Dungeons: Releases on Switch Next Week in Japan and Comes West Later this Year

In a move almost no one saw coming, Upfall Studios’ Quest of Dungeons was revealed for the Nintendo Switch and it releases next week in the Japanese eShop.

Well, having established a relationship with Upfall Studios’ David Amador, when the news first broke, we got to ask him a few questions about the news and yes a Western release is happening, but it will take a little time. Still why settle for my comment on it, since we’ve got David’s responses right here:

How did the Switch port come about?

David Amador: It was a mix of fans asking me if I would do it with the interest that Flyhigh Works showed in publishing it for Switch after we partnered to release the game for Nintendo 3DS in Japan. After that I contacted Nintendo to get access and started development.

Does the Japanese release support English?

Will Quest of Dungeons be coming West and when?

David Amador: Yes, I’m now working to get the game released on EU/NA. I am nearly finished, but it still has to pass Lotchec. Hopefully it won’t be much longer.

Since speaking with David, he has posted a new blog post regarding today’s news and had a few other things to add, like the fact that Quest of Dungeons for Switch will feature new content, a new logo and the fact that it will cost $8.99 (same price for the Wii U and 3DS versions.) For the full comment on the new content, here’s David’s comment:

David Amador: Yes there are some new things, there’s a new Mansion, so you have a couple more different themes and sprites. Also a new Feats system to track Achievements, there are several other optimizations/tweaks/changes, but those are the main changes.

Just as soon as we have any new Quest of Dungeons news to share with you, share it will shall!