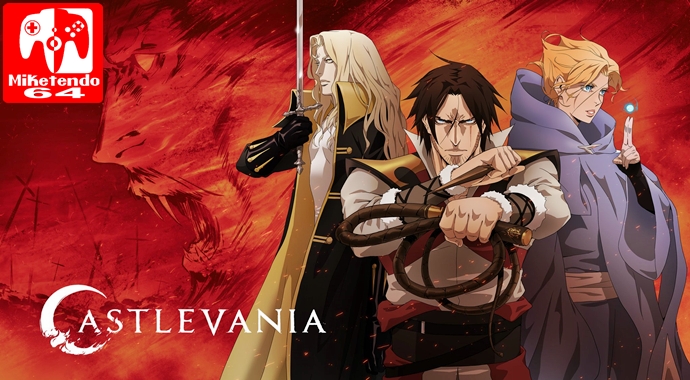 The Castlevania Netflix show is incredible, no word of a lie. If there was ever a time to get a Netflix subscription, it would be now. Adi Shankar’s animated series Castlevania sucks you in so much, the four short episodes leave you wanting so much more.

As you are probably aware, the series has got so much attention, that it has been granted a second season and will be eight episodes long, double that of the first series and will further develop on the story which is based on Castlevania III and will build on the relationships of Trevor Belmont, Sypha the Speaker & Alucard, son of Dracula.

The lucky folks over at Nintendo Life were fortunate to get a short interview with Adi Shankar, the producer of the Netflix show to ask him about Season 2 and what other games would he like to tackle next.

Nintendo Life: Thanks for taking the time to speak with us. To kick things off, do you have a message for the readers of Nintendo Life and Castlevania fans in general regarding the series?

Adi Shankar: First off, thank you! This show was made by fans for fans. I wasn’t going to mess up my own childhood and thank you for creating an ecosystem of fandom that has allowed this show could exist. I hope you guys keep supporting the show and spreading the word about it so that our audience grows and other fan made shows like this can exist.

How did Castlevania find its way into your hands, and how did you convince Netflix to take it?

I met Kevin Kolde in a chance encounter. He’s a great guy and was instrumental to every single aspect of this project. The plan initially was to go the Kickstarter route. I wasn’t sure how big the audience for Castlevania would be, but I knew I really wanted to see it made well and I hoped others felt the same way. Also, Bloodstained had done killer numbers on Kickstarter. I had assumed after releasing Power/Rangers and nearly going to war with Haim Saban – and then refusing to work on the official Power Rangers movie – I’d been ostracized from Hollywood, but I guess Netflix really liked what I was creating on YouTube and let us do our thing.

What’s it been like to work with Warren Ellis, who is something of a legend in comic book and literary circles?

If you look up the people I’ve cited as influences early in my career Warren Ellis was and always has been on that list. Eminem is also on that list as is Banksy, who inspired my fan film satire series “The Bootleg Universe.” I’ve had the opportunity to collaborate with several of my idols throughout my short career and it’s always been surreal. I guess the best thing I can say is that artists talk to each other in a very supportive way that transcends age and experience.

Was it hard to stay true to Ellis’ original vision for the show, which is very gritty and mature?

Would you consider yourself to be a fan of the Castlevania series?

Yes. That is why this was such an important project to me. Storytellers like myself are here to preserve our fandom culture and contribute to it so that future generations can enjoy and expand upon it. The harsh truth is the reason I quit the film industry and retreated to YouTube back in 2015 was because the major studios (except Marvel) blatantly didn’t respect fandom. They viewed us as “the pre-existing audience who would show up opening day regardless” and I didn’t want to participate in the massacre of my childhood.

It’s been confirmed that Netflix has taken a second series of eight episodes; is the script already in place and will this next season take us to the conclusion of Castlevania III’s narrative?

Yeah the scripts are done and they blow Season 1 out of the water. I’m not answering the rest of this… I don’t want to spoil it!

The show does a fantastic job of pulling in elements of other Castlevania titles – most notably Symphony of the Night, perhaps the most celebrated game in the franchise. Could we see a future series tackle the story of Richter Belmont and Alucard? Or do you think there are other parts of the Castlevania timeline that are ripe for adaptation?

Here’s what I love about Castlevania: to me it’s always been a story about multiple generations of a family. It’s a timeline that spans many many centuries. Making this show was a dream come true and I would love to keep making as many seasons of this as they’ll allow me to. As long as the fans keep watching the show and engaging in social media about it then the team and I will be able to tell a lot of Castlevania stories.

You’ve conformed you’re also working on an Assassin’s Creed series. What can you tell us about that in terms of setting, production team and cast? Has any of that been decided yet?

I am working on Assassin’s Creed. Lots has been decided but I’m not going to reveal any of it. It’s going to be dope.

What other video game series would you like to adapt?