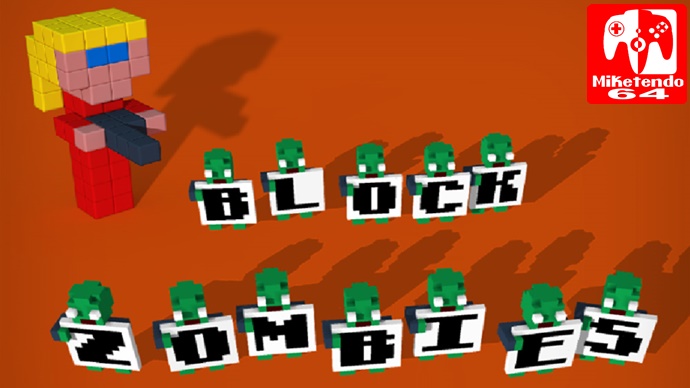 Hello All, I am back again with another review for the Wii U and this time it is Block Zombies by Nostalgic Software. You play a lone surivor in a zombie ridden world who is tasked to destroy strange crystals whilst taking out the zombie hordes, all within a Minecraft-esque setting. You will go from one end of the map to the other and then to somewhere else and so on and so forth so be sure to pick your battles because ammo is sparse and zombies are plenty.

You begin with a simple handgun which fortunately for you has unlimited ammo so there is no risk of running out of bullets but it does severly lack punch and will take a few clips before taking any zombies out until you upgrade it. There are other weapons to collect including a shotgun for clearing out hordes up close, an SMG which has a high fire rate but is only good if you can lure zombies down narrow passageways and then lay waste to them with concentrated fire. There is also the flamethrower and RPG to really get the party started and there are three different items that you can use to distract and make your escape with, these being a flare, grenade and mine. All of these are upgradable if you can find enough upgrade parts. These can then be used to increase things like fire rate, clip size and damage.

The game started out simple enough and ramps up in difficulty the further into the game you go with more enemies and their increasing resistance to bullets. The simple blocky aesthetic does make it feel like you are playing a Minecraft minigame clone but that isn’t necesarily a bad thing. Great graphics doesn’t make a great game, great gameplay on the other hand does and there in lies the problem with Block Zombies. The difficulty gets harder the longer you play but not insanely difficulty. The problem is challenges, objectives, the goals. You are tasked with the single notion to destroy crystals dotted around the map. “Destroy the crystal!” “Destroy the next crystal!” for the better part of 2 hours just going back and forth with only a change of scenery to spice the game up a bit, one moment you are in front of a farm house, next in a field, then in a town and afterwards a swamp. There is no real drive to keep the gamer engaged other than the hopes to finish the game so you don’t have to play it again.

The music for the game I did enjoy along with the sound effects and the blocky animations when the zombies explode. For everything else though, I can’t help but feel that Block Zombies severely lacks that something more to make it shine.

A simple enough game that gets extremely repetitive and offers no change of pace, I honestly think that your $4.99 would be better spent elsewhere. I really did want to like this game and I did enjoy it when I began playing it but as I progressed, the fun got sucked out quicker than the contents of a slurpee in the height of summer. The music is good and the limitations on weapons make you really depend on your skills to escape and conserve ammo but with little direction other than destroy the next crystal, there are better uses for your time, like clean your room, help you mum with chores take up knitting. So with that in mind, I will give this game a modest 5/10 for effort and concept if nothing else.