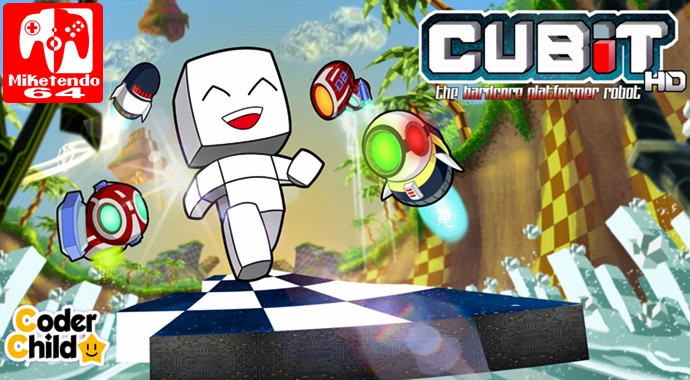 So, where should I begin with this review? Basically this is a runner game much like any other but with a difference, there are no shiny coins or tokens to follow, there are multiple platforms that can take you to different areas and one false move takes you right back to the start of the level. The plus side is that you have no lives to lose but you do have a death count which can rack up pretty quickly while playing.
You only have one task and it seems simple enough yet for some reason, it is actually the very reason that makes the game difficult and that is jumping. Your character automatically runs towards the right side of the screen and with jumping being the only mechanic the player controls, it is surprising how much skill is needed in just pressing a single button.

along with platforms of different calibres including single solid platforms and temporary platforms, there are enemies as well which you have to avoid as a single touch will end you and you will have to start at the beginning of the level again.

There are 6 levels in total but you only play through 3 in a single playthrough as you are given an option to choose between 2 levels that you want to progress through. Though 6 levels does seem a little short for a game, believe me when I say that it is a blessing because you will die on each level a LOT.

There are three endings to the game which will reward you with a new character to play as during your next playthrough. There are also 22 different challenges to work your way through like jump 12345 times, die 250 times, etc.

The music to the game is reminds me a lot of the Electrome stage in Mario Kart 8 (And MK8 Deluxe) and though it is constantly pumping, it doesn’t seem to aggravate the player but makes you more mentally engaged. The graphics to the game are really good, they are bright, they are colourful and most importantly, they are sharp.
Conclusion
It is hard to put into words, my thoughts about this game. It is really engaging and every time I mess up and die, I just want to try again. Cubit The Hardcore Robot HD is a time pit for sure. I sat to play it for an hour and before I knew it, two hours had passed and I was no closer to the end of the game as I was the beginning. That might be because I really suck at these kind of games but I still had this desire to overcome the obstacles that came before me. Super Mario Run is a fun game for casual players but this game really is hardcore to the point that the actual hard core mode will have you racking your brains as to how to make the seemingly impossible jumps.

Though the game is quite limited in regards to gameplay, controls & content, the price is very reasonable. In fact the only real drawback for this game I can find is that there is no Switch version as this game would fair so much better on Nintendo’s latest console as opposed the under appreciated Wii U. As regards to score, 7/10 is only fitting for a game of this calibre. Any less would be be an insult to the developer but I can’t bring myself to give it an 8 as it seems be just missing something. If Cubit The Hardcore Robot HD was to come to Switch, I may be swayed to go over my review again.