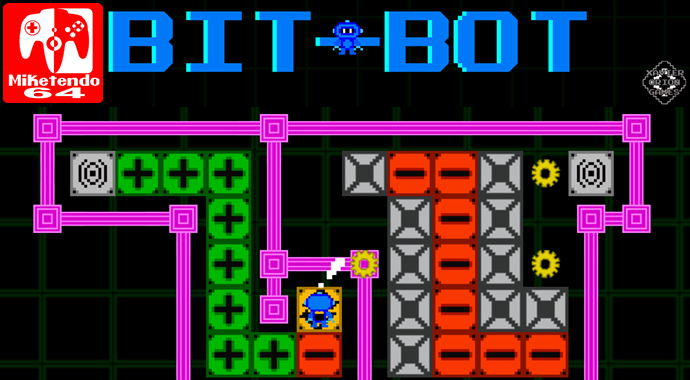 But wait there’s more, as previously revealed to us, should Xavier Orion Games be able to acquire a Switch dev kit, both it and Booty Diver would get the Switch treatment, only that’s neither here nor now. So let’s focus on what is and this is, is a complete rundown of the newly announced game that has been given to us by Xavier Orion Games, so please enjoy:

What is the title?:

The game is called Bit Bot.

What is the genre?:

You play as Bit a repair Bot. Bit is sent into a system main frame to repair that has been overrun by negativity spreading virus. This is represented by the Negative (orange tiles) in the levels. Your job is to repair the negativity by turning the tiles positive (green tiles).

(Story setup is very basic, just barely there to setup why you are doing what you are doing as with a lot of old school style games)

The basic premise is you go from level turning all the negative tiles to positive in a similar fashion to the tile flipping puzzles in Super Mario Galaxy/Super Mario 3D World. Once all the tiles are turned positive the exit becomes open.

If you step back over a positive tile it flips back to negative which makes you lose a bit of your score and some of your battery power. Which leads me to the next gameplay aspect.

You have a timer in the game like most old school NES style games that is represented by Bit’s battery power. You start the game with only 30 seconds of battery power. Just like stated before you have chances to lose extra battery power outside of it slowly draining, but you also have plenty of opportunities to regain battery power.

I’ll break it down a little bit here:

You can lose battery power by: 1) Turning a positive tile back to negative. 2) Running into the borders of the circuit you are currently on. 3) Plus, as it being your timer it slowly drains.

You can regain battery power by: 1) Successfully flipping 50 tiles to positive in a row (this is represented in the lower right hand corner) although flipping a tile back to negative breaks this chain. 2) Collect a battery power up. 3) Collecting gears that are spread out on a circuit not only give you a 1up after collecting 50, but they will also add a few seconds of battery power back as well. 3) Every successfully completed level adds a few seconds back to your battery power as well.

As you can tell you can really rack up your battery power, but if you are destroyed by running into an enemy or obstacle your battery will reset at 30 upon respawn. The game starts off with very simple puzzles then becomes more complex down the line with switches to rotate parts of the level, enemies moving around the level, warp panels, and much more.

Bit Bot was designed to be very simple in nature of control. You only have to worry about using the Control Pad to move around the levels and occasionally use the A button on context sensitive tiles (these are alerted to the player with an exclamation point appearing above Bit.)

How many levels are in the game?:

It is planned to have a 100 levels with 3 difficulty modes. I am wrapping up level creation this month.

Is it single player only?:

No the goal is to also include a battle mode that pits 2 players against each other across 10 different levels. All the tiles in this mode are neutral while each player represents either positivity or negativity try to turn as many tiles in the time limit to their side.

What inspired this game?:

Bit Bot was designed with the inspiration to make something very simple to play that my autistic 5 year old son could even grasp. I watch him play any video game with a controller including even my own Booty Diver and struggles to put together the concept of using both sides of the controller at the same time. He either just uses the Control Pad/Analog Stick to move in a game, but then doesn’t use the face buttons to either attack/jump while moving.

So therefore I designed Bit Bot with the focus being on moving around the level with only a few times you need to use the A Button.

As far as inspiration from another game I would have to say the tile flipping puzzles in Super Mario Galaxy/3D World. Was always surprised there was never a game with that kind of puzzle as the focus (at least none that I’m aware of especially on current hardware).

What controllers will it support?:

Just like Booty Diver it will support GamePad, Pro Controller, and Classic Controller. Although with it being so simple in nature I may look into a Wii Remote only control scheme as well so it can be literally played one handed.

How much will Bit Bot cost?:

Considering it is smaller in scale to Booty Diver it will be priced accordingly at $4.99. I am also considering a loyalty discount to Booty Diver owners that would put it at $2.49 for them, but that’s if Nintendo lets me do it.

How long has Bit Bot been in development?:

I started Bit Bot at the beginning of the year while waiting on Booty Diver to clear lotcheck and be released. It was one of the 3 prototypes I started at that point. I was bouncing between all 3 fleshing them out then Bit Bot just really took off when it was still called Project Flippo.

When do you plan to release Bit Bot on the Wii U eshop?:

Will it be a Wii U exclusive?:

I would be crazy at this point to say yes and that certainly is not the plan. It’s planned to be released on Android as well as Steam. The Steam release will depend on when Valve finalizes its Steam Direct program. The Android port will be last. I’m also looking into an Xbox One port via their Creators Program that they announced a few months back.

So depending on when Steam Direct hits the game could be at the very least a “timed” Wii U exclusive much in the same way that Booty Diver is only exclusive to Wii U for the time being.

Will this be your last Wii U title?:

Well that depends. Obviously the Wii U is dying yet it’s in a weird place in the market considering hungry indies can’t get on Switch yet along with the fact that Steam Greenlight is a mess so until Steam Direct hits that’s not really an option. Microsoft opened its doors more, but only with their Creators Program which doesn’t give you all the Xbox Live perks that you get from ID@Xbox. Then lastly a garage band indie dev like myself doesn’t really stand a chance getting into the fortress known as PlayStation yet at least not without help.

So right now Wii U is the best place I feel to at least get somewhat of an audience and get your title out there. Although for me considering that Bit Bot won’t hit the eShop until this Fall that means my next 2 games won’t hit ANY market until 2018. With that in mind I only know of one tile that is planned for Wii U as a 2018 release (Battle Princess Madelyn) so the prospect of anymore Xavier Orion Games titles being on Wii U after Bit Bot depends on several factors. Will an audience still even be there to bother which will be shown by the continued sales of Booty Diver going forward as well as Bit Bot’s sales. Next would be if Nintendo will still be accepting new submissions for Wii U titles at that point.

And just in case all of the above is not enough to float your boat, then how about this, a 5 level long PC demo for Bit Bot can be accessed clicking here, or you can carrying on scrolling down and see the newly posted trailer pertaining to the just announced title, followed by a photo of the official press release:

For more Bit Bot news, you can stay up to date by following @XavierOrionGame on Twitter, checking out their website by clicking here and then bookmarking the page it takes you to, or just follow us as we’ll be sharing more Bit Bot news for Wii U in the coming weeks/months.