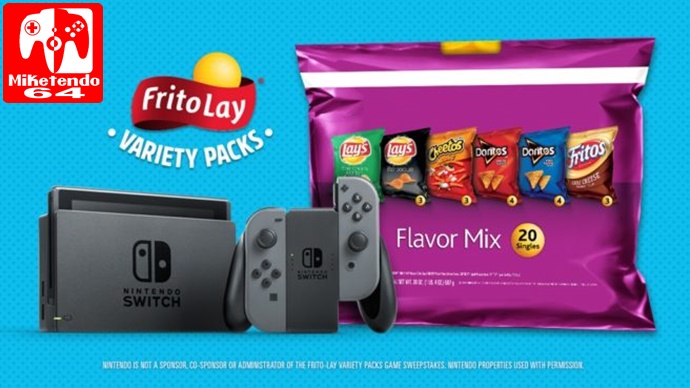 [US] Win A Nintendo Switch With Frito-Lays Variety Packs

Are you wanting to get your hands on a Nintendo Switch but jut can’t seem to find them anywhere? Would you eat you own weight in chips for a chance to win one? Well good news because if you live in the US, you can do just that. Nintendo is teaming up with Fritos for a big Switch promotion which, for the next six weeks, Frito-Lay will be giving away a Nintendo Switch with a game every single hour. Be sure to look out for specially marked Frito-Lay Variety Packs that contain information about how U.S. residents can enter for a chance to win.

This is what Doug Bowser, Nintendo of America’s Senior Vice President of Sales and Marketing, had to say about the new promotion:

“Nintendo Switch sprung out of the gate as the fastest-selling Nintendo home system in history. It’s no secret that snacks and video games have always gone together, and this is a great chance for people to get their hands on a Nintendo Switch and a game.”

The Variety Packs sell nationwide at retail stores for $3.60 – $8.99. You can also check out the official site if you would like more information.