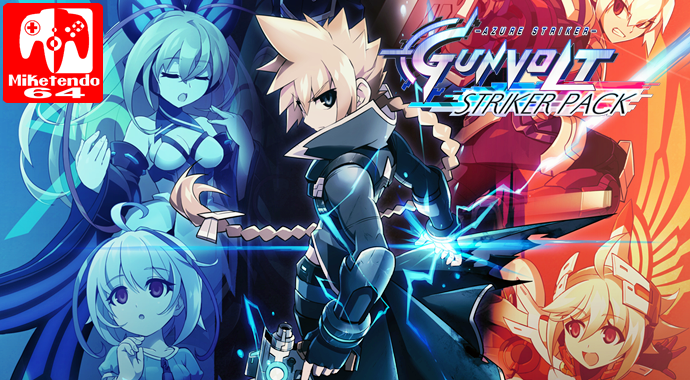 Earlier this month, Inti Creates divulged they would be revealing 2 new games for the Nintendo Switch during BitSummit and while one was already ousted, the other was not. (Not to the public anyway.)

Hours ahead of Inti’s presence at BitSummit, a press kit was sent out to various news outlets and as I found myself reading through all the details, I was simply delighted. I had hoped Azure Striker Gunvolt: Striker Pack would come to the Nintendo Switch and later on this year, it does exactly that and now that the embargo has lifted, here is everything you need to know about the latest “game” to be revealed for the Nintendo Switch.

As of right now there, Inti Creates has yet to establish a definite price for the game, but with the Striker Pack not seeing a release until the end of August, there will be plenty of time to learn about it in the meantime.

Now Azure Striker Gunvolt: Striker Pack wasn’t the only Switch game shown off as Mighty Gunvolt Burst was also properly revealed for 3DS and Switch and nor was it the only game we got a press kit for, but instead of covering them both in a single article, we’re covering both games in a separate article to call their own, so while we are wrapping up our Azure Striker Gunvolt: Striker Pack coverage, please enjoy this selection of photos and other imagery related to the newly announced Switch port:

And remember, if you want more Inti Creates Switch news, we’ve got it, just in another post, so be sure to check it out!