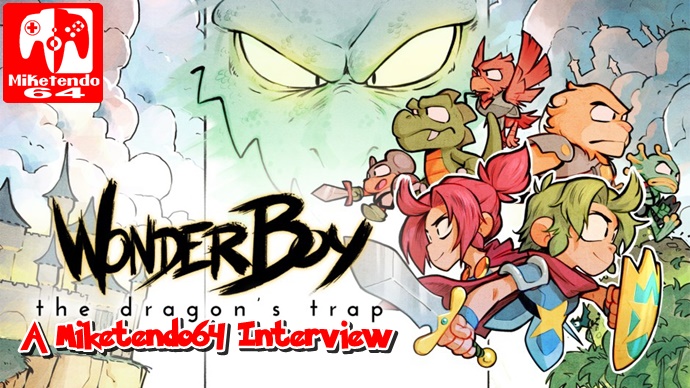 I have an omission I need to get off my chest and it is this, I have never played a single Wonder Boy game. In fact I have even yet to play the Switch version and that is a great shame. But because I was eager to know more about the title, I was fortunate enough to send some questions over to LizardCube. Granted I never got the answers back until after the game released, but that is neither here nor now as they answers were worth it and I am sharing them right now:

In typical interview fashion. Would you mind introducing yourselves to our readers and telling us about your roles as far Wonder Boy and the Dragon’s Trap is concerned?

Ben Fiquet: Hi, my name is Ben Fiquet. I’m the art director and co-founder of Lizardcube. I’ve been working for animation, video games and comics for 10 years. I’m responsible for all the visuals you see in the game.

Omar Cornut: Hi! I am Omar Cornut, the technical director and co-founder of Lizardcube. I’ve been making games for 15 years. Past work include Tearaway (Vita), Pixeljunk Shooter (PS3) or Soul Bubbles (DS). The rest of the team include: Michael Geyre who did the music, Romain Gauthier who did the audio design, and Sebastien Ronsse who helped with the programming.

Thank you both, and now with the introduction out of the way, we can properly commence with the interview.

Wonder Boy and the Dragon’s Trap in a Nutshell:

Miketendo64: For our readers out there who have no clue as to what Wonder Boy and the Dragon’s Trap is, would you be so kind as to clue us all in?

Omar Cornut: The Dragon’s Trap is retro styled action-adventure game, where you character Wonder Boy gets cursed and transformed into different animal characters. You get to play them and their abilities allow you to explore more of the game world. I would say it is something in between the old Metroid and Zelda games in term of general feeling.

The Past is Alive With the Dragon’s Trap:

Miketendo64: Given the fact that Wonder Boy is a revival of the 1989 version games, how much of the original game (scenarios, story, features, etc.) still present in this newer and more modern version of Wonder Boy?

Omar Cornut: Almost everything of the original game is still there. This is designed to be a faithful modernized version of The Dragon’s Trap. We also have some new things such as the difficulty modes and extra secrets.

Miketendo64: Developing games is never easy, regardless of how much, or how little experience you have, so what has been your highs and lows during the development of Wonder Boy?

Ben Fiquet: I’m personally not a professional game artist. I’ve spent very little time in the industry, but working with our own engine that Omar crafted, it was actually easier for me. I asked him to implement this or that fitting my way of working.

The good thing has been to be able to craft the game as I wanted to see it, but in the same time, being the only artist meant I had a lot of assets to produce.

Some licensing questions scared us at some points, and we were very afraid not being able to do it.

Omar Cornut: There’s always points of low during the project. Of course the licensing was uncertain for a while and we had like 40% of the game done before everything was completely signed and secured. So that was a worry! The hardest part is to keep the stamina with doing everything that the game needs. A game is the sum of many thousands of choices and actions. When we reache the end of the project it’s easy to be tired and sometimes give up with fixing some small things. But I tried to not give up and fight all of the fights. The final few months of a project can make an enormous difference in quality.

Miketendo64: There is no way you’d go to such efforts to just recreate a game such as Wonder Boy: The Dragon’s Trap without having played the original games yourself, so do you have a favourite Wonder Boy game?

Ben Fiquet: My favourite is Wonder Boy in Monster Land. This was the second game I got after Alex Kidd and I spent hundreds of hours playing it. There’s a real simplicity in this game, in a very good way.

Miketendo64: With 6 different transformations available, which one is your favourite?

Ben Fiquet: Ben: I like Hawk-Man. He’s cool and has the power of flight. That do anything for ya? That’s levitation, holmes.

The Story of Switch:

Miketendo64: Since you’ve been vague about it in the past, can you tell us about your secret meeting with Nintendo in the Mushroom Kingdom?

Ben Fiquet: Just after Nintendo announced officially the Switch, they invited us to come and see the device in their office in Germany. They were really open and interested to have Wonder Boy for the console. We obviously couldn’t pass the opportunity and managed to have the game working on it in no time.

Miketendo64: Can we talk about the Pirate Dragon for a moment? I know there is a Meka-Dragon, a Zombie Dragon and even a Samurai Dragon, but why is there a Pirate Dragon in the game and can you tell me everything about him? (If you couldn’t tell, I’m a fan of both dragons and pirates, so to have both fused into one, I’ve got to know more about Captain Dragon.)

Omar Cornut: Haha! You’d have to ask the original creator. But I think the game was created around the idea of those 6 playable characters and their abilities. And Piranha-Man can swim and reach underwater areas and that is why they added a sunken ship there. And who better than a pirate can be the boss of a sunken ship?

Miketendo64: That is a very good point!

Miketendo64: Interestingly enough, Wonder Boy won’t be the only Boy title coming to the Switch as Monster Boy, which is inspired by Wonder Boy, is also on its way. How do you think both titles will fair in terms of sales, when they will face completion against one another?

Ben Fiquet: I think there’s a place for both games. They are fundamentally different but gamers waited almost 30 years to have the license come back, I think they’ll want to play as much as they can.

Concerning sales, it’s not comparable. We benefit from the fact that our game is the official license and nostalgia’s gonna play a big part. I hope they do alright though.

Omar Cornut: I think Monster Boy will feel like a more modern game and because of that it may reach a bigger audience of younger players, too!

Miketendo64: On the subject of your publisher, what made you go with DotEmu as opposed to FDG Entertainment, who are publishing Monster Boy and how are you finding working alongside DotEmu?

Ben Fiquet: DotEmu have been really enthusiastic from the very beginning. I think we’re very much on the same page and we couldn’t have hoped for a better match.

Miketendo64: Are there any plans for a retail release for Switch and would you and your publisher consider partnering up with FDG Entertainment to create a packaged deal that saw both your upcoming Boy titles released as a two-in-one retail game?

Ben Fiquet: Well, it’s way too early to tell, let’s just wait for Monster Boy to come out first. But cross promotion is interesting in terms of marketing.

Omar Cornut: We would like to do a physical release of the game but it is a little complicated for Switch, so I think it will take some time to make it happen, if we can make it happen.

Miketendo64: And because there’s always time for a final question, is there anything you would like to say to your fans?

Ben Fiquet: I hope you’ll like Wonder Boy: The Dragon’s Trap and that you’ll want to see more and more games traditionally animated. We had a blast reviving that wonderful game, I wish you see all the love and care we’ve put into it.

Omar Cornut: If you want to follow our news, you can find out on Facebook/TheDragonsTrap or Twitter. (@lizardcube and @dotemu)

To Ben and Omar, I thank you both for our time and want you both to know I fully intend to go hands on with Wonder Boy as soon as I can, as I do truly enjoy everything I have seen from all the videos and photos of the game shared since its release and wish you both the best of luck with your future endeavours!