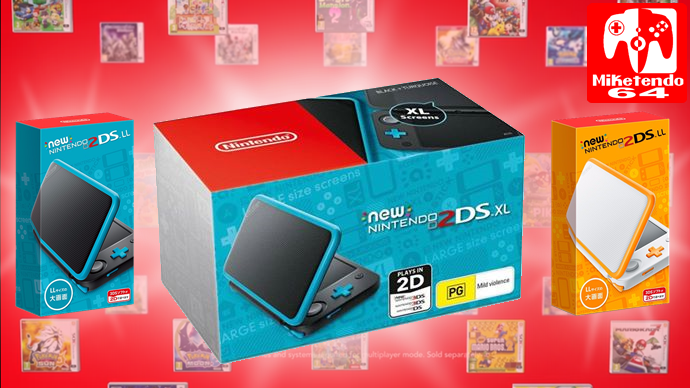 Nintendo have just released a document filled with goodies about upcoming games and titles and what maybe encouraging to know is that they are not dropping the Nintendo 3DS family of systems just yet as they will be bringing a New Nintendo 2DS XL handheld to the world on July 28th in most regions. It will not have the same look as the original 2DS (Thank heavens) and will look more like the 3DS model but without the 3D mechanic.

It is to be a more cost effective way to entice more people new to gaming and children but still has the processing power of the New 3DS.  It currently comes in two colours, White & Orange and Black & Turquoise. Some regions may only have a particular colour schemes (For example, the US will only have the Black & Turquoise model).

Whilst on the Subject of the New Nintendo 2DS XL , Nintendo President Tatsumi Kimishima stated the following during the Financial Results Briefing For Fiscal Year Ending March 2017:

The New Nintendo 2DS XL will launch in Japan, the U.S. and Europe in July. In Japan, it will have a manufacturer suggested retail price of 14,980 yen (tax not included). In the U.S., the MSRP will be $149.99. As a reference, the MSRP for the current New Nintendo 3DS XL is 18,800 yen (tax not included) in Japan, while it is $199.99 in the U.S. We can say that the New Nintendo 2DS XL will be offered at a more affordable price. It broadens the options available to consumers, whether they are looking for their first handheld system, or want to add a second or third handheld system for the family.

Note 1: MSRP = Manufacturer’s Suggested Retail Price
Note 2: Black x Turquoise will be the only color available in the U.S.”