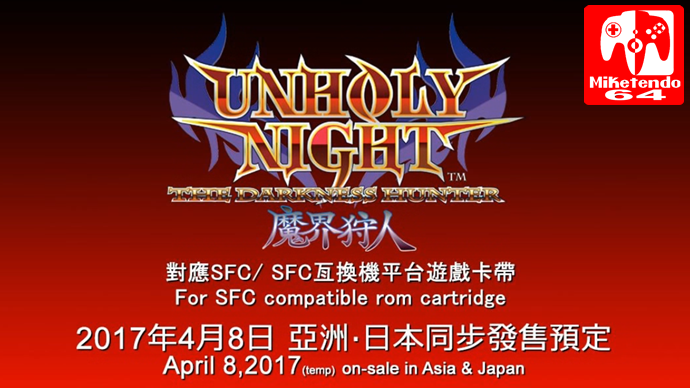 (Random) The SNES To Receive A New Game, Unholy Night: The Darkness Hunter

The Super Nintendo Entertainment System first released over 26 years ago and has since been surpassed by many generations of game consoles since. However it seems that the SNES May be able to come out of retirement (or at least out of the dusty cardboard box it may be kept in) as a new game is coming to it called Unholy Night: The Darkness Hunter and is expected to see release later this year.

Unholy Night: The Darkness Hunter is a 2D beat-em-up created by former staff members of SNK. The game features Story, Versus , Survival, & Practice Modes and allows up to two people to play at the same time.

Unholy Night: The Darkness Hunter is currently up for pre-order on Amazon US and costs $49.99. If you are interested you can check it out via this link.  At this moment, the SNES title is listed with a release date of 19th June. It is not certain whether it is just a placeholder date or the actual release date. but either way, you can expect it to come out this year.

*Update: The game is already out in Japan since April 8th. Thank you Paul Dobson for the tip!