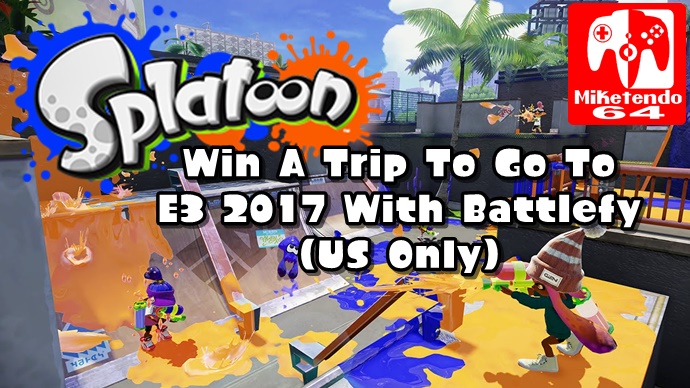 Win A Trip To E3 2017 By Playing Battlefy’s Splatoon Tournament! (US Residents Only)

If you are over 18, live in the US, own a copy of Splatoon and a Wii U with internet connection, you and 3 of your friends could win a trip to go to E3 2017. Battlefy are hosting an online Splatoon tournament and if you meet all the criteria above and have the skills to go head to head with some pretty tough competion, you could be be going to E3 2017 and see what Nintendo has in store at the Expo (along with the  other Game companies and Developers that will also be there)

This is What Nintendo have stated about the Tournament:

“The qualifying round (Turf War) is on April 22 at 11 a.m. PT, but make sure to log in early and click the ‘Check In’ button an hour before tournament time. Once the bracket is seeded, you can set up your qualifying match using Battlefy’s Private Match Chat and then proceed to splat your way to hopeful victory. The top 16 teams in the qualifying round will then move on to the finals. In the finals, teams will play Turf War, Splat Zones and Tower Control in succession in single-elimination best-of-five play until only two teams remain. The Grand Finals will see the final two teams doing battle in Rainmaker mode to determine the winner. The finals will begin on April 29 at 11 a.m. PT.”

You will need to register your team (along with an optional back-up) if you would like to take part in the competion. you can use the following link here.


Categorised in: Nintendo, Splatoon, Wii U