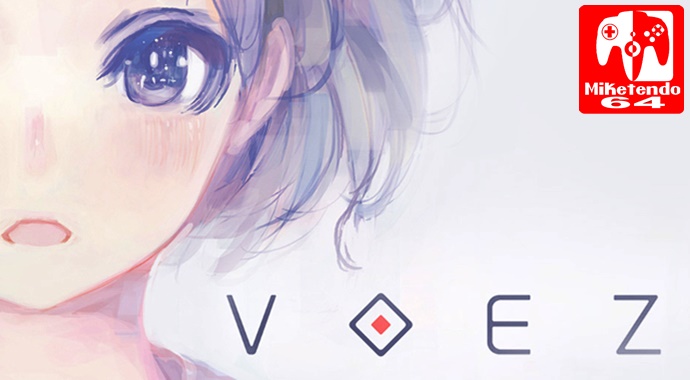 [Review] Hitting all the Right Notes with VOEZ

Initially released on mobile devices last year and developed by Rayark Games, VOEZ was the rhythm game players couldn’t get enough of, when they weren’t complaining about the fact you had to be online to play the title. Only now it’s no longer just playable on android and iOS devices, as it’s now playable on the Nintendo Switch and can only be played when in handheld mode. The reason why it can only be played in handheld mode, is because VOEZ on Nintendo Switch is still very much so a game that massively relies on touch controls, so leaving it in the dock in the hopes of experiencing it on the big screen, isn’t going to work out as you would like, since you’ve literally got to put your fingers all over the touchscreen to properly play the game.

Since it is a “Rhythm” game, the same rules apply that come with almost every rhythm game available in today’s market. The gameplay is simple and there is a black line near the bottom of the screen. Notes, which for the most part appear as diamond shaped objects, will rain down from the top of the screen and be dealt in the manner that applies to their shape. (Some merely need to be taped, some need to be held, and some require swiping and sliding. Slide notes are small round.) As usual, timing is everything because if you act too soon or too late, you can miss the note entirely, which will result your combo. Whereas acting right on time could see you landing an all-important “Max Perfect,” which goes a long way in helping players rack up the points. But that’s not all.

In one way VOEZ differs to most rhythm games, is the fact that the note lines (what the notes fall down in their pursuit of reaching the black line and beyond,) can actually move. In fact they don’t just move, they dance. Reacting to the very song you are playing along with/listening too and since the game features of 100 songs, playable on 3 different modes (Easy, Hard and Special), which consists of trance, electronic and even pop music, the note lanes dance can and does vary. On some levels, it varies so much, that it can often be distracting, but not to worry. If you mess up too badly, you can always finish the level and play it again, or just retry halfway through. After all, getting a good score is a must if you wish to advance in this game, by learning more about its story.

As far as the actual story goes, set in the town “Lan Kong Town,” which is modelled after Yilan in Taiwan, it tells the tale 6 high school students (Sasaki Yuko, Chelsea, Lance, Ocean, Jessy and Qian Qian), who form a band they name VOEZ, and eventually obtain international frame. Only while there is a story in place, the story needs to be unlocked as it is revealed step by step by completing challenges given by the in-game diary and there are 76 diary entries in total requires unlocking, All entries can only be unlocked in succession, so even if you met the requirements to unlock entries 3, 4, 5, and 6, they will remain locked until you meet the requirement for entry no.2. As for the requirements themselves, they go from wanting you to obtain a B rank or higher on one EASY mode level, to having acquired a total of 3 million points, to completing 1 song in Special mode with a minimum of a B rank and if you think that’s bad it soon gets worse and quickly.

As for how to get certain ranks that’s rather simple. Should you score anything less than 780,000 points, you will instantly get a C rank upon level completion. To get a B rank you will need to get more than 780,000, or you could really outdo yourself and get 880,000 for an A rank or surpass 950,000 for S rank and even if you S rank every level on Easy Mode, there’s still a Hard and Special mode for you to try your hand at. But should the songs/levels prove too much for you, you can always adjust just how fast or slow you would like the notes to fall in the hopes of going for a Full Combo or even All Perfect on some of your more favourite to play songs.

Nevertheless, just in case you require a reason to do your utmost best on each level to meet the challenges in place, (other than to learn more about the characters the game is about, who are easy to forget about if you don’t make a habit of checking out the journal entries), then how’s this for a reason? Meeting the challenges enable you to earn Keys that can then be used to unlock Icons (three Icons per every Key used) and there are 264 in all to collect. (Just bear in mind it is possible to get Icons you have already received and while there are a lot that aren’t rare, there are still quite a few interesting Special Rare ones to get.) Although the icons really don’t do anything except give you plenty of options as to choose from, when wanting to use a different icon for every day of the month!

With some notable differences between it and the original mobile game version, (differences such as not needing to be online all the time to play it and the fact that the Switch version requires no additional purchases. Meaning when you buy the game and complete the first song, you get full access to the complete game), VOEZ has come a long way from the game we knew it to be when it first released last year. Sure the music at times can get quite repetitive, with the gameplay especially getting repetitive, VOEZ is still a stunningly looking game with a beauty that is to seen and enjoyed and some easy to use and sleek menus. Is it the best rhythm game in the world? Probably not, but it is one of the more enjoyable ones that is heavily enjoyable when playing with headphones plugged. So in light of all that, I think it’s fair to say VOEZ deserves no less than a 7/10 and should you wish to try it out yourself you can, as it is available now straight from the eShop!