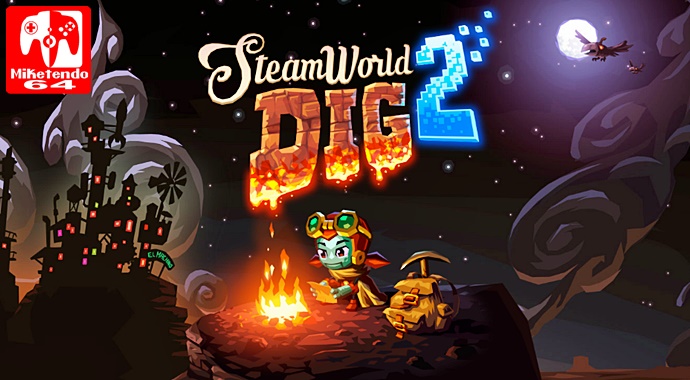 The cat is out of the bag and there is no putting it back in, SteamWorld Dig 2 exists and it’s coming to the Switch and while most articles on the internet would lead you to believe you have heard everything there is to know about it right now, they’re wrong!

Not only has Julius Guldbog updated the Image & Form Games blog with an insightful Q&A, but there is a new episode of The Engine Room: SteamWorld Insider and it is a tell-all on the truth behind SteamWorld Quest, but let’s start with the Q&A shall we?

When exactly will SteamWorld Dig 2 be released?

You can expect to play SteamWorld Dig 2 sometime this summer. For which platforms will it be released? SteamWorld Dig 2 will debut on Nintendo Switch. Stay tuned for more platform announcements in the near future. We’re exploring the possibilities of a multiplatform release on day one. Stay tuned!

There’s a really fun connection between SteamWorld Quest/SteamWorld Project 2017 and SteamWorld Dig 2. Get the full story behind it in the latest Engine Room episode on YouTube.

Will the sequel be longer than the original SteamWorld Dig?

Sure thing! It’s a meaty exploration platformer with a wide variety of upgrades and worlds to discover. Expect a vivid underworld in which you’ll encounter all kinds of enemies, treasures and traps. We’ll reveal more details in the coming months!

We have not forgotten about Rusty. He’s very important to the events unfolding in SteamWorld Dig 2. We don’t want to spoil anything this early, but rest assured knowing he’s present in the game.

Now what’s this about the truth behind SteamWorld Quest? Well, since I actually want you to watch the video, I’ll give a brief response. It was Image & Form’s way of ensuring the true name would not be leaked, when details of them seeking official funding from the EU came to light. A herring meant to get us looking in another direction and yet an appropriate name nonetheless and now here’s the video:

Given just how much I love the SteamWorld games, despite only first experiencing them last year, I have already put in a request for an interview regarding the title and have sent off a ton of questions, so if everything goes as it should, we’ll have plenty more SteamWorld Dig 2 news to share with all of you. So until then, happy #SwitchWeek everyone!