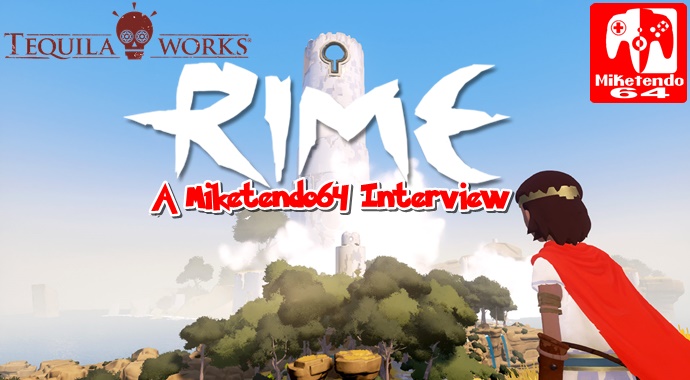 [Interview] A Boy, An Island and a Female Fox (RiME)

With the help of Tantalus Media, RiME is coming to the Nintendo Switch. We don’t know when it will be. We don’t know if there will be a retail release, but we do know how to get in touch with them, so last month, we did just that in the hopes of landing an interview. Because of IGN’s exclusive coverage of the title in January, we were unable to do so, but we were able to arrange something for this month instead and having spoken to them, we’ve now got plenty of answers for you to sync your teeth into. Join us as we hear from Tequila Work’s Raúl Rubio:

Hi Raúl, thank you for taking the time to do this. In typical interview fashion, would you mind introducing yourself to our readers?

Raúl Rubio: My name is Raúl Rubio and I’m the CEO & Creative Director at Tequila Works.

Thank you Raúl, and now with the introduction out of the way, we can begin the interview.

RiME in a Nut Shell:

Miketendo64: Now you’re currently developing RiME for a number of consoles, but just what exactly is RiME and when did development on it first begin?

Raúl Rubio: RiME is an adventure about discovery, experienced through the eyes of a young boy shipwrecked on a mysterious island strewn with ancient secrets to discover. We started developing RiME in early 2013.

RiME and The Sexy Brutale:

Miketendo64: But RiME isn’t the only game you’re currently working on, as Tequila Works are also developing The Sexy Brutale, which is also to release this year. How have you found it developing the two games at the same time?

Raúl Rubio: It has been a really interesting experience, but the process has been really smooth since the people involved in the development of RiME and The Sexy Brutale have been different teams. The Sexy Brutale is a coproduction with Cavalier Game Studios, and here at Tequila Works we took care of the art and visual style of the game, as well as Production. We have learnt a good deal about project management in the last couple of years!

There are no Currently no Switch Release Plans for The Sexy Brutale:

Miketendo64: Is there any chance of Nintendo gamers seeing a Tequila Works double and have The Sexy Brutale also release on Switch?

Raúl Rubio: You can never say never, but currently we have no short term plans to release The Sexy Brutale on Switch.

Miketendo64: And back to RiME, a game about a fox, and a boy trying to escape an island and a curse. As far as content goes, just how big is the game? Something large enough for fans to sink their teeth into, or something they can blast through in 10 hours or less?

Raúl Rubio: RiME is a game about curiosity and adventure, and thus has a lot of weight. Obviously depends on how you play but there are lots of rewards – not only collectibles – as reward for that curiosity. If you are asking for cold numbers, it is around 8-10 hours for the average person to complete their first playthough, though depending on your exact playstyle and desire to explore, it could take a couple hours fewer or a couple hours more.

A Game with Combat, but Lots of Puzzles:

Miketendo64: Well given how it is a game packed with puzzles, let’s talk about them shall we?

Raúl Rubio: As you know, since our protagonist is an 8 year old kid, there is no combat in RiME. That meant that we needed to add physicality to our puzzles, in order to give the main character a solid presence in the island.

Most puzzles involve physical actions like jumping, climbing, swimming/diving, carrying/throwing stuff, push & pull… while others are more surrealistic and exotic: after all, you can manipulate things with sound, mechanics based on light and shadow, you can manipulate time, play with perspective…

The Collectibles are Essential to Getting the Full Grasp of the Game’s Backstory:

Miketendo64: Since there are trophies, collectibles and achievements, any chance of a spoiler? What is something we can collect? And what is a fun achievement to do?

Raúl Rubio: We will keep this spoiler-free I’m afraid. But we can assure you that collectibles aren’t placed in the game without a meaning. Finding them rewards you with a better, more profound understanding about the background story of the game.

Fail to Uncover Everything in your First Playthrough, you Can always try again in your Second One:

Miketendo64: Since RiME is not a sandbox game, how do you feel this will affect fan interest as there are plenty of gamers out there who do enjoy going back to uncover certain secrets without having to start a new game?

Raúl Rubio:  The game is not technically a sandbox, as there are points of no return during gameplay, but the areas you can explore are actually quite big. Taking in consideration what we have previously said about curiosity and the importance of collectibles, we are quite optimistic about people doing a second playthrough, for completion and a better understanding of the story.

Nothing to Reveal on the Switch Release Date at this Time:

Miketendo64: Now, were you were actually asked this already during IGN’s exclusive coverage of RiME, but since a month has passed since the question was asked, what’s the latest with the Switch release and are you any closer to a release date for it?

Raúl Rubio: That is something we will be confirming in the coming weeks. Stay tuned!

Miketendo64: Something else you were asked about is a soundtrack for the game. Since it is a month later (again,) what’s the latest with regards to releasing a soundtrack? Are there any plans to make it a reality or is it still something you can’t commit to/talk about at this time?

Raúl Rubio: RiME’s music is one of the pillars of the Game. The work done by composer David García is a true masterpiece, in my opinion. We definitely want to do something special with the OST, but again we will give more information in the near future.

Miketendo64: And now onto the Switch port? Since you’re not handling the port yourself, but Tantalus Media is, how did such an arrangement come to pass? Did Nintendo introduce you to the Australian firm, or was the introduction arranged by some else/other means?

Raúl Rubio: We are really lucky to have Tantalus Media as our partner for the Nintendo Switch version, as their work on Zelda Twilight Princess HD was phenomenal. Grey Box and Six Foot, our publishers for RiME, put us in touch.

Miketendo64: And because we’re talking Tantalus, just how much involvement do you have with the Switch port and do you know if there are any plans for the game to take advantage of certain Switch features?

Raúl Rubio: We are supervising the Switch version, making sure they have all the support they need from the team who designed the game in the first place. As for the Nintendo Switch specific features, we’ll give you more details soon.

Nothing to Report On Retail Release (Yet):

Miketendo64: Something else you have said with regards to Switch, is that you and your publisher Grey Box, are looking into production prices for Switch cartridges. How is that going?

A Work of Love:

Miketendo64: And since I’m nearly all out of questions, is there anything else you would like our readers and your fans to know about RiME at this time?

Raúl Rubio: We would like to say that making RiME has always been a work of love. We are a small team (the average number of people working on RiME has been 20 people), and we really poured our hearts and souls into it. Now that the game is about to come out, it really feels like a catharsis!

Raúl Rubio: We really want to say “THANK YOU” to all the people who have been following the game and didn’t lose faith on us during the years. We know it has been a long time coming, but we are almost there now.

While you may not have been able to answer all of our questions Raúl, we sure appreciate the ones you were able to give. Besides it just means there are a lot of announcements for us to look forwards to in the coming weeks. Best of luck with all your gaming endeavours!