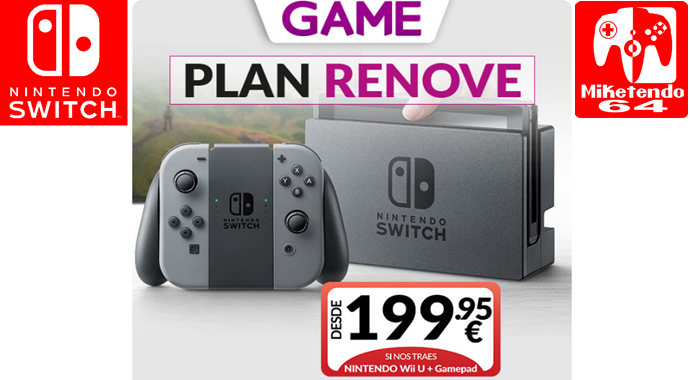 GAME España Offers Wii U Trade-In For Nintendo Switch From €199.95

Emails from Game España (Spain) are being sent out to their customers offering a trade-in plan to be able to purchase the newest console from Nintendo, the Switch,  from €199.95. This will mean parting with your Wii U & Gamepad and also a few games as well to get as close to the minimum offer as posible. I personally won’t be parting with my Wii U any time soon, as tempting as the offer may be as I do have The Legend Of Zelda: Breath Of The Wild for Wii U on Pre-order along with the new Zelda amiibos as well.

On the subject of Zelda Breath Of The Wild, Game España are also offering a trade-in of various Wii U games to be able to purchase the game at €29.99. This is also another suck in, as Game España are offering  €16 for New Super Mario Bros U and just Dance 2017 for €14. The catch is that both the game and box must be in perfect condition. If you can read Spanish, you can see for yourself below.

Will you any of you that reside in Spain be taking advantage of this offer? Do any stores in Your area offer anything similar that you would like us to share with our readers? Let us know in the comments below or email us at miketendo64@gmail.com