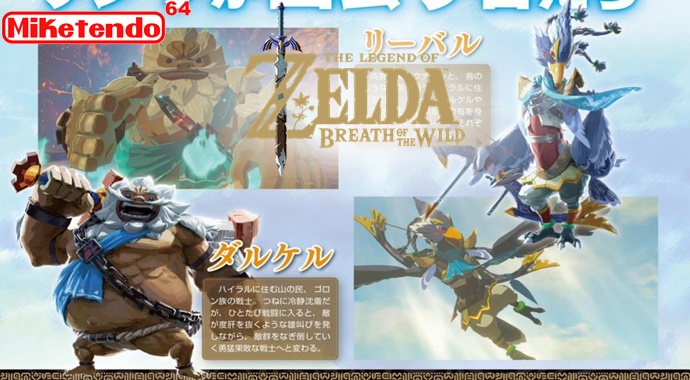 Japanese Videogame Publication Famitsu has shed some light on some of the new characters that you can expect to meet in The Legend Of Zelda: Breath Of The Wild. some characters come from races you may recall from previous Zelda titles including Zoras, Gorons and also Ritos.

First off is of course Princess Zelda of the Ruined Kingdom of Hyrule. She sets off to investigate the ancient ruins scattered around the world. According to Famitsu, she is a wise and curious girl with a deep complexity. She seems to have a more active role in this game than she has had in previous Zelda games and would be interesting to see if she also participates in battles.

Mipha is a Zora girl who resides in Hyrule and happens to possess a unique power that no other Zoras have. As a result, she is somewhat introverted and doesn’t talk very much. She also wields a spear which Famitsu wonders if she will use it at some point in the game.

Daruk is a Goron Warrior who has taken refuge in the mountains of Hyrule. He is normally a calm soul but when entering battle, his demeanor changes and becomes a very brave warrior that screams loudly whilst sweeping away his enemies.

Revali comes from the bird-like Rito tribe (from The Wind Waker) that lives in the skies above Hyrule. He wears a blue scarf much like Daruk & Mipha which may hint at a connection between these characters though they all possess different weapons.

No information has been shed about any of the other characters in the game but from what was seen in the Switch Presentation trailer for the game which came out Jan 12, it seems that the Gerudo, Koroks and the great fairy are also inhabitants of this new Hyrule.

Along with some old favourites, it looks like we can expect to see some new species in Breath of the wild as well, but I guess we will just have to wait a little bit longer until they get some coverage or until we can finally play the game ourselves.


Categorised in: Nintendo Switch, The Legend Of Zelda, Wii U