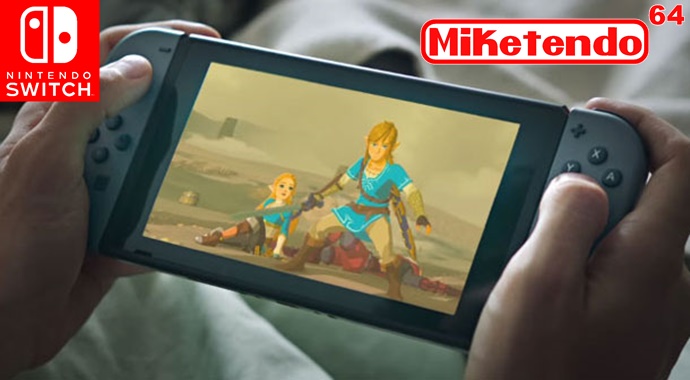 Nintendo Reveal Their Plans for a Huge Super Bowl Ad!

Remember last year when it was revealed Pokémon GO would have an ad played during the Super Bowl? Well this year will see Nintendo give the Switch some Super Bowl ad love and we’ve got the official press release that talk about such ad, and when we can expect to see it:

“For the first time ever, Nintendo will run an ad during the Super Bowl. The 30-second spot, which along with an extended 90-second version can be viewed at http://www.youtube.com/nintendo, builds on the worldwide excitement for the new Nintendo Switch video game system and The Legend of Zelda: Breath of the Wild game, both of which launch March 3. The ad also features a new song by Imagine Dragons called “Believer” that premiered worldwide Jan. 31.

The star of the ad, which is scheduled to run during the game’s fourth quarter on Feb. 5, is Nintendo Switch, which combines the power of a home console with the mobility of a hand-held video game system. People can play on their TVs at home, then grab Nintendo Switch and continue playing seamlessly wherever they go.

The ad also shows off The Legend of Zelda: Breath of the Wild, which breaks conventions to become the next defining moment in the classic franchise. It offers the most immersive world that Nintendo has ever created and sends players on an adventure they will never forget.

The soundtrack to Nintendo’s ad, “Believer” by Imagine Dragons, is available now on iTunes, Apple Music, Google Play, Amazon mp3 and Spotify, and is part of an upcoming new album from the band. This is not the first collaboration between Nintendo and Imagine Dragons, whose members are longtime fans of the video game company and The Legend of Zelda franchise. At The Game Awards in 2014, the band closed the show by performing a medley of music from The Legend of Zelda: Majora’s Mask with veteran Nintendo composer Koji Kondo.

The extended cut of the ad demonstrates the versatility of Nintendo Switch by showcasing the system in a variety of locations where home video games are not traditionally played, from a classroom to a kitchen to a laundromat. It also shows a number of upcoming single- and multiplayer games for the system, and how Nintendo Switch introduces fun new ways to play.

The names and launch timing of Nintendo Switch games featured in the extended cut include The Legend of Zelda: Breath of the Wild (March 3), 1-2-Switch (March 3), Mario Kart 8 Deluxe (April), ARMS (spring), Splatoon 2 (summer), Just Dance 2017 from Ubisoft (March 3) and Ultra Street Fighter II: The Final Challengers from Capcom (launch timing TBD). Nintendo Switch will be available at a suggested retail price of $299.99.”

And because we can, here is both the ad that will be played during the Super Bowl, and the extended cut:

Just over a month to go now guys! The Switch hype is getting real!


Categorised in: Nintendo Switch, The Legend Of Zelda