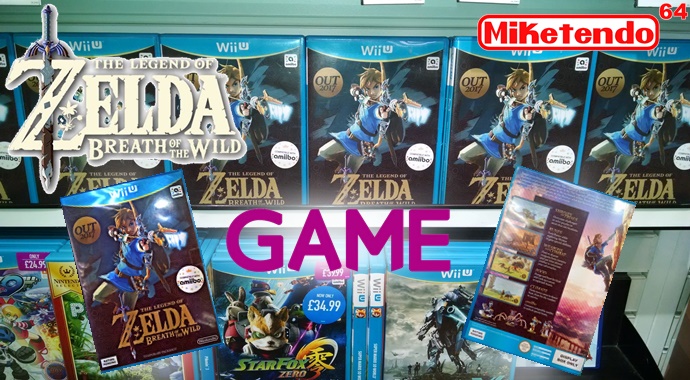 During a recent visit to the UK to visit my Grandparents. I found time to stop by a GAME Store in the midst of its post-christmas sales and was delighted to find an aisle dedicated to the upcoming Legend Of Zelda game Breath Of The Wild. Even though they were only display boxes and not the final official box art. I was half tempted to ask if I could have one. The back of the box lists the features that you can expect from the game including amiibo support, the changes of weather and climates and that you must gather different foods and cook them to regain health.

Regardless of the rumours that we have been hearing that Zelda: Breath Of The Wild will no longer be launching in March, an advertisement in the store still states a March 2017 release, at least for the Wii U version.

It is nice to see a relatively strong advertising campaign for this game even if it is mainly directed towards Wii U, which still shows that Breath Of The Wild is coming to the console and is the last Nintendo 1st party game for the System.

On another note, GAME has already started advertising for the Nintendo Switch as well. The Ad entices you to pre-order the Switch console now and you could be in for a chance to win a free Switch and a Launch game. You will be required to give a £20 deposit but who doesn’t like to a chance to win a free games console?

All that is left now is the Switch Presentation on Jan 12th which will shed more details on price and most importantly, what games you will be able to play on it at launch. Less than to weeks to go now!