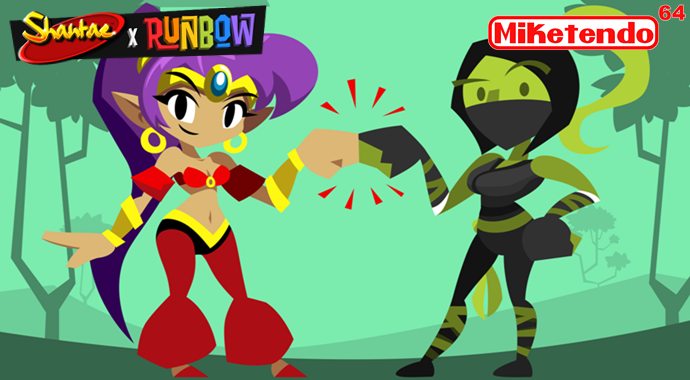 13AM Games has just released the final update for Runbow which includes Shantae the half-genie as a playable character along with several bug fixes and small changes. The retail version, Runbow Deluxe has also been pushed back until November 1st which is only a delay of a few days so it’s not the end of the world. You can check out the full list of bug fixes and changes below.

– [DLC] Shantae has been added to the game as a free DLC!
– [Gameplay] Fixed a bug where moving platforms would stop disappearing if they were moving when they disappeared
– [Input] Fixed a bug that didn’t allow more than one Nunchuk to be used at the same time
– [Input] Fixed a bug that impeded any input if a direction was hold in the stick in a Classic, Pro or Nunchuk Controller
– [Online] Added full compatibility with Runbow Deluxe!
– [Online] Fixed a bug where trying to join a full private game would impede the game to play online until restarted
– [Online] Fixed a bug where trying to join an almost full private game with multiple local players would crash the game
– [Online] Fixed a bug where losing connection during a cheers of jeers screen with lock the game in that screen
– [Arena/KotH] Fixed a bug that let you play single-player Arena and KotH by going back to the Character Select screen
– [Space Adventure] Fixed the numbers in some ‘monster closet’ stages’ descriptions
– [Localization] The descriptions of two of the Satura’s Space Adventure Records have been translated properly
– [Localization] The German translation of some of the “DLC TV” messages has been fixed
– [Gallery] The Talent Scout Record is no longer unlocked earlier if the Lilac free DLC has been downloaded
– [Gallery] Shantae has earned a spot in our Gallery!
– [Gallery] The highlight for Gallery items has been recentered
– [Gallery] A row of records that was slightly misplaced has been moved to its proper position
– [Misc.] The new 13AM Games logo is now featured in the Intro and Credits scenes
– [Misc.] Player names with spaces are no longer displayed in a different font in the online Character Select screen