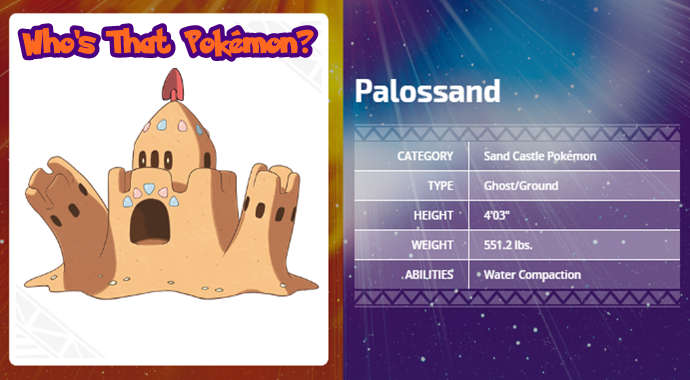 Welcome back to “Who’s That Pokémon?” the feature series regarding the Pokémon we can expect to see in the upcoming games. From Rowlet to Magearna, and Tapu Koko to Alolan Raichu, we have covered them all, but now that another Pokémon have been revealed this month, its time they got their own instalment of Who’s That Pokémon? So join us as we do a post all about Palossand!

Description: “Palossand controls human adults, making them build a sand castle that provides camouflage and also raises its defensive abilities. Unlike Sandygast, if Palossand loses some of the sand from its body, it can restore itself on its own. When moving about in search of prey, the shovel on top of Palossand’s head revolves. It’s said that the shovel could be serving as some kind of radar.

“Palossand loves the vitality of Pokémon and drags small Pokémon into its body so it can steal their life force. Its sandy vortex swallows them up in a heartbeat! Pokémon dragged into Palossand leave traces of their ill will behind. It’s thought that this negative energy may be the starting point of new Sandygast…”